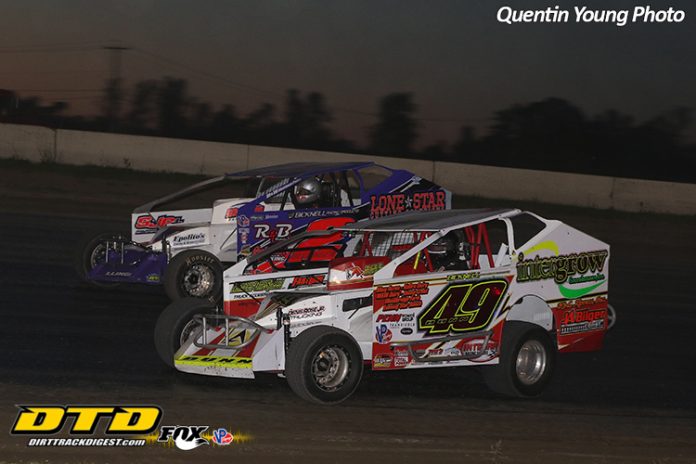 Billy Dunn, Tom Sears Jr., Chad Brachmann and Robbie Bellinger appeared in line for a solid finish at the 358 Modified DIRTcar Series opener at Can-Am Speedway on Wednesday night, but sadly the quartet all left the track before the checker flag flew.

Dunn had the biggest heartbreak as he was leading or second to eventual winner Tim Fuller throughout the event.

The 49 appeared ready to capture the win in the 60 lapper, but on the 57th lap, while leading, coming off turn two the car slowed and he was done for the night.


The Watertown driver had started outside of the second row and he battled Fuller continuously. On the 18th lap he took the lead for the first time on the slick, smooth track.

In regards to running night two of the series at Fulton he said, “We were planning to, but now I just don’t know.”

Reflecting a bit on the mechanical problem he explained, “It might have been a product of track conditions in recent weeks. It’s no ones fault as the weather has created different conditions out there. Usually this is a smooth track like tonight. I think now it will be more of the normal now.”

Chad Brachmann made the trip from Western New York and drew the eight for his starting spot. He was running just outside the top five with 23 laps to go when he too saw his night come to an abrupt end.

Afterwards he said, “The belt broke on the water pump. I’ve had nothing but bad luck.”

With his overall misfortune hanging over him he jokingly said, “Whatever I did to piss off someone I’m sorry.”

He hopes to be at Fulton on Thursday night and said, “I am looking for parts and I may have to have someone from home bring those parts to Fulton tomorrow.”

Tim Sears Jr. started 11th and on lap 46 had worked his way up to fourth place and into contention for a podium finish.

However, he would not finish.

His dad Tim Sears said, “It was a fuel pump. I got it fixed to a point, but we’ll need to go to work when we get home. We cleaned it up tonight and will fix it tomorrow after work. Tim had a good car tonight and was really good on restarts. I think we had something for them.”

Meanwhile, while Dunn, Brachman and Sears have a shot at getting their cars ready for Fulton the same might not be said for Robbie Bellinger.

After starting on pole the Bridgeport driver ran with the lead pack throughout the time he was on the track.

However, he slowed suddenly and headed for the pits late in the event.

Car owner Jeff Hayes was a bit disheartened after the event and said, “It might not be good. The fan blade broke and took out the water pump and belt. He lost the power steering and the engine started to get hot. We might have hurt the engine as there was all kinds of hardware in the belly pan when we looked at it.”

The series opener proved exciting as Fuller came home with the win after some classic duels with Dunn. However, such is the sport of racing as some nights you just don’t get to the finish line as the Fickle Finger of Fate selected other outcomes for your.