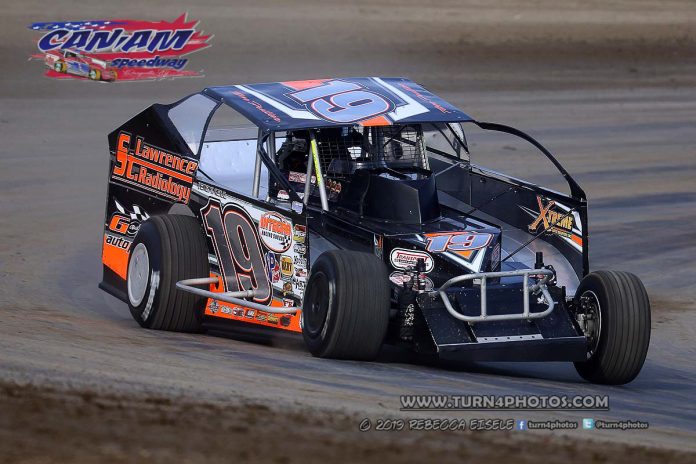 Coming into Wednesday night’s DIRTcar 358-Modified Series opener at Can-Am Speedway, Tim Fuller had yet to secure a win during the 2019 campaign.  The Edwards, N.Y., driver just hasn’t had any luck.  He was coming off a 2018 season in which he dominated his home track Mohawk International Speedway en route to racking up a season total of 15 wins.

It seemed that Fuller’s winless streak was going to stay in tact in Wednesday’s 60-lap feature as he led early before giving up the lead to Can-Am Speedway dominator Billy Dunn.  Then something went south on Dunn’s No. 49 handing Fuller the lead and the win.

“It’s just been dumb stuff and I can’t catch break,” said Fuller of the winless streak.  “I haven’t won all year.  It’s been a struggle and I don’t know why.  As strong as we were in the fall, then you come out and just suck.  It’s terrible.  We didn’t even know why.  We’ve been running in the top three lately everywhere we go, but we just can’t capitalize and get wins.”

He capitalized Wednesday as he was in the right place at the right time to secure the lead at a track that he knows very well.  He called Can-Am home for several seasons on Friday night’s before making the change to Mohawk.    It was a feel-good hometown win for him.


“Can-Am has always been good to me,” he said.  “This is kind of cool.  Its’ always good to win in front of the hometown crowd.  My daughter was here and she doesn’t get to many races.  That is pretty cool she is her.  I’m looking on the bright side, at least I got one so I can’t be shut out.”

The battle for the win with Dunn prior to his misfortune was a good one.  Fuller was out in front before Dunn tracked him down and passed him on the bottom of the speedway.  As the race went on Fuller got better and the pair swapped the lead numerous times for an eight lap stretch.  An untimely caution cleared the traffic allowing Dunn to cool his tires and get back away from him.  It looked like that was going to be how the race finished until Dunn broke.

“He was better on the short run,” mentioned Fuller of Dunn.  “He had a little bit different tire than I did.  We needed long greens and some traffic.  He found the bottom first.  That kind of screwed me.  I was out cruising through the middle and I wasn’t going to move until I saw somebody.  I was taking care of the right rear.  He snookered me.

Rudolph Best of Rest at Can-Am

Erick Rudolph started the main-event from the ninth spot as he looked to grab his fourth feature event win in the last five days.  The Ransomville, N.Y., driver made a late charge to come up just short at the conclusion of the race to Fuller.  He finished second.

“Obviously when you roll into here Dunn is the favorite and if you go to Mohawk Tim is the favorite,” stated Rudolph.  “They take care of things up here.  We found ourselves at the end of the race mixing it up with them.  Earlier in the race we almost had Fuller a couple times.  Billy looked like he had it in the bag until something went wrong.  We just hung around until the end of the race.  We were the best of the rest behind them two.”

Another Third for Williamson

As of late it seems the best Mat Williamson can do is third in big races.  It’s just over a week he’s been third in a Short Track Super Series race, third in a Super DIRTcar Series event and now third in a DIRTcar 358-Modified Series feature as that’s where he crossed the line on Wednesday night.

Williamson was in the preferred lane on the inside for several restarts late in the feature go allowing him to make up some ground.  He wasn’t as good on the longer runs, but he made the most of the opportunities to restart on the inner groove of the speedway.

“We were good on restarts,” cited Williamson.  “The long runs we weren’t that good.  We just tightened the car up too much.  I thought it was going to be slippery and it took rubber.  That was the end of that.  We were good with straight-line drive.  That’s what made it good on restarts.  We could get two or three cars.  That’s what you have to do when it’s rubber down like this.  The car was good.”