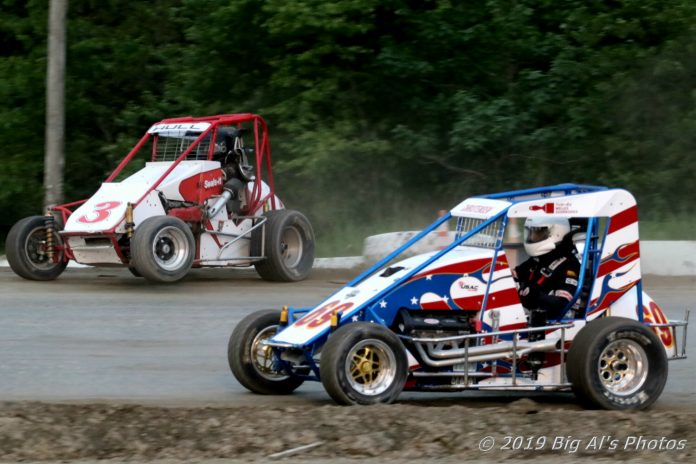 The USAC Dirt Midget Association and the INEX Legends will hold the first auto races on the new venue as part of Foxwoods Resort Casino 301 Weekend on Friday July 19.

Billed as the Friday Night Dirt Duels presented by New England Racing Fuel, the event is expected to attract NASCAR drivers in both the Legends and Midget events. With a modest $10 adult admission charge (which includes open garage and pit access,) no charge for kids 12 and under, $3.00 hot dogs and $3.00 draft beer (while supplies last) the event is expected to attract a number of race fans as well, especially since the NASCAR Monster Energy Cup Series, Xfinity Series, K&N Pro East Series and Whelan Modified Tour will all be racing on the 1.058 mile paved track over the weekend.

Monster Energy Cup Series drivers Corey LaJoie and Daniel Hemric will race in the 35-lap U.S. Legend Cars International feature event with fellow Cup Series driver Ryan Blaney serving as Grand Marshal. “It’s been forever since I drove a legend car and I’ve never raced anything on dirt,” said LaJoie, whose father and grandfather were both New England Stock Car standouts. “I’m sure I’ll figure out the new flat track at NHMS pretty quick and put on a good show with Hemric.” The winner of Legends event will take home $2,000, which is the largest legends purse in the Northeast this season.


Celebrity drivers are also expected for the Midget portion of the event, though details have yet to be finalized.

“It’s quite an opportunity for any series to get your cars and drivers in front of fans who may not have been previously exposed to this type of racing,” said USAC’s Richie Murray.  “For a series like the USAC DMA and dirt open wheel racing in general in the Northeast, this can be a chance to open some eyes and create some intrigue in front of fans who are wanting to see something a little different.”

“We’re always looking for ways we can improve the fan experience and add new features to our race weekend to give fans more opportunities to see the drivers and enjoy racing,” said David McGrath, executive vice president and general manager of NHMS. “The Friday Night Dirt Duels will be a low cost, high energy event with some fan-favorite drivers racing in a short track setting. This is going to be a great show for New England race fans.”

“This is an incredible opportunity for our teams to be racing at such an iconic venue such as New Hampshire Motor Speedway,” said Mark Hann, series director for USAC Dirt Midget Association. “The fans will be seeing a historic event.”

The last USAC race held in conjunction with a NASCAR event at MHMS was run in September 2007, when J.J. Yeley drove an A.J. Foyt owned Silver Crown car to victory.

Heat races start at 7:30 p.m. with gates opening and practice starting at 6:00 p.m. Since there are no grandstands, the speedway has advised fans to bring lawn chairs and blankets for seating.

Old Fashioned Networking NHMS and INEX Legends are both subsidiaries of the Bruton Smith controlled Speedway Motorsports, so it’s no surprise that the Legends were selected to open the new track. How the DMA got there is a little more complicated and nuanced.

Mark Hann of East Granby, CT is series director for the DMA and handles their public relations and marketing.  He’s also President and CEO of Victory Motorsports Marketing, LLC and is closely affiliated with the North East Motor Sports Museum, which is located on NHMS property.

With all those hats to wear, he frequently touches base with the principals at NHMS. “In February of 2018 I had lunch with Bill Quigley, the Vice President of Marketing for NHMS. He mentioned that they were going to be building the new track and asked if I’d share my thoughts on the project with him and he asked if I knew of any series that might be interested in racing there in 2019. I said yes to both. That led to a whole series of meetings and negotiations, which finally brought us to where we are today.”

“Mark did a marvelous job on this,” said series leader and Hall of Famer Skip Matczak. Without him we wouldn’t be where we are. We also had a guardian angel named Bentley Warren looking out for us and when Bentley talks, people listen.”

By The Numbers The Flat Track, located directly behind the North East Motor Sports Museum, is the first track to be built in New England in the last 25 years. Crews used more than 3,000 tons of clay to transform a 186,000 square foot plot into a quarter mile track. Construction began last fall, and a ribbon-cutting ceremony took place on June 6, 2019. The first races were held last weekend, when motorcycles competed in conjunction with Laconia Bike Week.

Fourth Track The new dirt track is the fourth one currently in operation at NHMS. In addition the principal track, a 1.058 mile paved speedway,  there’s a quarter mile paved oval in turns one and two of the speedway for Legends and Bandeleros, and a 1.6 mile road course, used by both Legends and motorcycles.

Midget Tests Successful On June 6, Seals-It teammates Will Hull and Seth Carlson participated in demonstration runs for MHMS management.  Both drivers liked what they experienced.

“One thing I can tell you is that the promoter was willing to do whatever we asked to tweak the surface,” Hull reported. “I suggested grading a little cushion into the outside of the turns and once they did that, we had a great outside groove for racing.  They took good notes and they assured us that’s the way they’d have the track prepared on race day.”

The facility reminded Carlson of another Midget track. “The inside berm reminded me of the Chili Bowl,” he said. “They have a great facility and all the equipment they need to maintain it. It means a lot to me that the DMA has this opportunity to show what we can do.

Nary a Naysayer Other than a couple of potential participants – let’s call them Miffed Midgeteers – who were somewhere between crestfallen and chagrinned that the Legends were running for $2,000 to win while the Midgets were running for trophies only, it was impossible to anyone in the DMA pits at Bear Ridge Speedway who wasn’t enthusiastically awaiting the July 19 NHMS event.

Johnny Philips, who owns the DMA Midget driven by his son Justin, says that everyone he knows is pumped up for the event. “This will be a very big deal for the DMA and while some people might be a little nervous about it, everybody is working hard to make sure it succeeds.”

Denny Zimmerman, the 1971 Indianapolis 500 Rookie-of-the –Year who recently retired as a DMA driver also weighed in. “I think it’s fantastic,” Zimmerman said. “They’re going to have a lot of fans there from NASCAR and they’re going to get introduced to our Midgets. They’re going to see what a great show we can put on.  We have more than a half dozen cars that can win on any given night, not counting the occasional dark horse. I understand that the race track up there is wide enough so there’s enough room for some good racing.”

Butch Elms,  the Bear Ridge Speedway co-owner and promoter who  gave the Midgets a home after Whip City Speedway closed in 2010 (and let’s be honest, there are few things in life sadder than a bunch of homeless Midgets) doesn’t have a financial stake in the upcoming event, but he’s an enthusiastic supporter. “I’ll be there and I’m looking forward to it,” he said.  “It seems like racers are always looking for a new adventure and this sure will be a new adventure.”

“We’re very grateful to Butch and April May Elms for giving us a place where we could show people what the Midgets can do. I think this event at NHMS will be the glue that holds our group together and helps us grow for years to come,” Skip Matczak said.

Support From On High Although the USAC home office in Indianapolis wasn’t involved in the negotiations that led to the race being scheduled, once it was announced the organization vigorously supported it, printing the NHMS press release in toto on the USAC website, while getting its formidable PR operation into gear. USAC classifies the Dirt Midget Association under the Speed2 umbrella, basically meaning that it doesn’t use high dollar, high horsepower “National” engines, employing Ford Focus, Chevy Ecotec and General Motors Quad 4 power instead.

“With DMA and the Speed2 series, it’s all about providing racers a place to race regionally and chase a championship without breaking the bank,” said USAC’s Richie Murray. “It’s a series for drivers on the way up who want to gain experience and for the already-experienced drivers to race on a budget.  Over the last few years, we’ve certainly seen that with competitive racing across the board while getting to see drivers like Adam Pierson, for example, move up and have success in USAC National competition, so it’s definitely made its presence known within the racing community.  Now with the addition of a marquee event for DMA in New Hampshire, it gives the drivers a chance to be in the spotlight with a little more attention on them in front of an audience from a different sect of the racing world.”