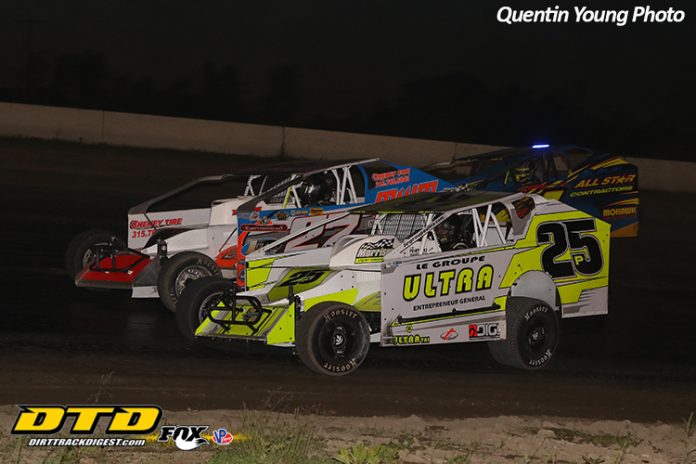 Michael Parent is a former Lucas Oil Empire Super Sprints Series regular and even has a Central New York Speedweek title to his credit. The Granby, Que., driver holds six career wins with the series including a win at Can-Am Speedway. Thursday night Parent returned to the facility, albeit in a much different car as it was the opening round of the DIRTcar 358-Modified Series.

It was the second time that Parent has taken his show on the road in 2019. His last foray out of Quebec came in a trip to the Orange County Fair Speedway back in April. That didn’t end nearly as well as his Thursday night effort where he mixed it up with the best in the North Country before coming home with a fourth place finish.

Parent had the misfortune of being on the outside on nearly every restart. That was not the preferred lane causing him to give up a few positions during the race. He ran as high as third before a couple restarts shuffled him back in the running order.


“That kind of killed us,” he said about the restarts. “Overall we are really happy. These kinds of tracks are not what we are use to running in Quebec. We are use to a lot more grip. We normally struggle on these kinds of tracks. Tonight, Matt Hearn from Teo was here and gave us a lot of support and DIG Racing Products helped with the shocks. We are getting good on every kind of race track which I really like.”

It’s been a learning curve for Parent in the Modifieds.  It’s taken some time, but he’s finally coming into his own. He has a win in 2019 at Le RPM Speedway and had a breakout campaign last year winning at both Autodrome Granby and Autodrome Drummond.

“I think it’s a different game,” commented Parent about running Modifieds. “It’s not just about being a good driver. It’s about learning what you like on the car. No one is the same in the Modified stuff. Having a good group of people around you is important. I’ve had Teo cars now for three years and Morrison Engines has been doing a great job. We have a package I really like and we aren’t following anyone else.”

As for the Sprint Car, Parent misses them, but things in life are different now as he has a family. The ability to race close to home was just too much to pass up. He still gets to see his Sprint Car friends twice a year as typically teams park at the Parent residence after Autodrome Granby allowing everyone to get together for some fun.

“I enjoy watching them and having fun with the boys,” cited Parent. “They are all still my friends. This is the second time we’ve traveled this year. If I was still running the Sprint Car it would be the 30th time. I got a family now and my dad is at home working with mom. I’m living the dream. I really appreciate it. They do it all for me.”