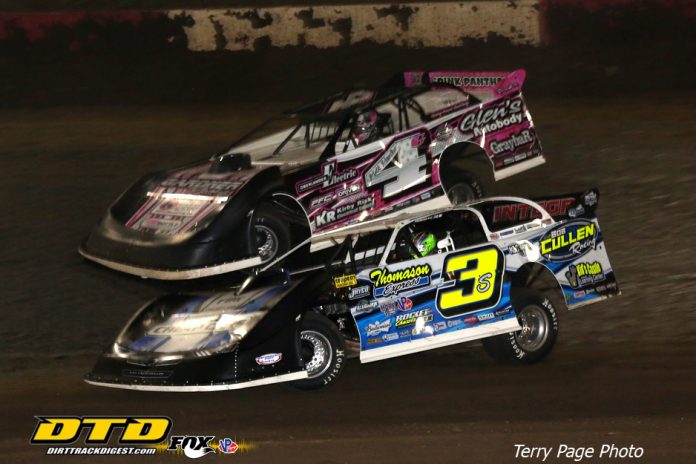 PEORIA, IL – The 19th Series visit to Peoria Speedway was a stellar one as fans packed the stands on Wednesday night. Twenty-six DIRTcar Late Models checked in for the $5,000.00 to win round one make-up race for the DIRTcar Summer Nationals.

Brian Shirley claimed the VP Racing Fuels Checkered flag once again as he won from the outside front row. Shirley now ties Shannon Babb for the most wins at Peoria Speedway with four wins apiece.

Brandon Sheppard and Shirley sat on the front row of the 40-lap feature. Sheppard started off strong on the bottom until Shirley got a grip on the outside and powered to the lead. Bobby Pierce worked to the runner-up position with Frank Heckenast Jr. following in third.

At the beginning of the race, Pierce ran the cushion and was catching Shirley, but the top faded and the track became bottom dominant. Shirley checked out by a straightaway until he caught lapped traffic. Pierce and Heckenast caught the leader but couldn’t capitalize quick enough. Shirley got around Bob Gardner, a strong lapped car standing in his way, after forcing him out of the low groove.


Shirley then jumped to a healthy straightaway lead once again until he got behind Allen Murray. Pierce knew it was closing time as he tried to make room under Shirley, but it wasn’t enough, as the “Smooth Operator” settled for a back-to-back second-place finish.

Hackenast Jr. charged his way up to third and completed the podium after starting sixth. He appeared to have the fastest car on the racetrack, getting around Jason Feger for fourth and Sheppard for third in the early going. But once he reached the rear of Pierce’s Hoker Trucking #32, Heckenast ran out of room on the low side to get a nose underneath. Nonetheless, a strong effort put forth and another top-three for the “Hell Tour” veteran.

The DIRTcar Summer Nationals is back in action again tonight at the Brownstown Speedway in Brownstown, IN. Catch all the action LIVE on DIRTVision!

New in 2019, every DIRTcar Summer Nationals and Summit Racing Equipment Modified Nationals event will be broadcast LIVE on DIRTVision.com with a DIRTVision Late Model Fast Pass, powered by DirtonDirt. For the latest news, follow the @SummerNationals on Facebook and Twitter. The Summit Racing Equipment Modified Nationals runs parallel to the DIRTcar Summer Nationals. Information on the Modifieds can be found at modifiednationals.com.