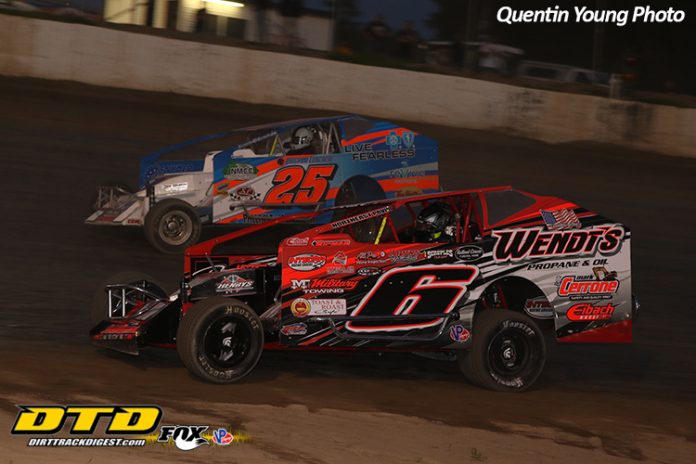 After finishing third on Wednesday night at the Can-Am Speedway Mat Williamson was getting a little tired of podium finishes without being able to crack victory lane.

The number three was prevalent again for Williamson on Thursday night at the DIRTcar 358-Modified Series Showdown at Sunday at the Fulton Speedway.  That was his starting position and it ended with another number three as in his third career series win.

“This means a lot,” commented Williamson.  “We’ve had success here (Fulton), but nothing ever shows.  Last year honestly, I felt like we could win the Victoria 200 (Outlaw 200) and we didn’t win it.  I feel like we had a good car when we came here.  This was similar to that, minus the motor.  We applied that and put it into tonight.”

Williamson utilized a W-16 engine in his Bicknell for the night’s program.  That proved to be the difference maker as Williamson was able to get a strong restart on lap 78 from the outside of the front row.  Williamson charged past Erick Rudolph at the green.  He cited the engine combination as the reason for his impressive restart.


“As a driver there are things I’m not good at and there are some things I’m good at,” stated Williamson.  “Luckily, restarts are something I feel like I have an advantage at.  With the W-16 motors, when you get them wound up you can’t spin your tires.  It helps so much on the restarts.  When you do restart you have clear track ahead of you and it’s unbeatable.  There are advantages and disadvantages to every deal.  We were just fortunate it showed on that last restart.”

After assuming the lead, Williamson was challenged late in the feature go by slower traffic.  He was not going to be denied as he got aggressive.  There was no way he was going to give up a chance at the victory.

“I just raced more aggressive than I did earlier in the race,” cited Williamson.  “There were a couple of lapped cars I just drove it in really hard.  If they bounced off my side bar, they bounced off my side-bar.  I wasn’t going to lose another race in traffic.  Luckily we got some breaks.  Once you show your nose in the last 10 laps, they (slower cars) kind of let you go.  It’s cool to win for this team.  We’ve ran second and third twice, now we finally got a win.”

Erick Rudolph led a majority of the feature event only to have Williamson take the lead on the final restart of the 100-lap affair.  Rudolph felt like Williamson fired early allowing him to get the lead.

“The car faded a little bit, but we still had the car to win,” stated Rudolph.  “I feel like this one got taken away from us a little bit.  I’m not sure how they let a start like that go.  I’m disappointed, upset and confused.  I don’t know.  That’s about all I got to say about it.”

Danny Johnson’s car had a noticeable wiggle several times during the feature.  Johnson would come off the corner and the car would slow.  The culprit was a car that wouldn’t stay in gear.  Johnson dealt with the issue driving his No. 83 Bicknell home to a solid third.

“We had trouble with the car jumping out of gear so I ended up driving the car with just one hand the last 50 laps,” mentioned Johnson.  “I was holding it in gear.  That kind of messed me up a little bit.  I was just hanging on for the most part.  Hopefully we get that fixed.”

Dave Marcuccilli started the race from the outside of the front row Thursday night.  He didn’t get off to the best of starts fading back through the field to seventh.  As the laps clicked off Marcuccilli got better and better.  He was one of the fastest cars at the end of the race ending up fourth.

“We had a long run car,” cited Marcuccilli.  “The tires took a few laps to get heat in them to get going.  Once we got heat in them I could drive back up to everyone that pulled away from me.  We just got to figure that out a little bit.  Michael was looking at my times and I was one of the fastest cars at the end.  We are happy.  We were the first Fulton regular.”

The fourth backed up Marcuccilli’s top 10 finish from the night before at the Can-Am Speedway.  Although he finished worse than he started it was nothing to be upset about as he continues to learn the ropes of the 358-Modified division after years in the Sportsman.

“We are happy,” he said.  “I’m more happy with this one.  We were really good at the end.  We just got stuck racing with people and it was hard to pass.  I was on Mahaney’s bumper for what felt like forever.  With him coming up to the wall I just couldn’t get that that run on the outside enough to where he could see me.”

Mahaney ended the DIRTcar 358-Modified Series two day foray to Can-Am and Fulton Speedway with a pair of fifth place finishes.  The King Ferry, N.Y., driver doesn’t have a ton of experience with the motor combination utilized on the series so he leaned on his crew which payed off.

“Hats off to our Adirondack Auto 35 team,” commented Mahaney.  “The team has a history of small-blocks and I think that gave me a big boost in this series  I don’t have a lot of experience with the spec 358’s.  It’s a whole new venue for me.  I’m enjoying it.  The racing is really close and good.  Especially at tracks like Fulton.  It’s slick, it’s wide and there are sliders.  It’s fun.”

At times during the feature Mahaney was good enough to challenge Johnson for third, but he was unable to get along side Johnson on the slick surface to make his presence known.  He felt like he had more had he been able to make the pass.

“I thought we had a pretty good car on the bottom, but I wasn’t getting off the corners like I wanted to,” mentioned Mahaney.  “When I restarted on the outside of Danny Johnson in fourth we started getting really good runs.  I couldn’t get a lane to get next to him.  If I could have got next to him I think we had better speed getting into, in the middle and off the corners.  Down the straightaway I didn’t have the drive to get beside him. I would have liked to see what I could have down had I got by him.  I don’t know if I would have had room to get by the leaders, but we had a lot of speed in the car.”

Chad Brachmann had some bad luck on Wednesday night when he broke a belt on the water pump forcing him to retire early at Can-Am.  He started Thursday’s Fulton main from the 18th spot and completed the 100-lap duration in sixth.

“We were good, but by the middle portion of the race I think I used up all the sipes in my tires,” cited Brachmann.  “There are none left in them now.  I think I just used up everything I had to get from where I was.  We were close to a top five so I’m happy with that.”

Brachmann made sure to keep an eye on the engine temperature during the feature just in case the team had done more damage than originally discovered.  That was not an issue as he made it to the conclusion of the feature with no issues.