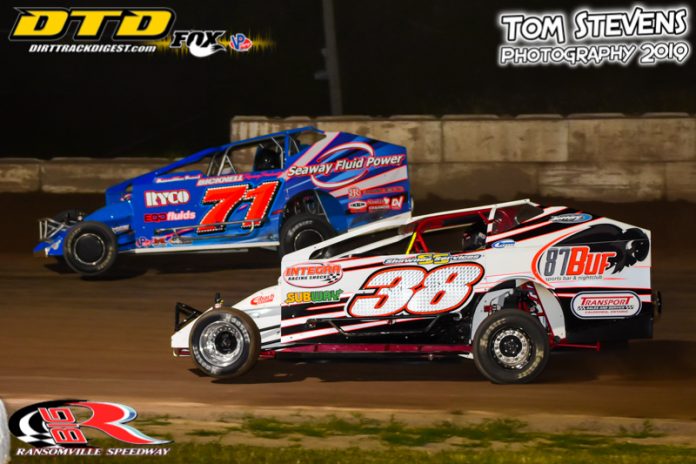 Greg Martin and James Sweeting led the field of Krown Undercoating 358 Modifieds to the opening green flag. Sweeting grabbed the early lead holding off Mat Williamson to win his qualifier earlier in the night.

Mike Bowman started sixth in the feature. He was up to fourth by lap 7 when the caution came out for Matt Farnham stopping on the frontstretch with mechanical issues. Two laps after the restart he got ahead of Martin to take over the second position.

Erick Rudolph came into the event a perfect three-for-three in 2019 at the “Big R”, and searching for his fourth-straight win to start the season. Rudolph had his work cut out for him after starting 12th was already up to fourth by lap 12.


The caution came out for the final time on lap 18 when Jeff McGinnis slowed on the track with mechanical issues. The set up a restart with Sweeting leading Bowman, Ryan Susice and Rudolph. Sweeting chose the outside line for the restart as he had favored the top side throughout the race.

Bowman was able to put together a solid run on the inside on lap 24 as he passed Sweeting for the lead in turn two. The pair made contact on back-to-back laps before finally separating. Bowman then drove away for the final five laps to earn his first Modified win at Ransomville.

Sweeting had to settle for second after leading 23 laps. Rudolph had his win streak snapped at three races with a third place run. Williamson and Susice rounded out the top five.

Defending Investors Service Sportsman track champion, Brett Senek, scored his second win of the season. Senek led all 25 laps in a race that was slowed only once for a caution. His strongest challenge came from Derek Wagner who landed in second place with eight laps to go.

After feeling the heat from Wagner, Senek moved to the outside line and was able to pull away in the final few laps to get the win.Wagner finished second followed by Jonathan Reid, Andrew Smith and AJ Custodi.

In the Ki-Po Chevrolet Street Stocks, Cory Sawyer dominated the 20-lap feature for his second win of 2019. The former track champion started on the pole and led every lap while en route to the victory.

Sawyer faced an early challenge from Jaren Israel in a great side-by-side battle. Sawyer’s car preferred the bottom lane while Israel tried to run the top. Israel eventually fell behind the leader, and had to switch from offense to defense when he was caught by Pete Stefanski during the second half of the race. Sawyer cruised to the win while Stefanski edged ahead of Israel on the final lap for second. Chris Dziomba and Ken Camidge rounded out the top five.

Mike Kramarz scored his third win of the season in the Gippster’s Collision Mini Stocks. Kramarz held off a hard-charging Chris Leone in the closing laps to secure the win. Leone drove through the field after starting last for the 15-lap feature. He made his way up to second place after just seven laps. Leone then erased a one second deficit to catch Kramarz.

Leone was on Kramarz’s back bumper for the final two laps, but could not overtake Kramarz. Kramarz held on to make his third trip to victory lane in 2019. Ashley Blech finished third behind Kramarz and Leone. Dave Dussault finished fourth after leading the first five laps of the race. Cole Susice rounded out the top five.

In the Stevenson’s Hardware Novice Sportsman, Bubby Pawlak passed Butch Zimmerman for the lead following a restart on lap 7. He then drove away throughout the second half of the race for his first win of the season. Zimmerman held off Mike Martin for second place. Tom Lalomia and David Fingerlow rounded out the top five.

Next Friday, July 5, features another full card of racing at the “Big R”. The Ransomville/Genesee Speedway Mini Stock Series makes another appearance, plus race car rides for the kids before hand. Racing starts at 7:15 p.m.
About Ransomville Speedway: Opened in 1958, Ransomville Speedway is located on Braley Road in the hamlet of Ransomville, just 20 minutes from Niagara Falls and Lockport. “The Big R” is a 3/8-mile DIRTcar sanctioned facility that is the home of the Summer Nationals. Ransomville also features a 1/16-mile Go-Kart track for action on the “Little R” on Thursday nights. For more information, please visit our updated website at www.ransomvillespeedway.com as well as follow us on Twitter @Ransomville and like us on Facebook. You can also contact the speedway by phone by calling (716) 791-3602 or (716) 791-3611. 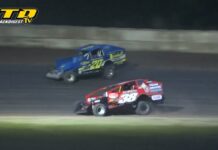