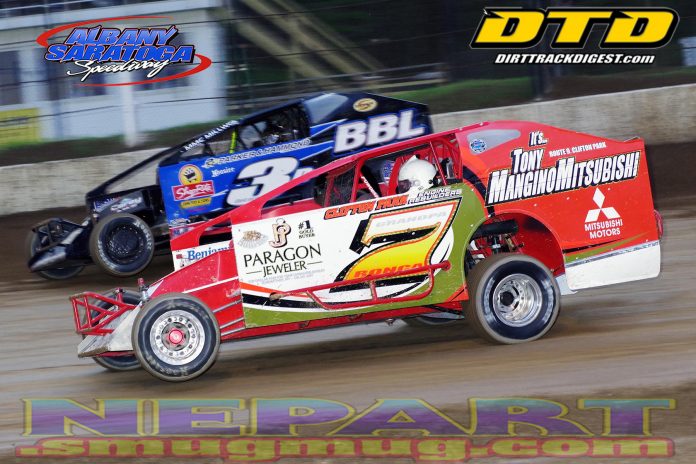 MALTA, NY – Two weeks ago, after finishing second in the modified feature at Albany-Saratoga Speedway, Matt DeLorenzo said he wasn’t going to stop tweaking his setup until he got it right.

Well, he didn’t have to wait long.

With his Bicknell chassis sticking to a black, slicked-over track no matter what line he was running, DeLorenzo chalked up his first win of the season Friday night in the 35-lap modified feature on Military Night that kicked off the 4th of July week.

Despite starting 12th in the feature, DeLorenzo only needed 14 laps to get to the front and then outran a hard-charging Marc Johnson to become the eighth different winner in nine modified features this season.

“We screwed up with tires last week and at the Big Show [Tuesday’s Super DIRTcar Series race, in which he finished 25th), but I think we learned a lot from those races,” he said after the victory. “My brother Mike is the brains of the operation and his birthday is on July 4, so this was an early birthday present for him.”


Running the bottom of the track, DeLorenzo broke into the top five after just nine laps, and on lap 12, he blew by both Rocky Warner and Mike Mahaney to take over second.

Running as low as possible, he nearly clipped the implement tire on the inside of the fourth turn on lap 14, but he had a ton of momentum coming off the turn and stayed inside Kris Vernold to get the lead.

Then, just as quickly, he swung to the top and began to pull away.

He opened up a huge lead, but that was negated on lap 18, when Reggie Bonner spun in the second turn.

DeLorenzo took the inside for the restart and stayed in front, but then switched to the middle and was never seriously challenged.

“I wanted to stay on the bottom, but after the restart, I didn’t seem as fast, so I began to run in the black to keep my momentum up,” he said. “But I was watching for someone to stick their nose under me, because if I saw someone, I was going to dive back to the bottom.

“This is the best the car’s been all year.”

DeLorenzo left Warner and Johnson to battle for second, and Johnson took over the No. 2 spot for good on lap 32, staying low in the second turn and squeezing past Warner.

Johnson had started 22nd in the field after getting caught up in a mishap during his heat race, and might have found some solace in finishing second, but that’s not the way Johnson ticks.

Derek Bornt recorded the first win of his career in the 25-lap Dean’s Electrical Shootout Series sportsman feature, which paid $1,000 to win. Bornt started on the pole and spent the first position of the race swapping the lead with Brian Calabrese. Calabrese moved back in front on lap 11, and seemed to have control of the race, but a yellow on lap 21 changed everything.

Bornt used the restart to regain the lead, and beat Calabrese to the finish line by .7 seconds. Tim Hartman Jr., coming off a Tuesday night win, had to settle for third. He might have been a contender for a second straight win, but went too high in the fourth turn on lap 16 and dropped back to sixth, costing him a shot at the victory.

Brandon Emigh drove to his second win of the season in the 25-lap pro stock feature which went caution-free.

Josh Coonradt, who started fifth, went right to the top at the drop of the green flag, and took the lead away from Dan Older coming out of the fourth turn on lap nine.

Emigh was following right in Coonradt’s tire tracks, and when Coonradt dropped down a lane, to the middle, Emigh had an opening on top and rocketed into the lead on lap 15. Emigh lead Coonradt and Older across the finish line.

“Once he moved down, I knew I had a shot,” said Emigh of Coonradt’s decision to give up the top. “I moved to the top, and here I am.”

Jimmy Duncan, who was an integral part of the pre-race ceremonies that included the Patriot Guard Riders and members of Gold Star Families, easily won the 15-lap Lake Auto Parts street stock feature. Duncan started third, made a bold move to squeeze between two cars to take over second, and had the lead by the time the third lap was completed.

From there, it was smooth sailing.

“To come through and get a win tonight is a big deal,” said Duncan.

Tucker O’Connor drove to his second win of the season in the Haun Welding limited sportsman feature, taking the lead after a restart on lap two and surviving getting help up by a lapped car to hold off Bill August.

David Frame passed Steve Ryan on the final lap to win the four-cylinder feature. Frame, Ryan and Jason Lang made up the top three double-cam cars, while Robert Garney finished fifth overall, and was the first single-cam car across the finish line.