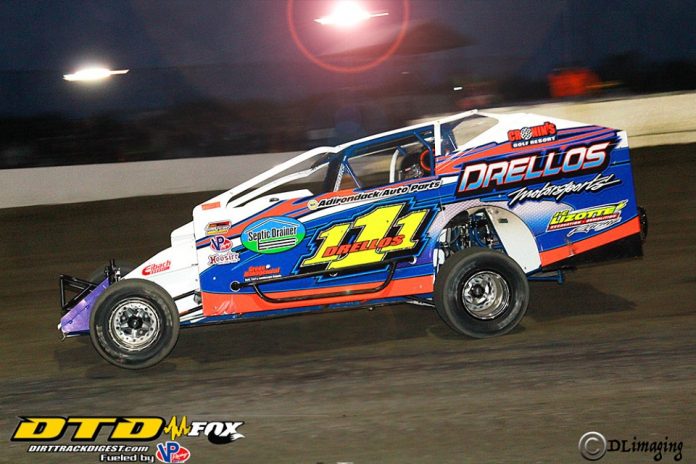 On a night that looked like Mother Nature was going to take over, the staff at the Mohawk International Raceway were determined to get the evening of events in sponsored by Smokers Warehouse. After a brief shower before race time, track crews worked hard and provided one of the fastest racing surfaces of the season.

The 30 lap Twin Leaf Stores 358 Modified feature went green and Demetrios Drellos wasted little time taking the top spot away over Matt Woodruff, Louie Jackson Jr., Lance Willix and Michael Maresca. The caution flew quickly as John Mulder slowed on the speedway. While under the same yellow Chris Raabe and Brian McDonald made contact with the front stretch wall. Raabe would be able to continue on while McDonald would be towed to the pits. When the green flew again and Drellos would pull away to 10 car lengths and showed no signs of slowing down. Behind the leader Matt Woodruff and Louie Jackson Jr. staged a war for the 2nd spot with Michael Maresca closing quickly from the number 4 spot. By lap 15 Drellos had over a half track lead and was on a mission to potentially lap the field. From 2nd on back Jackson was able to sneak by and bring Tim Fuller and Chris Raabe with him leaving Woodruff to battle with Maresca for the number 5 position. With 10 laps to go Drellos began to close in on the top 5 drivers to potentially put them a lap down. Tim Fuller did not want to be a part of that as he took over the number two spot and began to pull away. Over the final laps, which also featured no caution flags. No driver on this night had anything for the driver out of Queensbury New York, as Demetrios Drellos would lead the final 5 laps and handily beat some of the best at the speedway for his first 358 Modified victory at Mohawk in his young career. Tim Fuller would cross in 2nd, extending his run of top 5 finishes to start the year. Louie Jackson, Chris Raabe and Matt Woodruff would round out the top 5.

In Crossroads Tobacco Sportsman action it would be veteran Billy Cook taking the number one spot at the drop of the green flag over Delbert Legrow Jr., Andy Howard, Ben Wheeler and Delbert Legrow. The first three laps would go caution free until Greg Snyder spun his car in turn two bringing out the yellow. On the restart Billy Cook continued his great run as he held the lead yet again as Andy Howard moved to 2nd. On lap 4 Dustin Bradley lost the front end on his car and the yellow flew one more time. When the green flew Andy Howard started to make his move as he closed in on Billy Cook for the lead. On lap 5 it was Howard’s turn to take the top spot while behind the top two Mike Stacey, Brianna Ladouceur and Thomas Cook were making their way forward and trying for a top 5 spot. With the green flag laps clicking off Andy Howard began to enter lapped traffic which would be exactly what Thomas Cook wanted to see. With 4 laps remaining Cook was there to challenge bringing Mike Stacey and Brianna Ladouceur to battle for the top spot. A mistake in traffic was all Thomas Cook needed as he would get by on the bottom in turn 2, and begin to pull away. After navigating through the traffic Thomas Cook would march on with no issues to score his first win of the season in Crossroads Tobacco Sportsman action. Brianna Ladouceur was able to wrestle away the 2nd spot with Andy Howard taking over 3rd with Mike Stacey and Shane Pecore rounding out the top 5.

The 15 lap Novice Sportsman feature saw a great battle at the end but it was Dale Gonyo leading the field to green and much like the modified feature, was able to check out on the field early on over Joshua Pete, Gavin Riddell, Dan Reif and Dan Beachard. On lap 7 the first caution flew for Matthew Bourey who spun in turn two. When the green flew Gonyo continued to lead but Dan Reif emerged as the next challenger for the lead. Reif took over 2nd from Joshua Pete and quickly closed in on the leader. On the final lap Reif narrowed the lead to three car lengths, but that was as far as he could get. On this night Dale Gonyo put it all together and scored his first Novice Sportsman win since August 3rd of last year at Mohawk. Dan Reif came across 2nd with Joshua Pete Gavin Riddell and Nolan Swamp completing the top 5.

In the early laps of the Mod Lite 15 lap event Ian Bressett was the dominant driver as he led early on over Matt Fregoe, Nick Mallette, Kevin Foster and Jason Premo. Mallette would make his charge to the front as he got by Fregoe for 2nd but still had a long way to go to catch the leader as Kevin Foster was on the move from position number 3. With 5 laps remaining Mallette had caught Ian Bressett down the back stretch and was looking to make his move. On the next lap off turn two Nick Mallette powered by on the bottom lane for the lead bringing Kevin Foster with him to the runner up spot. On this night nobody was catching the 2017 track champion as Nick Mallette marched on to score his 2nd win of the 2019 campaign. Kevin Foster, Ian Bressett, Matt Fregoe and Jason Premo would complete the top 5.

The Bandit 10 lap event saw John Martin take the lead in the early going but it wasn’t long before Matt Zira would make his way to the front from his 7th starting spot as his rival Francis White would follow him to the front of the field. Zira would take the lead away as White would follow in line in position number two. Over the remaining laps White tried several times to make his way by for the lead and was looking his 3rd win of the season. Over the remaining laps Matt Zira did everything he could do, and it proved to be enough, as Matt Zira would march on claiming his 2nd win in a row and 2nd of the week as he won at Can Am on Wednesday night. White would cross in 2nd with John Martin making up the top 3.

Next week the 2nd leg of the three race MIR 358 Modified Series will highlight the night plus a full program in all division and fireworks. Long time supporters of racing, St. Lawrence Radiology will be on hand for the evening. Racing gets underway at 7:30pm with Canadian Money accepted at par at the main gates only. If you are traveling from Canada, remember to show your toll receipt at the main gate and receive a free bridge pass. For the latest new, results and division points, be sure to check out our website at mohawkintlraceway.com. Also be sure to follow us for all the latest happening at the speedway on Facebook and Twitter.