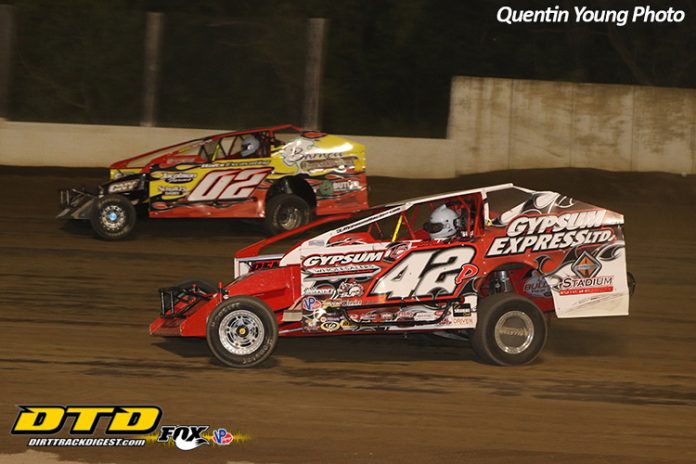 BREWERTON, NY – Pat Ward rolled to his first win of the year, grabbing the win in the Big Block Modified feature at Brewerton with a late pass on Ronnie Davis III.

Tim Harris led the opening circuits of the 35-lap Modified main, but surrendered it to high-flying Ronnie Davis on lap 4. Davis, who has had a tough season since his opening-night win, wasted no time opening up a big lead. By lap 9, the gap between him and second place Roy Bresnahan was up to a straightaway. Pat Ward slotted into third, while Jimmy Phelps got up to fourth in the early stages.

Ward worked over Bresnahan for a few laps on the bottom, finally making the pass on lap 15. Larry Wight was running fifth at this time, but not for long, as by lap 16 Wight was by both Phelps and Bresnahan for third. Davis still had a comfortable lead up front, but not for much longer.

By lap 20, Ward had cut the lead in half, and Wight was faster than both of the top two. Ward and Wight mowed down the lead, and Ward left his home on the cushion to drive under Davis on lap 26. Soon as Ward put a nose out front, the yellow flag waived and canceled the pass.


Davis went low on the restart, knowing that’s where Ward was making his pass before the caution. The move briefly worked, but a lap after the restart, Ward rolled the top by Davis and into the lead. Wight followed through on lap 30, but Ward already had a small lead built up. Wight gave chase, but couldn’t gain any ground in the final five laps, as Pat Ward became the sixth winner in six features this season. Larry Wight got second, with Jimmy Phelps nosing out Billy Decker for third. Ronnie Davis led most of the race, but slipped to fifth at the end.

“I knew Larry had to be right on my tail,” Ward said. “The car was good, it could do whatever I wanted it to. I think Ronnie overheated his tires, he took off like crazy. I think we would’ve been fine even without the caution. We needed this, you can’t even imagine how bad the past two or three nights have been, we haven’t even qualified some nights.”