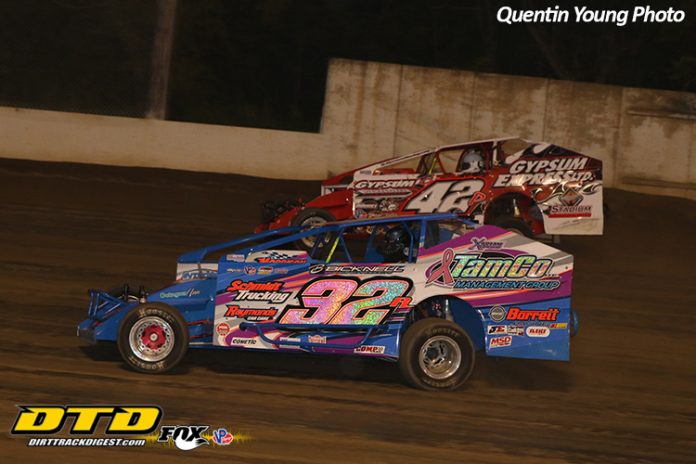 The last few weeks have been a struggle for Genoa, N.Y., driver Pat Ward. It didn’t seem to matter what his LJL Racing team did, they couldn’t get things right.

He struggled in DIRTcar 358-Modified Series action at Can-Am Speedway using a provisional starting spot to make the field. Thursday night with the same series at Fulton Speedway he lost a fan bland it time trials which forced him to start tail in his heat. He eventually qualified through the consolation. The car was better, but his finish wasn’t up to his standards.

“Nothing has gone right,” commented Ward. “I even rolled the car in the shop and Scotty and Brandon worked on my small-block for me yesterday. I think other than breaking early in time trials, that car was a lot better than it has been. Hopefully we are gaining on it.”

Friday night he got some relief and definitely gained on it as he picked up his first win of the season at the Brewerton Speedway.


“Oh my God I was ready to quit,” said a relieved Ward after the 35-lap win. “I’ve been so bad for two weeks now. I needed it. This feels really good. I was ready to load up and go home for a month or so, I was sick of it.”

By virtue of the rut he’s been in, Ward started the main from the inside of the fifth row. He worked his way into second then began stalking race leader and opening day winner Ronnie Davis III. It looked like it was going to be more bad luck for Ward as he went for the lead on lap 27 only to have the caution negate his pass.

At the ensuing green flag, Davis dove to the bottom of the speedway opening up the top lane for Ward. He powered by Davis for the lead on lap 28.

“I knew I could get him,” commented Ward on the pass for the lead. “I was more worried when I saw Larry (Wight) was up to third whether I was as good as he was or not.  I knew Ronnie was probably going to go to the bottom because he was really struggling on the top at the end. It didn’t matter to me; I was good about anywhere.”

Ward was right. After he took the lead he changed his lane on the speedway in turns one and two. Rather than run all the way around the top he drove in on the bottom before sliding up to a brown patch off of turn two. It was enough to keep the rest of the field at bay.

“I was losing too much time on entry up top or if I tried to stop and stay on the bottom,” cited Ward. “There was nice brown patch through the middle so I just tried to ride that. I was lifting the left front out of two so I knew I had to be pretty good.”

Larry Wight tried the best he could to come from the 14th starting position to the win. That late caution slowed up his momentum. He was right with Ward as he went for the lead. After the restart he just wasn’t as good.

“I didn’t need that caution because I think once I cleared the two lapped cars I could have let those two fight it out and sneak underneath them,” stated Wight. “I think we might have hurt the right rear a little bit. It didn’t fire as well once it cooled down. All-in-all we had a really good car. The track has changed a lot the last couple of weeks. I think we need to change up our tire maintenance a little bit.”

Jimmy Phelps started on the inside of the fourth row for Friday night’s finale. From there he maintained pace with the leaders but watched as Wight Billy Decker got by him. As the laps clicked off, Phelps got better. He eventually rallied for third.

“After halfway it seemed like, maybe we got some fueled burned off, I felt like it started coming back,” said Phelps. “We weren’t that by any means at the beginning. We had already lost some track position to some really good cars before we started rolling. About the time the yellow came out I felt like things were starting to happen. By then all the fast cars were there. You just got to hope for the best. I thought we were in the hunt. I thought we were as good in the latter stages as the guys in front of me. We just have to figure out how to get going a little earlier.”

After winning opening day at Brewerton Speedway, Ronnie Davis III has experienced some growing pains in the Modified. He severely damaged a race car a week later and has struggled to regain the form that got him the win. Friday night the Memphis, N.Y., pilot started sixth. He went to the top to get the lead and held onto until late race restart saw Ward slide by. He eventually fell to fifth.

“We’ve been struggling since that win,” said Davis. “I think that first opening night the stars aligned for us that’s why we had such a good run. I mean with all the track changes and that stuff we’ve been struggling with it. This gives us some confidence tonight. I think we are headed in the right direction now.”

Davis restarted as the leader on lap 27. He elected to go to the bottom instead of the top lane he’d been running much of the race. At that point he felt like he lost the handling on his No. 32.

Heat race wins for the 21 cars in the pits went to Davis, Andrew Ferguson and Tim Sears Jr…

Tim Kerr was involved in a hard wreck in the third heat. Kerr went three-wide with Tom Sears Jr., and Tyler Trump. Trump, the car in the middle of the action, moved up just bit to give Sears room causing him to make contact with Kerr. Kerr slammed the outside wall hard before going over. Fortunately he walked away unscathed but the same couldn’t be said for his No. 07 as it suffered extensive damage ending his night…

Chad Phelps believed he had a motor let go his car in the heat race ending his night as well. He started at the tail of the feature in Mike Fowler’s Sportsman car.