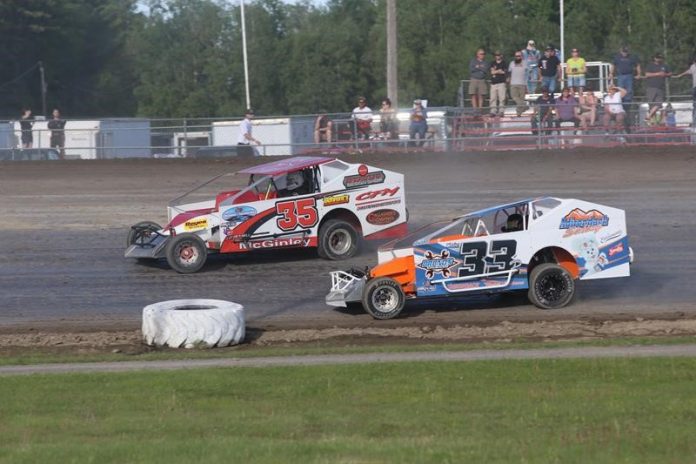 PLATTSBURGH, NY – Travis Bruno used the outside line to take advantage of the re-start, for his second win of the season in the Poirer’s True Value Sportsman.

Patrick Picotin led the field to the green in the 30 lap feature event, but after a caution four lap into the race for Jamy Begor, something went wrong with the 48 machine, sidelining him for the night.

That handed the lead to Codie Aubin, who led until the late stages of the event before Kyle Hoard brought out the caution with a handful of laps to go.

That put Bruno on his outside, and the 33R machine took off like a rocket to the front of the field.

Bruno would hold on to win the event, Aubin would come home second, point leader Adam Pierson would finish in third, Lonnie Rivers fourth, and finishing fifth was Derrick Mcgrew Jr.
Results for that event remain unofficial at this time.


Codie Myers would lead wire to wire, to pick up his first win in the Novice Sportsman division, in an event that went green to checkers.

Nathaniel Guay made a pass after the halfway point on Matt Leonard, to win his first career event in the Chris Frennier Motorsports Strictly Stocks.

The Dirt Modified Nostalgia Tour was also at the speedway for the first of two trips of the season.

Thomas Placey would pick up the win, Robert Johnson would finish in second, and coming home third was Meghan Ciglich.

The Ernie’s Discount Tools Super Stock division did not get their feature event in, due to rain hitting the speedway. That event will be run at a later date in the season.

Monday night July first, the track is back in action with the $10,000 to win Border Battle 100 as part of the Big Block Modified Super DirtCar Series. The Poirer’s True Value Sportsman will also be on the card for a $1,000 to win event, along with the Chris Frennier Motorsports Strictly Stocks.