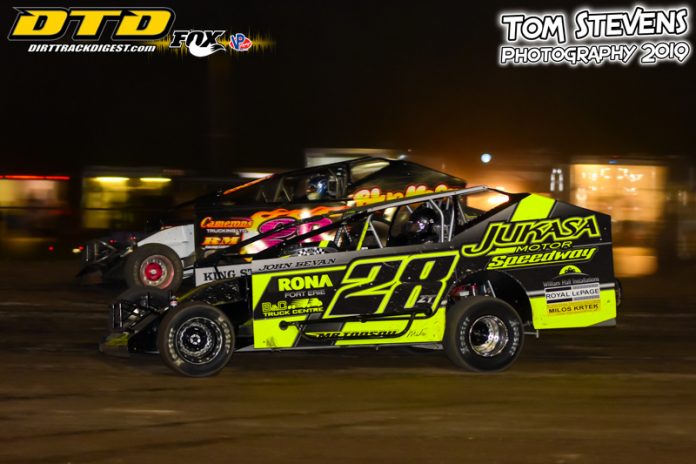 Bill Podwinski and Shayne Pierce brought the S&W Service Centre 358 Modifieds to the green flag for their 35-lap feature with Pierce showing the way. Scott Wood spun in turn four to bring out the races first caution on lap four. On the restart, Mike Bowman looked underneath Podwinski to move into second with Gary Lindberg moving into the top three. Bowman would take the lead on lap nine after Pierce went through the moat. Lindberg, Mat Williamson and Ryan Susice would also get around Pierce to move into the top five. Williamson would move into third on lap 15 after clearing Susice off of turn two. On a lap 18 restart, Bowman would clear for the lead as Lindberg and Williamson battled for second. The top three would pull away from the field as Lindberg started to reel in Bowman and would challenge for the lead. Lindberg would take the lead with five laps remaining as lap traffic became a factor late in the event. Lindberg would hold off Bowman and Williamson to pick up the checkered flag.

Derek VanMil and Robbie Johnston brought the David Chevrolet DIRTcar Sportsman to the green flag for their 25-lap feature with Johnston quickly getting the lead. Paul Gaboury took over second with Cosco, Dylan Davidson and Ryan Ferri racing in the top five. Brad Rouse and James Michael Friesen worked their way through the field as they raced with Jay Mallory and Ferri. Derek VanMil, Brent Begolo, and Brandon Gruhl crashed on the front straightaway to bring out the red flag on lap seven. All drivers did climb out of their cars under their own power with Begolo being able to drive away on his own. On the restart, Johnston would continue to lead with Gaboury, Cosco, and Brad Rouse raced in the top four. Rouse would move into second and then would take the lead away on lap 11. Cosco would move back into the top three as Friesen and Greg Panunte challenged Gaboury at the halfway mark. Rouse would pull away from the rest of the field as Panunte and Cosco both battled Johnston for second place, with Panunte taking away the position with six laps remaining. Rouse would go on to score the win, his second of the season.

Kyle Pelrine and Bryce Richardson were on the front row for the 20-lap Hoosier Stocks feature with Pelrine showing the way with Billy Bleich Jr racing in second. Richardson got high exiting turn four to bring out the races first caution on lap three, giving up the second position. Off the restart, a six-car battle for the lead started to take shape with Pelrine, Rob Murray, Dave Bailey, Billy Bleich Jr, Jason Fontaine, and Rob Disher. Bailey would take the lead just before the halfway mark. Rob Murray and Bleich would battle for second with Murray clearing Bleich with six laps remaining. Murray would close in on Bailey in the late going but Bailey was able to hang on to score the win. Bleich, Fontaine, and Disher would complete the top five.

Garnet Wilson and Cole Hardy were on the front row for the Central Fabricating 4 Cylinders with Hardy taking the lead. Hardy would lead as Tony Kelly would take over second with Jay Moulton, Tyler Lafantaisie, and Austyn Werstroh racing in the top five. After a lap five restart, Hardy and Moulton would battle for the lead with Hardy holding onto the top position. The top two of Hardy and Moulton would pull away from the battle for third place with Lafantaisie, Kyle Haynes, and Tony Kelly racing in the top five. Hardy would hold off Moulton to score the win.


Ryleigh Sliter and Chris Perry were on the front row for the Doidge Building Centre Mod Lites feature with Perry to the lead early on. RJ Pietz would take the lead away on lap two as Perry, Rob Misener, Brent Begolo, and Josh Sliter raced in the top five. Pietz would keep the lead as Begolo and Sliter moved inside the top three to go after race leader Pietz. The top three would pull away from Chris Perry, who was holding off Jeffery May for fourth place. Begolo would take the lead on lap 17, as Sliter took second away on lap 19. Begolo would hold off Sliter by .0019 to score the win.

JJ MacDonald and Tina Ronning shared the front row for the Dave’s Auto and Speed Centre V6 main event with MacDonald showing the way. Tina Ronning raced in second with Barry Blanchard racing in third. Kevin Conley would move into third as the top two pulled away from the field. JJ MacDonald would lead the entire distance to score the win. Conley would finish in second and be followed by Lane, Blanchard, and Ronning.

NEWS AND NOTES: 102 cars signed in pitside for the racing program.

Canada Day July 1, Graybar Electrical and Schneider Electric presents Fireworks! Racing action will feature the Race of Champions Dirt 602 Sportsman Series, the Action Sprint Tour presented by Race Rivalz.com and the Northeast Late Model Alliance for RUSH Crate Late Models presented by Zanchin Truck and Trailer. The Hoosier Stocks will also have their Insta Panels Duel on the Dirt event. A school bus race will end the racing action before a gigantic Fireworks display lights up the sky. Showtime is at 7 pm.

Saturday racing continues on July 6 as Modern Corporation presents a full Bobcat of Hamilton Weekly Racing Series program plus the annual Truckers Show and Shine. Race time is at 7 pm.