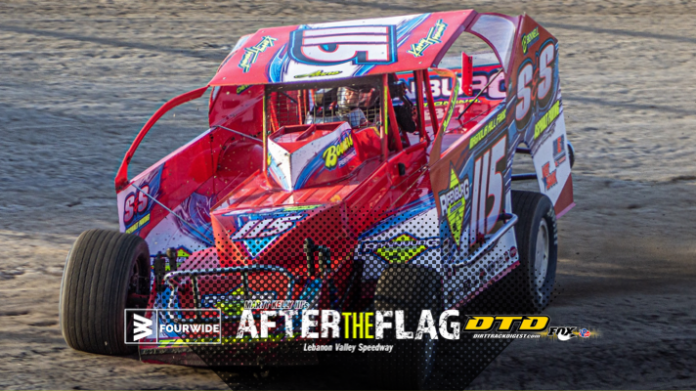 BY MARTY KELLY III / FOURWIDE
Ken Tremont, Jr. of West Sand Lake, New York dominated the 30 lap, $5,000 to win Berkshire Bank modified feature on Saturday, June 29th, 2019 at the high banks of the Lebanon Valley Speedway.
Matt Pupello and Mike King led the 22 car field to green before a boisterous crowd, and the pair ran side by side for the entirety of the first circuit. Further back in the field the Modified Championship points leader Andy Bachetti of Sheffield, MA was battling with LJ Lombardo, the track’s most recent winner when the pair made contact in turn four.
On lap two, the pair got together again in turn one, and consequences were apparent. The caution fell with two laps complete and Lombardo came roaring down pit road. The crew changed a right front tire and relieved body damage from the car and he rejoined the field. Bachetti came in on the hook with a sheared front axle hanging off the #4 car.
Upon the restart, King and Pupello made contact in turn three bringing out the yellow again, still with two laps in.  The next restart saw King slow, and Brian Berger hammered out to the lead.  Berger’s advantage was short lived as Tremont quickly slid up in front in turn four. From there it was no contest, Tremont lapped through 10th position and took home the win. Berger finished second and JR Heffner was third with Kolby Schroder and Eddie Marshall rounding out the Top 5.
“We were a little free, after hot laps the sun was still out and I said we could probably tighten it up some more, but we thought the bite would come back for the feature and it did,” said Tremont as he celebrated the win at the hauler with friends and supporters.
Brian Berger was plenty happy with his podium run.
“That shouldn’t be allowed,” joked a smiling Berger after the race. “We’ve had a great week.” he noted, referencing his first career Albany Saratoga speedway top ten, and his solid run in Brett Hearn’s Big show back on June 25th.
Back in the pits, Bachetti and Lombardo went at it once more as the crews and drivers exchanged words and gestures.
In Small Block action, Andy Bachetti bounced back from a wild crash last week for the win, a three wide move around the outside of Chris Curtis and Steve Hough to take the lead.  The car he ran, a 2014 Teo, was said to be even better than the newer piece he wrecked the week before, and it was believable. he won by a straightaway over Curtis and Hough. It was Bachetti’s sixth small block win of 2019 and his 34th of his career, passing Kenny Tremont as the all time wins leader for the division.
Mike Sabia started 18th and drove to win the sportsman feature.
“I only keep my hat in the car if I think we have a shot to win,” said Sabia, standing by his car in tech wearing his hat.   “We’ve gone from 26th to third here before so there was no doubt if the car was good we would have a shot.” Ryan McCartney, the 13 year old chauffeur of Pawling finished second and Pete Carlotto was third.
Tom Dean staved off challenges from Jason and Jay Casey among others to earn his first career pro stock win in four years of trying. Dean started on the front row and led all 20 circuits.
Pure stock races were won firstly by Jeff Meltz, Sr, and Chris Murphy.  The Meltz Lumber pure stock classic was taken by Jeff Kreutzinger, his fourth win of the year. He pass Ed Hatch to do so.
The Lebanon Valley Speedway is back in action this Saturday, July sixth for another exciting night of racing, featuring the VP Race Fuels Sportsman Summer Shootout Series along with a full racing card. See you at the races!