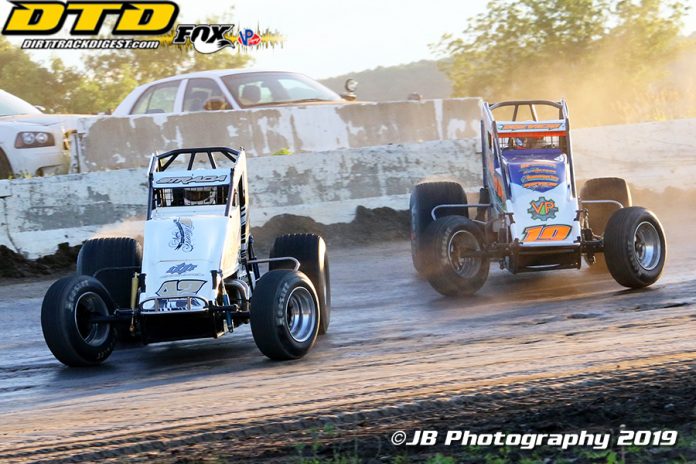 FULTONVILLE, NY – “The Edge” Eddie Strada from Lake Ariel, PA was able to grab his first Rapid Tire, USAC East Coast Sprint Car Series victory of the year after re-passing and holding off Steven Drevicki to take the checkers.

Strada would start his night off on the right foot after pulling the number one pill for the nights action and placing him on the pole of heat one. Strada would go on to win heat race number one by a comfortable margin over Thomas Radivoy. The top three drivers from each of the heat races would redraw for the top six positions, which would put Strada and Bill Unglert on the front row for the feature event.

Strada would quickly jump out to the early lead on the initial drop of the green flag, with Steven Drevicki moving into second from his third place starting spot. Drevicki would close in on Strada early on and take the lead from Strada on the backstretch and lead on lap six. Drevicki grabbed the lead of the field running the middle groove of the track with Strada not far behind. Strada would masterfully work the bottom groove to get back underneath Drevicki to take the lead back on lap thirteen.

The caution would fly on lap 14 as Chad Miller would spin in turns three and four and leave no place for Eric Jennings to go. Jennings would make contact with the Miller machine in the left side nerf bar, leaving both cars with no major mechanical issues. Both drivers would rejoin the back of the field.

The ensuing restart would see Strada leading over: Drevicki, Unglert, Buckwalter, Radivoy, and Chandler Leiby. As the field went back to green Buckwalter would quickly move underneath of Unglert to take the third spot away and try to hunt down the top two drivers.

The field would settle in for the next handful of laps before the caution would fly on lap 18 for Eric Jennings who would go for a spin in turn two. As the field took the green on the next restart, Chandler Leiby would utilize the bunched-up field to get by Unglert and move into the fourth-place spot. The caution flag would again fly on lap 22 for a spinning Thomas Radivoy machine in turns one and two. While the caution was coming out, Bill Unglert caught a tire on the back stretch and went for a tumble ending his feature event. The caution would set up a three-lap dash for the victory.

Strada would be able to hold off Drevick, Buckwalter and the rest of the field to collect his second career Rapid Tire, USAC East Coast Sprint Car Series victory, and his first on the 2019 tour. Strada has been consistent all season long, just like last season, and currently sits third in the points standings.

The night was off to a tough start for two drivers as Chris Allen and John Anderika would make hard contact in their hot lap session. Allen would suffer enough damage to force him to miss his heat race but would rebound in the feature to collect the Scotty Signs, KSE Racing Products, Vahlco Wheels hard charger award. Anderika would suffer significant damage, including a broken frame and would be done for the remainder of the evening.

As a side note, Sunday was the sixth wedding anniversary for our race director Matt Chambers and his wife Tammie, who is also an official with the USAC East Coast Sprint Car Series. Most fans don’t see or interact with Tammie as she works so very hard behind the scenes in the pit area to ensure the night goes smoothly. So, a very happy anniversary to Matt and Tammie and here’s to many more!!

Up next for the Rapid Tire, USAC East Coast Sprint Car Series is the second ever trip to the New Egypt Speedway on July 6th.