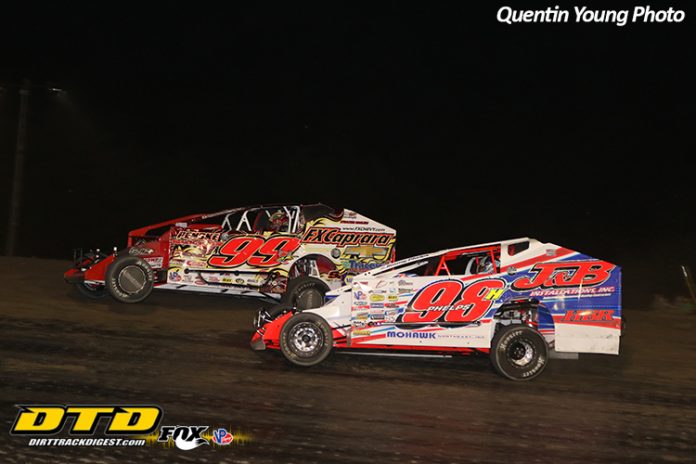 Dorothy in the Wizard of Oz repeated the statement “there’s no place like home.”

The Plattsburgh Airborne Speedway isn’t home for Larry Wight. It’s nearly five hours from his Central New York shop, but maybe it should be.

In two visits to the speedway, Wight has won both Super DIRTcar Series Border Battle 100’s he’s entered in dominating fashion. On Monday he worked from eighth before passing Matt Sheppard for the win, $10,000 and a guaranteed starting spot in the Billy Whittaker Car’s 200 at Oswego Speedway.

“The first half of that race I thought we were a top five car at best,” mentioned Wight. “Then we had that caution and the car just fired awesome off the bottom. We were able to get Jimmy (Phelps) quick and we could kind of run with Sheppard. Someone caught the tire right in the middle of three and four and that really screwed up Matt’s line. He couldn’t get off of four. We were able to take advantage of it without him knowing.”


It was Wight’s second win in a big-block in 2019 with his last coming at Volusia Speedway Park as part of the DIRTcar Nationals.

The only scare for Wight on this night was in the closing laps in traffic. Multiple cars were battling for position giving Wight a little bit of trouble as he tried work his way through.

“The 01 (Chris Raabe) couldn’t figure out what line he wanted to run,” cited Wight. “It seemed to be if I got a run underneath him he cut me off. If I got a run on the top he’d slide up. Finally, I was able to cross him and get enough alongside of him that I could slide him. It was enough to hold on.”

Matt Sheppard is not one to sit on his accomplishments. The Waterloo, N.Y., driver is always looking to get better. He won the race at Cornwall Motor Speedway before finishing second to Wight at Plattsburgh on Monday. He indicated the team is continuing to try and get better.

“People don’t realize how much we are still experimenting,” mentioned Sheppard. “Last night and tonight, we again had in two setup combinations that we’ve never run before. To come out with a first and second, I’m happy. We are still learning every night.”

Sheppard was good until about midway through the feature after a tire on the inside of the speedway was clipped and moved out into his groove. That changed what he was able to do on the bottom of the track in turns three and four. He wasn’t nearly as good on the top.

“I thought I had a really good car on the bottom of three and four, but about halfway through the race someone clipped the tire and moved it out onto the track,” cited Sheppard. “It kind of took my line away. I just wasn’t good enough on the top down there. We had a pretty good car so I can’t complain.

“I couldn’t carry the speed on the top three of four that Larry could. I felt like I could run with him in turns one and two, but in three and four he could carry better speed.”

Phelps In the Mix

Jimmy Phelps ended up finishing in the fourth position when the final checkered flag fell. Phelps started in sixth and ran as high as second before losing spots to Wight and eventual third place finisher Danny Johnson.

“I needed to commit to the top of three and four a little harder after that restart,” commented Phelps. “The bottom was working for me in three and four. We lost a couple spots there. I felt like we were on par with (Billy) Decker. Sheppard was a little better. We had a fourth-place car. With the way our night started I’ll take it.”

Like Sheppard, Phelps had trouble after the tire on the inside of the track was kicked out onto the speedway.

“I was behind (Jack) Lehner when he hit it,” stated Phelps. “We were making some ground on that inner lip. I think we both (Sheppard) tried shoving it back down but missed it every time. The last couple times we’ve been here it was bottom dominant toward the end of the features. Tonight, you just ran the lip all the way around which I’m not exceptional at anymore. We’ll take it and move on to Canandaigua.”

Danny Johnson finished third in the final rundown. The Rochester, N.Y., driver indicated that he had set the car up to run the bottom. They missed it a little bit, but he was happy to be on the podium…

Stewart Friesen retired from the feature early. Friesen plugged the rear tire full of mud causing a serious vibration on his No. 44. He pitted multiple times but the team still had a vibration…

Jessey Mueller had a bad night. Mueller missed his time trial lap causing him to start last in his heat. Before he made it to the start finish line in the heat, Mueller slammed the wall cracking the rear axle tube…

Mike Mahaney had to go a second car after blowing a hose on the power steering. The new hose went bad causing the team to go to a backup ride a second time. In the feature that car broke a rear axle. The only positive news on the night is that Mahaney received a free Hoosier Tire for redrawing the 12th starting position…

Peter Britten and Erick Rudolph go tangled together a couple times on the night. At the start of the heat race the pair raced hard for the lead going into turn one. It ended with Rudolph going over the top of the speedway. He fell back to sixth.

Lance Willix had his time disallowed in time trials for not going to the scales. He was third quick in his group. He did not compete the rest of the night…

Britten, Sheppard and Hearn won the heat races while Steve Bernier earned the win in the Last Chance Shodown…