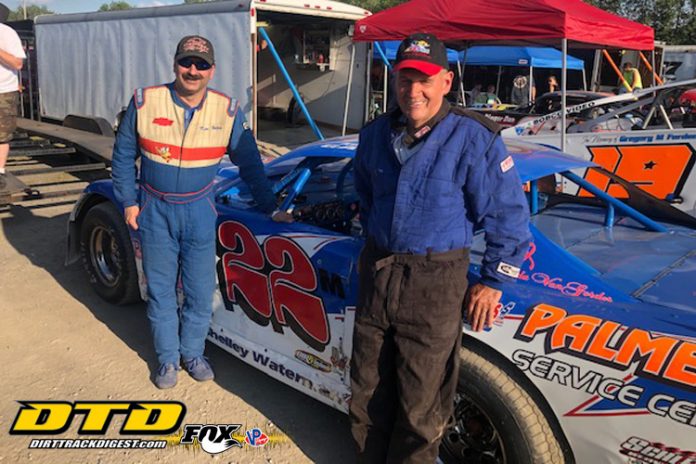 Brett Hearn’s Big Show 11 proved once again that he and his team can put on a big show, one that was full of special happenings and concluded with one special 111 lap Modified race featuring some of the best in the business all vying for the top prize of $11,111. The main event came down to a last lap pass by a hard charging Stewart Friesen to take the lead from the show’s promoter, Brett Hearn. Friesen was behind the wheel of a newly prepared DKM Chassis No. 44 powered by a Billy the Kid engine.

On hand in the pit area and/or competing at the big show were nine former Syracuse /Oswego winners. At the track, selling his book, Gary Balough was in victory lane and said, about the race, “This is what happens when you have two of the best drivers competing for the win.”

Vic Coffey was crewing for his son Kyle and Hearn, Friesen, Billy Decker, Kenny Tremont, Danny Johnson, Larry Wight, and Matt Sheppard were all in competition. Among the nine there is a total of 27 Super DIRT Week wins in the 47 times it’s been run. The, winner take all, non-qualifiers race paid $750 or a spot in the feature and unlike what usually happens, winner, Andrew Ferguson, took the money. Andrew said, “Until tonight I had never seen this track and to get that kind of money I would have to finish at lease 12th in the feature so I thought it was best for me to take the money and watch the race.” Andrew is a regular at Brewerton.


Friday it was back to Albany Saratoga for a special night honoring those who have paid the ultimate price serving our country. The Patriot Guard Riders were on hand to participate in the ceremony, Ally Crowley-Duncan played the bagpipes and sang the National Anthem. Ally and her parents, Justine and Jimmy Duncan are a big part of the evening and to cap it off for them, Jim won the Street Stock feature. Jim also honors those who have paid the ultimate price by painting their names on the hood of his car. We thank Albany Saratoga, the Duncans and the Patriot Guard Riders for their dedication in honoring our fallen veterans. The $5 admission and two special events along with regular racing brought out a huge crowd at Fonda on Saturday night and it’s safe to say they were not disappointed. In the past few weeks we’ve seen many race fans return to Fonda and on Saturday we found one young lady that was at Fonda for the first time with her sister, Kathy who is a long time fan. Janice said her sister had been trying to get her to Fonda for a long time. They were enjoying the Bill Ag Memorial Elimination race when we spoke to them and Janice said she was loving the excitement. It’s always great to see new fans in the stands. Although we normally don’t like to highlight crashes and wrecks we thought that Mike Jackson’s crash on Saturday night and his remarks in the pits at the end of the night was something that should be. We shot this photo of Mike Jackson and his new Bicknell No. 21H Sportsman sitting outside the Fonda Museum before the nights action. Little did we know then that Mike would be taking the ride of a lifetime during his qualifying heat. By now you’ve probably seen the shots from the photographers. All that witnessed Mike’s terrible crash sat silently waiting for the word on the driver’s condition and thankfully he was okay. We spoke with him after the nights racing and although he said he was sore, he said he would be letting the folks at Bicknell know how happy he was with how well the roll cage held up. Racing and safety have certainly progressed since the early days of racing and all the chassis builders are to be commended for the job they do in building the cars. Saturday we met Joseph “Frenchie” Daigle in the Fonda Museum and he had an interesting Kenny Shoemaker tidbit to share. If you’ve read the Fonda book or followed Fonda’s history, you know the story of how Kenny Shoemaker had many of his trophies put in the wall of a room he was building in his attic. Well, Frenchie was the dry wall expert that put up the drywall and did the work for Shoemaker. Frenchie also worked with Kenny on his pit crew. He’s been coming to Fonda since 1956 and although his missed some nights he’s never missed coming at least once each year.

For many of the Fonda Faithful there was a very familiar Pro Stock in the Hondo Classic on Saturday, a blast from the past, Danny Ballard in the No. 22M. Kenny Gates and crew had surprised Danny with the car and Danny said, “I even got a little choked up when I saw it.” Kenny Gates says he probably doesn’t have many years left in racing and he has a lot of people he wants to thank from his years in the sport and Danny Ballard was just one of them. Gates began racing Pro Stocks in 1992 and Ballard said he was last behind the wheel of a Pro Stock in 1994 and its 10 years since he’s been on the track at Fonda. Gates joked that if they were both going for the checker at the end of the race, Danny had to let him win, it’s a team rule. And if Danny won, he would pay his pit admission next week. At Glen Ridge on Sunday we met one of the rising stars in the JR. Slingshot division. Adrianna DeRocher of Rotterdam, drives the No. 7A and has been racing Slingshots the past two years and has one victory under her belt. Adrianna is 14 years old and will enter the 10th grade this fall. We will be at Fonda, July 3 for the Firecracker 50 paying $10,000 to win. It’s the first ever Short Track Super Series (STSS) event to run at the track. Along with the Modified event is a $2,000 to win STSS Crate 602 Sportsman Series event. There is $5,000 in lap money that is also being paid out in the Modified main event with a total cash prize purse of $39,200 including special awards, contingencies and heat money, $1000 for 10th place finish, $400 to take the green. The 50-lap event will be recorded by MAVTV for viewing in September. John Lakata has created a special trophy for this historic event.