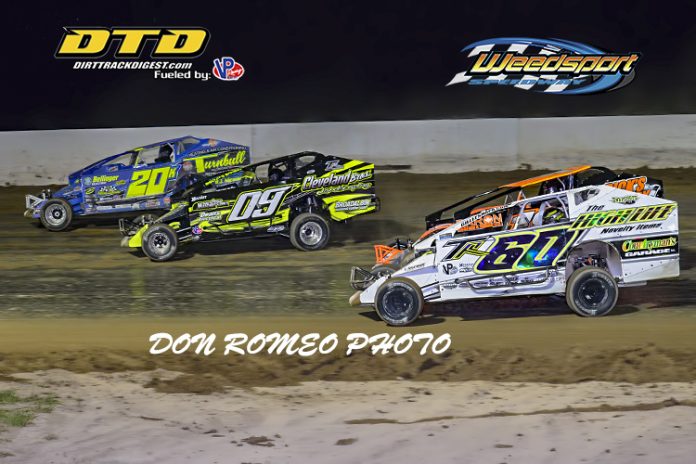 WEEDSPORT, NY – Prior to Tuesday evening, Jackson Gill had never won a Sportsman main event at Weedsport Speedway.  That all changed last night, in a big way, as Gill bested a veteran lineup of Central Region Sportsman competitors to claim the top prize of $2,500 in the 6th annual Sportsman Classic presented by Stirling Lubricants and Champion Racing Oil.

After winning his qualifying heat race, Gill redrew the 11th starting position for the 75-lap crown jewel and then methodically worked his way through the pack to eventually steal the lead from Connor Cleveland and Kevin Root on lap 52.

Once out front, it was anything but a cake walk for Gill, who would touch the inside jersey barrier with 10-laps to go, forcing the pilot of the No. 60 to carry a flat left front tire the rest of the way home to victory.

“I don’t have the words for it,” said Gill on Victory Hill.  “I thought we threw it away with the flat left front there at the end.  I just got too close to the jersey barrier and I hit it.  When we got the lead those guys were running the bottom, so I got a good run on the high side and I had to use it.  Then I was able to get back to the bottom and use that the rest of the way.  Winning with a flat left front, I don’t think it can get better than that.”

For the second year in a row, Cleveland claimed the runner-up spot in the Classic with Root, Kyle Inman and Brad Rouse in the top five spots.  Completing the top ten were Jessica Power, Mark Yorker, James Spano, Kane Bristol and Matt Janczuk.


By virtue of the redraw, Root and Rouse started the 75-lap Sportsman Classic from the front row with Rouse gaining the early advantage in the No. 18.

However, a quickie caution on lap 1 for Robbie Johnston forced a restart.  On the restart, Root took the advantage in the No. 34 and hurried off into the race lead with Rouse, Cleveland and Power in tow.

Just like last year, Cleveland was once again a contender in the No. 09, finding the runner-up position by Rouse in the early going.  Before long, Cleveland emerged as a threat to Root out front.

The Janczuk No. 33X was making the right moves early on, working into the third position, from the tenth starting spot, before a flat left front tire ended his progress.  Janczuk would bring out the caution on lap 23, slowing the field.

When the lights went green Inman appeared to be the new threat for the lead, taking it 4-wide to the outside of the speedway to claim the runner-up position behind Root.

But, Cleveland would once again find his rhythm, driving back by Inman to join Root in a runaway out front.

As the laps began to tick away it certainly appeared as though Root and Cleveland would settle the Classic on their own terms out front as the cross-flags at lap 38 saw Root and Cleveland now leading a hard charging Gill, Inman and Rouse.

However, lapped traffic began to emerge at around lap 44, allowing Gill to make it a three car battle for $2,500.

By this time, there was no doubt that Gill was the fastest car on the speedway, but he needed a way by.

Gill would make that way on lap 52, first rolling around the outside of Cleveland into turn three, then pulling the over/under, diving below Root for the top spot out of turn four to take the lead.

From there, Gill immediately began to pull away.  That was until he grazed the inside jersey barrier with around 10 laps to go, causing a flat left front on the No. 60.

During this time, Cleveland had managed to take the second position from Root and could see the flat on Gill in the lead.  In the waning laps, Cleveland did all he could to try and steal the lead, giving one last high side effort out of turn four, but would fall short as Gill laid claim to his first career win at Weedsport.

The next DIRTcar Sportsman event to take place at Weedsport Speedway will be on Sunday, July 28 alongside the Super DIRTcar Series Hall of Fame 100.  Details are posted to the events page on www.weedsportspeedway.com.

The RUSH Late Model Series joined the Sportsman on Tuesday for a $2,000 to win event, with 31 cars looking for a starting spot.

At the end of 30-laps it was Max Blair driving to the $2,000 victory over last year’s winner, John Waters.