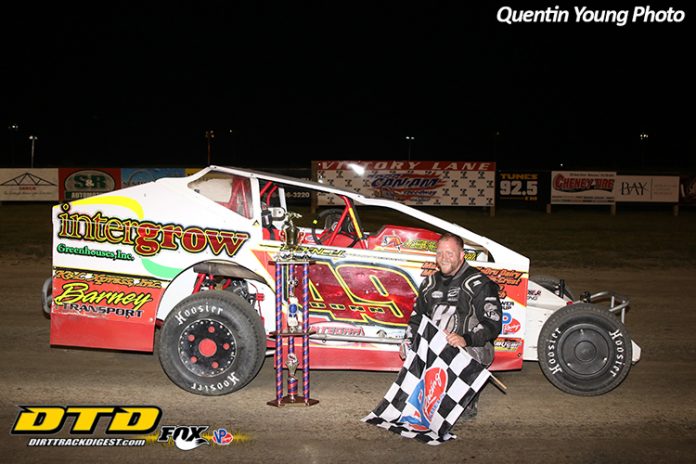 LAFARGEVILLE, NY –  Lance Willix led the opening laps of the 35-lap Small Block Modified main, but all eyes were on Tim Fuller, as Fuller went from sixth to second in the opening lap and a half. It took a few more laps for Fuller to pass the final car in line, Willix, but a strong run off the cushion gave Fuller the speed he needed to grab the lead on lap four. A yellow two laps later and subsequent restart allowed Billy Dunn to get to second, and Dunn spent the next stage of the race stalking Fuller.

Another yellow waived on lap 14, allowing Dunn to line up alongside Fuller. Dunn had a traditional 358 under his hood, while Fuller had a W16. While Fuller had less weight and equal speed once momentum was built up, Dunn could fire off better with his engine. The result was Dunn beating Fuller into turn one on the restart, rolling the top, and getting by Fuller for the lead. From there, Dunn went on cruise control.

One final yellow for a stopped car and oil halted Dunn’s charge with ten laps to go. On this restart, Fuller lost second to Ryan Arbuthnot, but Fuller wasn’t going down easy. On lap 30, Fuller got a run up top and slid back into second, but the battle between Fuller and Arbuthnot allowed Dunn to build a healthy lead. When the checkered flag fell, it was Billy Dunn winning over Tim Fuller, Ryan Arbuthnot, Bobby Herrington, and Jordan McCreadie.

“This is win 49 here but it ranks up there at the top,” Dunn said. “Every great driver that’s ever raced here has won this race. I got to move around when I was in second, and his W16 wouldn’t fire as good off the restarts and that was my best chance to roll him for a lap. I knew if I got out front and didn’t screw up I could hold him off.”


For the majority of the DIRTcar Sportsman Series feature, Kyle Inman had a small but steady lead over Kevin Root. The two seemed to be comfortable, working through traffic easily. With 28 of the 30 laps completed, Inman was on his way to a win, but a spin in the back of the field drew the caution and everything changed.

Root got a good restart and stayed even with Inman through the first set of turns and down the backstretch. Entering turn three, Inman shot a slider, and Root dropped the nose and drove back under. Root cleared Inman coming to the white flag, but lost some grip in turns one and two. This allowed Inman to pull high and draw even with Root with half a lap to go, but enter Connor Cleveland, who had quietly worked to third. As Inman went high, Cleveland went low and stuck a nose out into the lead. Entering the final set of turns, Cleveland shot a slider on Root, who slid Inman at the same time. Root crossed over Cleveland, and Inman crossed under Root. The trio drag raced out of turn four, three wide across the finish line. Kevin Root got there first and took the win, with Inman second and Cleveland third, just a half car length behind.

Given the battle that may go down as the finish of the year in New York, Root said it best. “If you didn’t enjoy that, I don’t know what the hell you’re doing here.”