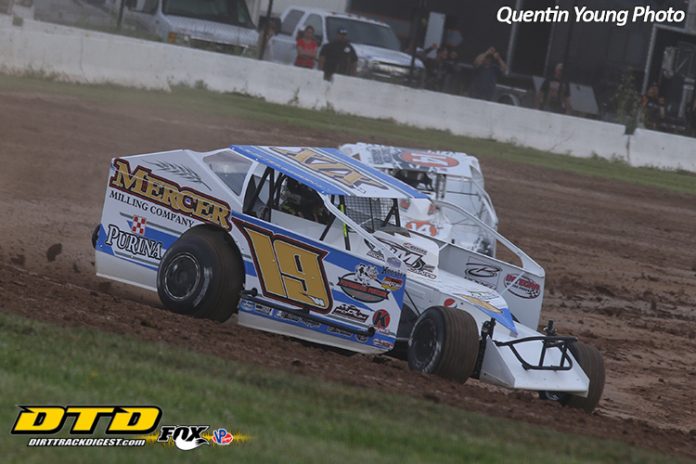 Justin Wright is one of the little guys in racing. He doesn’t race for a living, rather he does it simply because of his love of being behind the wheel.

On Thursday night he scored one for all the little guys out there. Wright hung with the big names at the front of the field for the entirety of Super DIRTcar Series Liberty 100 at the Land of Legends Raceway. The York, N.Y., driver ended the night somewhere he never expected, on the podium behind Matt Sheppard and Billy Dunn.

“I should probably retire,” joked Wright. “This is a dream come true. I never though that this would happen. I was struggling out there to put the Hoosier band on. I see everyone on tv and in pictures do it. I don’t know. I’m star struck still. This makes my life, honest to God. There are two dozen guys just like me that I wish they could experience it. It’s a tough deal to beat these guys.”

Wright made the redraw via a strong performance in his heat race event. He pulled the number two for the start of the 100-lap race. He started outside of Max McLaughlin and hung right with him. At time he even faced pressure from behind, but didn’t bother him as he stayed focused on McLaughin. He was able to challenge for the lead on a couple of occasions.


“Max fired off better than we did, but I thought I was kind of catching him there in lapped traffic,” explained Wright. “To me it was evident my inexperience in a 100-lap race. I was trying to figure out where to get between him and a lapped car to get next to him and race him some. We got really close and the caution came out. Then it was just a learning experience of not sealing the tires up. Usually we pull off because we are so bad and we don’t want to lap the motor up and stuff.”

Wright didn’t fire as well restarts as he would have liked at times. He hung in the top five for most of the first half of the race before dropping nearly out of the top 10 by lap 75. He also admitted that he wasn’t expecting to be running where he was and at times he found himself in awe of his position.

“I couldn’t get the tires to fire off,” cited Wright. “We might have had the best car, but the most inexperienced driver as far as firing tires. Then just racing with guys I grew up idolizing and it happened a little bit on that restart. I was racing with the Doc (Danny Johnson). I had to tell myself that I wasn’t watching on tv, you got to get going or you are going to be 12th.”

Luckily, he figured out the restarts at the right time and got his composure as he definitely got going on the final green flag of the race on lap 99. He refired in the fifth spot before driving by both Jimmy Phelps and Peter Britten to move into third. That was where he would end up.

“I don’t know how these Hoosiers work,” commented Wright. “Sometimes they’ll fire off and sometimes they’ll cycle back through. I don’t know if the roulette wheel landed on us and theirs didn’t, but we felt pretty scotched up on that restart. Maybe they didn’t fire off because they went to the bottom to protect and we were stuck there in the middle. It stuck better there that last time. Who knows what could have happened if we didn’t seal a tire up every time? It was all a learning experience; slicing and dicing with them guys at the end. That was a dream come true.”

Making the moment even more special was how much support he received from so many others in the pit area. As he stood shocked in victory lane Matt Sheppard’s crew surrounded him with many others offering congratulations.

“To be out there in the top three, Sheppard was more wound up for me than as I was,” stated Wright. “His crew guys were happy for me. They surrounded me for running third. They weren’t even paying attention to him and he won. That just says a lot about the good group of guys that I’ve been around and let me tag along and learn. I ask questions and they are honest with me. Usually when they are lapping me, I stay out the way. They are doing this for a living. We are just doing it for fun.”

On this night, Wright certainly had more fun than he’s had on any other night of his career.