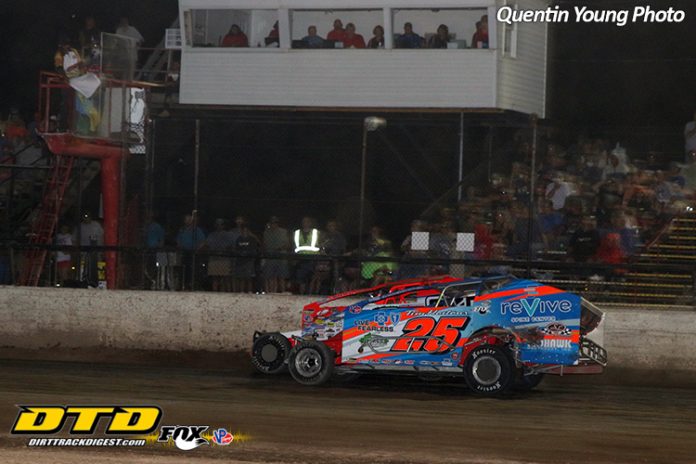 Unfortunately, neither Max McLaughlin nor Erick Rudolph got the result they wanted on Thursday night at the Land of Legends Raceway in the Super DIRTcar Series Liberty 100.

McLaughlin started from the pole position before leading all but one lap of the main-event. A late challenge in traffic for McLaughlin gave Rudolph an opportunity to steal the victory from his grasp. The pair raced hard through turns one and two with Rudolph gaining an advantage on the backstretch on final lap.

From there things went drastically wrong for both drivers. As they entered into the third turn heavy contact was made between the pair. McLaughlin tried to get under Rudolph, but when the two came together it sent both drivers spinning to the top of the speedway.

“There was lapped traffic,” stated McLaughlin. “We were all battling and racing hard. He got into me in one and used me up off of two. I got under him. I entered hard and tried to get it back. I by no means wanted to wreck him. I made a mistake and drove in too hard and that was it.

“I tried to return the favor for the win. I got seven races in this car this year. I don’t know what’s after that. I only get seven races so I’m not running for points or racing to finish second. I’m racing to win. I’ve ran second plenty of times on the series. I did what I thought I had to do to win. I feel bad and I’m sorry for that. I didn’t mean to wreck him by any means.”

As for why he made the move in turns three and four to get inside Rudolph, McLaughlin believed there was an opening where he could make a move to snag back the lead and his first Super DIRTcar Series triumph. He admitted that it was a mistake.

“He got tight in between those two lapped cars,” cited McLaughlin. “He slid up the track so I tried to fill the hole. I entered way too hard and couldn’t get whoaed up. If I wouldn’t have got tight getting into three I would have squared up and hit him with my nerf bar. I got tight and ended up hitting him with the tire and drove over his nose. If I had another three inches and hit him with the nerf bar it would have been a different story. I made a mistake.”

Rudolph was obviously dejected after losing a chance at a $7,500 payday. He felt like the contact in one and two on the final lap was just racing for a win. He never expected the heavy contact that cost them both the race.

“I got into one and we had a couple of lapped cars in front of us,” commented Rudolph. “I got underneath him coming down the front straightaway. Through one and two we touched nerf bar to nerf bar, no big deal, last lap stuff. I don’t know what happened. I had the lead going into three. There was nothing to the left or right of me. It seemed like he held it to the floor and wiped us out.

“We were running first and second. We had the best cars. The way it worked out; I was going to win. I read lapped traffic a little better. He wasn’t going to let that happen I guess.”

When it was all over McLaughlin headed pit-side and finished 21st while Rudolph soldiered on to finish in the 18th spot. It was not the finish either of them had hoped for. The win eventually went to Matt Sheppard.