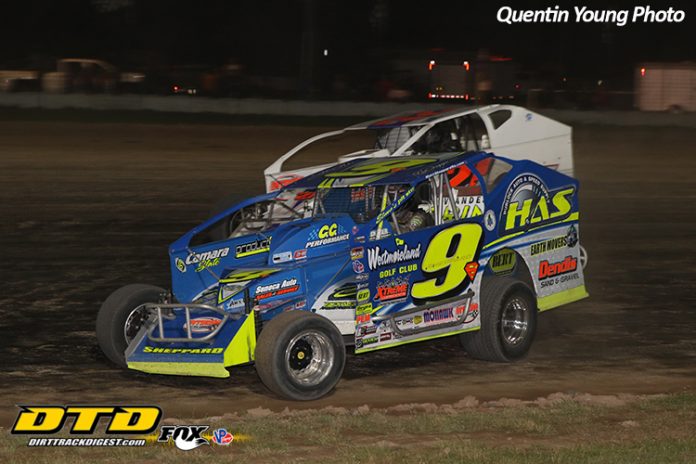 CANANDAIGUA, NY – Matt Sheppard was at the right place at the right time at Land of Legends Raceway, as when the top two cars tangled on the last lap of the Super DIRTcar Series 100-lap race, it was Sheppard sneaking by and taking the win.

“When Dunn and Britten got tangled up, it allowed me to sneak in there for third,” Sheppard said. “With a couple laps to go I was like ‘alright, third is pretty good’ and I was fine there, but on the last lap I drove into three and both the leaders were backwards. I’ll take it.”

Max McLaughlin showed the way early in the Liberty 100, with track regulars Justin Wright and Billy Dunn in tow. The front of the field remained rather quiet in the opening stages, with the biggest mover being Matt Sheppard. Sheppard started eleventh and cracked the top five on lap 15, but slipped back a couple spots over the rest of the run, bouncing around between fifth and seventh much of the event. With 30 laps down, the top three still remained close, with McLaughlin about a second and a half in front of Wright, and Dunn right on his tail.

A caution for Rob Bellinger breaking and subsequent restart allowed Dunn to slip by Wright for second, while Peter Britten held down fourth for the moment. This was just for the moment, as Erick Rudolph had quietly worked into the top five, then past Britten, then Wright, and closing in on Dunn just after halfway. After a number of laps of working over Dunn, Rudolph was able to complete the pass on lap 69. When the pass was made, McLaughlin’s lead was around ten car lengths.


After getting to second, Rudolph wasted little time chasing down McLaughlin. In the span of five laps, the gap shrunk from ten to two car lengths, but a spin by Rusty Smith on lap 74 stopped the battle for a moment. Rudolph stayed within striking distance of McLaughlin until another yellow on lap 83 bunched the field up one last time.

On this restart, third place Dunn and fourth place Britten got tangled up, and Sheppard tossed it below both of them to go from fifth to third in one shot. Jimmy Phelps was starting to make noise, now in this cluster battling for a top five after starting 20th. Up front, Rudolph slowly inched in on McLaughlin, getting a little closer with every passing lap.

After many laps of lurking, stalking, and trying to find a way by, Rudolph got a run off the bottom of turn four and pulled even with McLaughlin as they took the white flag. By this point, the preferred lane in turns one and two was right in the middle of the track, and that’s where both drivers headed. At this same time, lapped cars were door to door in front of them, taking away some lane choices for either leader.

Rudolph and McLaughlin remained side-by-side down the backstretch, with Rudolph still low and McLaughlin high. Rudolph planned to run the middle of three and four, hopefully splitting the lapped cars, but McLaughlin got out of the gas entering three and turned under Rudolph. After a brief stomp of the throttle, McLaughlin ended up in the door of Rudolph, and the hit sent both drivers spinning.

The yellow with a quarter of a lap to go set up a green-white-checkered finish with Sheppard leading Dunn. After two relatively uneventful laps, it was Sheppard winning his third Super DIRTcar Series race of the season.

Dunn grabbed second at the checkered.  He wasn’t good on the short runs which hurt his chances of getting by Sheppard in the final few laps.

“It was a challenging track,” Dunn said. “I would have five or 10 laps where I would feel like I was just as good as anybody in front of me.  Then I struggled on the restarts until I put some heat in the tires.”

Wright had the best run of his career in a Super DIRTcar Series event finishing third.

“I am at a loss for words,” Wright said. “Usually in 100-lappers we don’t do very well. We pull off and get out of the way. If you had told me this morning that I would be in third place tonight … I had the best car in the top five, but probably the worst driver. We’re figuring it out.”