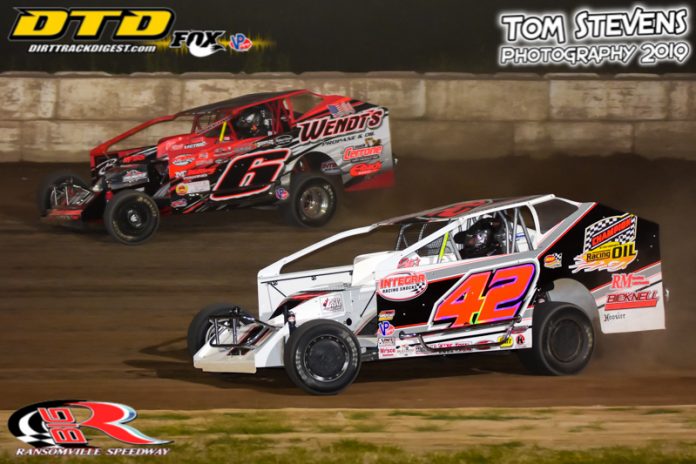 RANSOMVILLE, NY – Mat Williamson of St. Catharines, Ontario scored his first Krown Undercoating 358 Modified win of the season on Friday night at Ransomville Speedway on Regional Haulage night at the races. Williamson passed Pete Bicknell for the lead on lap 7 of the 30-lap feature, and never looked back.

In other action, Derek Wagner of Middleport, N.Y. held off defending track champion Brett Senek to win the Investors Service feature. Pete Stefanski of Wheatfield, N.Y. won his second Ki-Po Chevrolet Street Stock feature of 2019. Dante Mancuso of Batavia won his second race at the “Big R” in the Ransomville/Genesee Mini Stock series for the Gippster’s Collision Mini Stocks. Bubby Pawlak of Burt, N.Y. won for the second week in a row in the Stevenson’s Hardware Novice Sportsman.

The 30-lap Krown Undercoating Modified feature ran off with just one caution flag. The one slowdown happened just after the completion of the first lap when last week’s winner Mike Bowman tangled with Allan Wills on the frontstretch. Wills’s suffered terminal front end damage, and was unable to continue.

The ensuing 29 laps went caution free with the race restarting with Pete Bicknell leading Jeff McGinnis, James Sweeting, Williamson and Gary Lindberg. Williamson quickly picked off Sweeting and McGinnis when the race restarted to move into second place by lap 5.

Williamson then turned his attention to Bicknell for the lead. Bicknell was riding the inside line while Willamson took to the outside. He drove around the outside of Bicknell to take the lead on lap 7. The race took a torrid pace with no cautions and dry and slick track conditions. Williamson drove away to a large lead, and caught lapped traffic with about 10 laps to go.

Defending track champion and current points leader, Erick Rudolph, started 11th, and he put on a show as he drove through the field. Rudolph entered the top five for the first time on lap 9. He passed Sweeting for fourth two laps later, and then took third from McGinnis at the halfway point of the event.

Not even lapped traffic could slow down Mat Williamson. The CW Racing Wendt’s Propane #6 looked dominant as it rolled through the back half of the field in the closing laps. Williamson cruised to his first win at Ransomville since May 18, 2012.

Rudolph caught Bicknell late in the race, but couldn’t get close enough to overtake him for second. Bicknell held on to finish second with Rudolph in third. James Sweeting finished fourth for his second-straight top five finish. Chad Brachmann rounded out the top five.

In the Investors Service Sportsman, Kyle Inman started on the pole in the borrowed Bellinger Electric #7 normally driven by Brian Bellinger. Inman shared the front row for the 25-lap feature with Robbie Johnston.

Derek Wagner took off from the sixth starting position. He took over second place from Johnston just before the caution flag came out on lap 7 for a multi-car incident. Several cars stacked up in turn four, including Darrell Borkenhagen, Brett Martin, Jessica Kriegisch and Scott Just.

The race restarted with Inman and Wagner on the front row, and Wagner launched himself into the lead. He then quickly pulled away from the lead as the race went on a long green flag run.

Sportsman points leader Brett Senek started 12th by virtue of qualifying for the redraw after winning the previous week’s feature. By rule he had to start last out of the cars that qualified for the redraw. Just like Rudolph in the Modified feature, Senek had to pass a number of cars to get to the front of the field. He joined the top five on lap 8 as Wagner took the lead. He eventually landed in fourth place where it looked like his progress would be stalled. The long green flag run had stretched out the leaders, and Senek would likely be unable to catch the top three without a caution.

Things turned Senek’s way on lap 19 when Noah Walker brought out the caution. This bunched up the field for one final double file restart. Senek slid by Inman and Johnston on the restart to move into second place with five laps to go. A final caution on lap 22 set up a single file restart to decide the race between Wagner and Senek.

Wagner got a great jump on the final restart of the race. He opened up a couple car length advantage on Senek, which turned out to be just enough. Wagner raced under the checkered flag with Senek in his tire tracks. It was the second week in a row that the pair finished first and second as Senek beat Wagner the week prior.

Inman settled for third place for his second top five run at Ransomville this season. Garrison Krentz and Robbie Johnston rounded out the top five.

Pat Dell and Anthony Guthrie led the Ki-Po Chevrolet Street Stock feature to green. Guthrie grabbed the lead on the opening lap with Jaren Israel landing in second. The first half of the race featured a close battle at the front of the field between Guthrie, Israel, Dell, Pete Stefanski and Cory Sawyer.

The lone caution of the event happened on lap 11 when Casey Johnathan lost a wheel on the track. The ensuing restart saw Stefanski move into second place behind Guthrie. The pair battled side-by-side for a few laps before Stefanski eventually pulled ahead into the lead.

Stefanski drove on the final three laps to score his second win of the season. Guthrie finished second followed by Sawyer, Israel and Dell.

The Gippster’s Collision Mini Stocks took part in the fourth round of the Ransomville/Genesee Mini Stock Series between the two tracks. Former Genesee champ, Dante Mancuso, picked up his second win of the series at Ransomville. He started on the pole and grabbed the early lead, but he did face a challenge along the way.

Chris Leone started dead last after switching cars after his heat race. He did not waste any time as he passed Mancuso for the lead following a restart on lap 4. Leone’s lead was short lived, however, as Mancuso wrestled the top spot back just two laps later.

Coming up this Friday, July 12, at Ransomville is Joe Scholtisek Super Fan Special for the 358 Modifieds with $2,000 up for grabs to the winner. The Mini Stocks will compete in the $400-to-win Dick Wilkinson Memorial. The Sportsman, Street Stocks and Novice Sportsman will also be in action. Racing starts at 7:15 p.m.