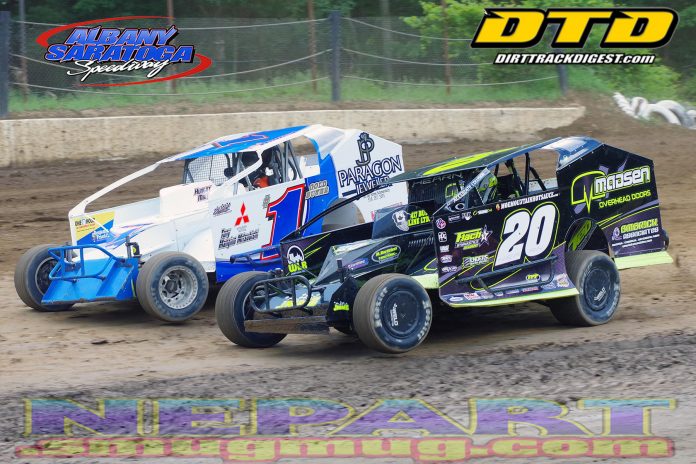 MALTA, NY – Brett Hearn knows a good thing when he sees it.

So when he saw he was starting eighth in Friday night’s modified feature at Albany-Saratoga Speedway, he pounced.

The win was the 135th of Hearn’s career at Albany-Saratoga Speedway.

“I had a couple of bad nights, so I had a better starting spot than I’m used to,” said Hearn after the win. ”I didn’t want to waste that $4,000 (the winner’s share of the Horning Memorial, a tribute to a long-time dirt track racing fan who died last year.)”


Hearn moved to the top as the drop of the green flag, and it only took him six laps to get by Jackie Brown Jr. for third.

Ken Tremont Jr., who has also been in a slump in recent weeks at Albany-Saratoga, started right behind Hearn on the starting grid and was playing follow the leader in the early stages of the race, keeping himself in contention for a victory.

Hearn went around Olden Dwyer coming out of the fourth turn to move into second on lap eight, and set his sights on Reckner, who had jumped into the lead from his No. 3 starting spot on the first lap.

Hearn bided his time, looking for the quickest time around the speedway, but once Reckner got into lapped traffic midway through the race, Hearn was done waiting. He swung high coming out of the second turn on lap 22 to put the Madsen Motorsports No. 20 into the lead.

The first caution of the race came out on lap 26 when Dwyer got around between turns three and four, and on the restart, Tremont began battling Reckner for second, while Hearn started to pull away.

With clear sailing, Hearn continued to pull away and beat Reckner to the finish line by 14 seconds. Reckner’s second-place run was his first top-five finish of the season, and was his best finish since a runner-up to Tremont on July 21, 2017.

Completing the top five were Britten and Mike Mahaney.

“You know, when we went out for warmups, we were terrible,” said Hearn. “We threw a whole different deal at this car and crossed our fingers, and it worked.”

“I was running where my car was the best,” said Reckner, who runs a Dave Hunt spec motor in his car. “I felt pretty good, but Brett was better.”

Marc Johnson and Matt DeLorenzo went into the night tied for the lead in the modified points race, but Johnson came out with the lead after finishing sixth. DeLorenzo was involved in a heat race accident and had to make repairs to the front end of his car, which put him near the rear of the 25-car modified field. He then worked his way back up to 10th.

Tim Hartman Jr., making a bid for his second straight sportsman championship, drove to his third win of the year in the 25-lap sportsman feature, which paid $1,000 to win.

Hartman Jr. was a rocket from the drop of the green flag. Coming from a 15th starting position, he put the Parillo Services No. 22 against the berm, and was passing cars in bunches. After 10 laps, he was up to sixth, and the next time, he passed both Marty Kelly III and Derrick McGrew Jr. to take over fourth.

Taking advantage of a restart on lap 15, Hartman Jr. blew by veteran Tony Ballestero for second and then took the high line out of turn four to take the lead away from James Meehan, who had moved out front on lap seven.

Despite another restart on lap 24, Hartman Jr. easily picked up the 20th career win of his career at Albany-Saratoga Speedway.

“There was a top tonight,” said Hartman Jr. in victory lane. “I was lucky to find it before the guys in the front of the field found it.”

The 25-lap pro stock feature was the last race on the card, but was just as entertaining as any of the others. When Kim Duell took the lead away from Dan Older, Josh Coontradt was a close third, and it was only a matter of time before Coonradt got involved in the battle for the top spot.

He got some help, when Brandon Gray got into the rear end of Older and spun him around, moving Coonradt into second.

Duell and Coonradt were dead even as they crossed the finish line on lap 20, but Coonradt then got his nose in front of Duell coming out of the third turn on lap 21 to take the lead for good.

Following Coonradt and Duell across the finish line were Chucky Dumblewski, Brandon Emigh and Ed Thompson. Gray originally finished fourth, but was placed 11th for spinning Older out.

The Haun Welding limited sportsman ran a Native Pride Ira Hayes Tribute, honoring Hayes, a Native American who was one of the six soldiers involved in raising the American flag at Iwo Jima during World War II.

Dan Grignon came away with his first win of the season, moving into the lead on lap 10. He had to survive two restarts, including one on the final lap of the 20-lap feature, to take the checkered flag ahead of Tucker O’Connor and Colin Bokus, who was a substitute driver for his brother Dylan.

The Lake Auto Parts street stocks were also in action Friday night, with Rowdy Burch recording his first victory of the year. Burch and Jimmy Duncan were door-to-door on lap 11, and ran side-by-side for three laps, with the two cars touching coming out of the fourth turn on laps 13 and 14. But Burch was able to maintain the lead each time, and Al Relyea got past Duncan for second on the final lap.