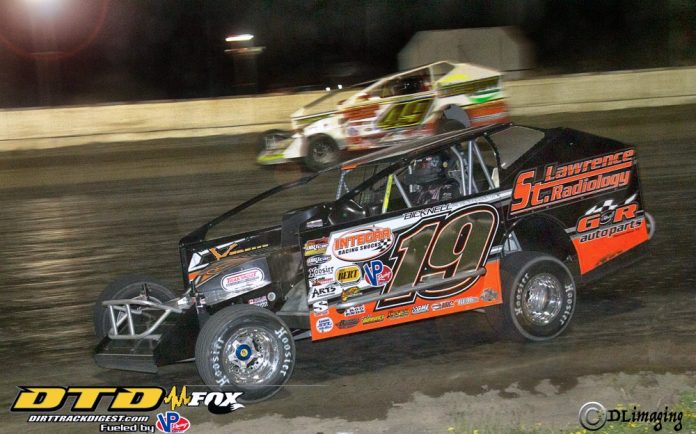 HOGANSBURG, NY –  On a night that started too look like Mother Nature would take over and wash it out, the Mohawk International Raceway was determined to get the 2nd leg of the MIR 358 Modified Series complete. With hot temperatures and determination, the show went on and great racing was provided to a packed grandstand and the evening sponsor, St. Lawrence Radiology.

In the MIR 358 Modified Series it was Chris Raabe taking the early lead over Billy Dunn, Carey Terrance, Lance Willix and Michael Maresca at the drop of the green flag. It didn’t take long before Dunn would drive by and take over the top spot on lap 3 which left Raabe in a battle with Lance Willix for position number two. Once in the lead Billy Dunn showed how much he remembered how to drive this track as he ran away to a straight away lead by lap 10. After a lap 12 caution which saw Preston Forbes slide off turn 2, the restart saw a new challenger come to the top 5 and his name was Tim Fuller. After starting 9th the two time and defending track champion made his way to 3rd as he got by Raabe and Maresca, and quickly closed in on the top two drivers. A near miss occurred on lap 23 as Fuller and Willix battled for 2nd, they came into contact with Corbin Millar sending him spinning in turn one which brought out the yellow on lap 23. When the race returned to green Dunn continued in front but Tim Fuller was right there to challenge. As the field raced down the backstretch the night was over for Chris Raabe as he headed pit side while running 4th. Meanwhile Dunn and Fuller continued their battle which has gone on for the last couple of weeks. Fuller would take the lead on lap 30 as the track began to take on rubber making the inside lane the fast way, but lapped cars would not make that very easy. With 10 to go Fuller had the lead over Dunn, Willix, Maresca and Jordan McCreadie. As the laps wound down Fuller was staying put to the bottom and Billy Dunn knew the high side was his only chance. On the final lap heading into turn 3 Fuller was trapped behind a lapped car as Dunn charged to the high side. Despite drawing even with Fuller in turn 3 it was not to be as Tim Fuller played it perfect scoring his first Twin Leaf Stores 358 Modified win of the 2019 season and 4th MIR 358 Modified Series win. Dunn settled for 2nd with Michael Maresca, Lance Willix and Jordan McCreadie completing the top 5.

The Crossroads Tobacco Sportsman 25 lap event saw Robert Delormier take the lead in the early laps over Ricky Thompson, Delbert Legrow Jr., and Mike Stacey. Delormier was fresh off of a win at the Cornwall Speedway last Sunday and was on a mission to get his first win of the year at Mohawk but Thomas Cook had something to say about that. On lap 10 Cook would take his car to the bottom and take over the top spot as Ricky Thompson would follow in his tire tracks to the 2nd spot. The top 3 drivers would put on a great show for the fans as they used the bottom lane, which had the most grip all evening long. With Cook Thompson and Delormier out in front the field started to string out and 4th place Zach Arquiett and 5th place Shane Pecore could only hope for a caution flag to maker a late race run at the top 3 drivers. On lap 22 Cook and Thompson were able to put some distance between themselves and third place Robert Delormier, and the battle was on. On the final lap Ricky Thompson started to make his move as the top two headed into turn three. Cook drifted up the track slightly allowing Thompson to get the nose of his car alongside Cook, but that was all he would get. Thomas Cook would fend of the late race rally and secure his 2nd straight win in the Crossroads Tobacco sportsman. Thompson claimed his best finish of the season of 2nd over Robert Delormier, Zach Arquiett and Shane Pecore.

It was a night of redemption in the Mod Lite division this past Friday night as Styles Arquiett who has been plagued by motor issues all season, jumped into the top spot early as he took the lead from pace setter Brad Reif with Harley Brown in the number three spot. Once in front Arquiett showed how strong his new team was as he drove away from a quality field and held nearly a straight away lead by lap 7 but opening day winner Kevin Foster was on the charge from his 8th spot. Foster would get by Brown for 2nd and begin his run at the leader. Arquiett had a great car all night long and was showing no signs of letting up, even as he worked lapped traffic. Without the help of a yellow flag nobody was going to catch the very fast Styles Arquiett on this night, as he charged to his first feature win of the 2019 season in Mod Lite. Kevin Foster would claim his 4th straight runner up finish of the year over Nick Mallette Harley Brown and Ian Bressett.

The Novice Sportsman division had seen 5 different winners in the first five races and Jonathan Rush was looking to make it six as he jumped into the top spot over Deric Ellsworth and Gavin Riddell. With the bottom lane being the dominant lane, Rush stayed glued to that inside lane as Gavin Riddell would make his way to the number two position on lap 5 as he began his charge to try and catch the leader. With 5 laps to go Riddell had caught Rush and was looking to make his move as behind them Dan Reif would charge to the third spot. As the field headed into turn 3 Jonathan Rush made one mistake as he slid up the track allowing Gavin Riddell to charge by on the inside with 4 laps to go. Gavin Riddell would lead the finals in dominant fashion and would become the first two time winner in the Novice Sportsman ranks at Mohawk. Jonathan Rush would cross in 2nd over Dan Reif, Dale Gonyo and Deric Ellsworth.

The Bandit 12 lap feature was a great battle all night long. Mitchell Regan would be the driver to beat as he held the top spot for the opening 5 laps and was looking to score his first career win. Matt Zira has been on a roll as of late winning the last three races he has competed in which included a big pay day two weeks ago at Can Am. Zira would take the lead on lap 7 and would bring division rival Francis White with hum to the number two spot. These two drivers would once again pull away from the field and put on a classic battle for the top spot. With two to go White and Zira made slight contact sending Zira sideways and White was able to draw alongside down the back straight away. Zira would remain calm as he took the lead back off turn four coming to the white flag. Matt Zira would once again hold off a determined Francis White and score his third straight win in the Bandit class. Francis White would cross in 2nd followed by Mitchell Regan, Justin McIntyre and Jeff Putnam.

Next Week White’s Plumbing and Brielle’s Beauty Bar will be on hand as title sponsor for a full program in all five classes with the first green flag set to drop at 7:30pm. Reminder to all Canadian race fans that Canadian Money will be accepted at par at the main gate all season long. Also do not forget to grab a receipt at the toll booth in exchange for a free bridge pass that night.

For the latest news, results and points and everything happening at the speedway, be sure to check out our website at mohawkintlraceway.com. For even more news be sure to follow our Facebook and Twitter pages.