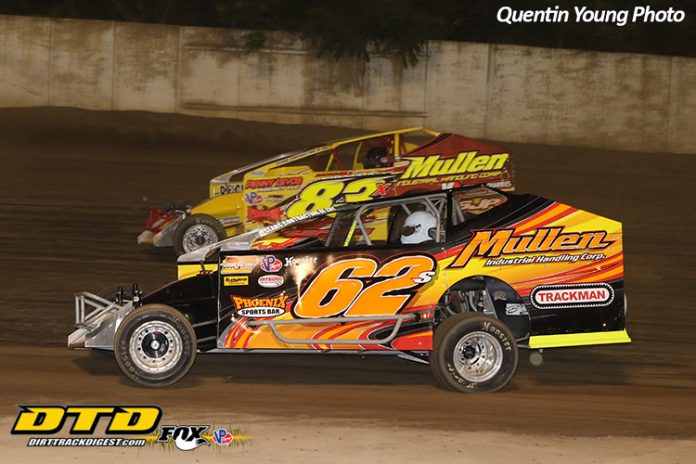 BREWERTON, NY – Tom Sears Jr. aced a slick surface and scored his second Brewerton Speedway win of the season, the first repeat winner of the year.

Chris Hile worked past wife Katelyn on lap three to take the early lead in the 35-lap Modified feature, but Hile wasn’t the fastest car in the first laps. By lap five, Jimmy Phelps had drove from ninth to second, ready to make one more pass on Hile. However, Hile wasn’t going to be disposed of like the rest, and began to pull on Phelps by lap 10. Over the next handful of laps, Hile built up a lead, while Tom Sears Jr. slid into third from 11th.

As halfway neared, Sears closed in on Phelps, finally making the pass on lap 17 after some battling. It didn’t take long for Sears, rolling the bottom, to close in on Hile, getting within striking distance by lap 21. Sears stayed patient as they rolled through some traffic, but once the traffic cleared, Hile went back to the top where he made his early-race speed. This worked right into Sears’ plan, as he dove low and took the lead on lap 28. Behind the top two, Tim Sears Jr., Phelps, and Billy Decker fought over third.

After losing the lead, Hile altered his lane and stayed close to Sears, within a car length as they worked through traffic. With two laps to go, Hile tossed the car into turn three and clipped a lapped car in a desperate attempt to keep pace with Sears, knowing a car in between him and the leader meant no shot at a win. The contact sent Hile into a lazy spin, drawing the caution and setting up a two-lap dash.


Now, uncle and nephew Tom and Tim Sears Jr. lined up nose-to-tail for the restart, but the restart was as close as Tim or anyone could get. When the checkered fell, it was Tom Sears Jr. becoming the first repeat winner of the year. Tim Sears Jr. held off Billy Decker for second, while Jimmy Phelps and Chad Phelps rounded out the top five.

“We updated our program quite a bit over the winter and it’s really starting to show,” Sears said. “Now I just have to drive it. In a late restart like that, I don’t worry about anybody else behind me. You still got to run your race, and if you don’t run your race you get beat.”

In the third round of ESS Speedweek, Larry Wight ran a flawless race to lead wire-to-wire in the 360 Sprint series, his second winged win of the year. Mark Yorker and JJ Courcy mastered the bottom to score Sportsman wins, while Casey Sykes grabbed his third in a row in the Mod Lites.