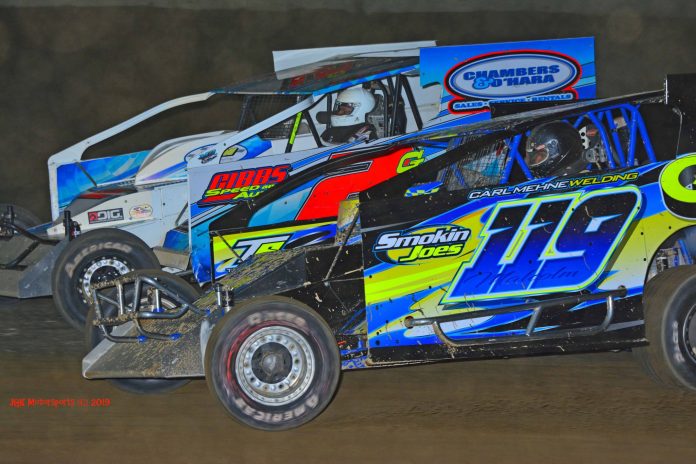 BINGHAMTON, NY –  A very warm race night, along with a full pit area made for some great racing action at Five Mile Point Speedway. Mother nature tried to put a damper on the event, but the track crew did a great job of getting the surface ready to race.

Twenty three modifieds were on hand all looking to bring home the checkered flag. The front row was made up of Alissa Cody and Brad Shaffer. When the green flag flew it was Brad Weaver coming from third taking the early lead. On lap five Scott Landers made the move around the Weaver machine. Scott took a commanding lead. He had some competition making the way from tenth. Brian Malcolm who was looking to pick up win number three was the driver on a mission. He made it to the second position with his sights set on the top spot. It took some time, but he planned his move. On lap twenty five he took over the lead and never looked back. The battle then was for second with Landers and last years Sportsman Champion Alex Yankowski. This was the first visit for Yankowski of the 2019 season, in a modified. He started in position fifteen working his way through the field on the outside. It was on the last lap that he made his move on the Landers number 133. Alex finished in the second position. That found Landers in third, fourth to Brad Weaver and rounding out the top five was Rusty Smith.

The Crate Sportsman feature had Tyler Peet and Tom Hampton pacing the field to the green. Tyler took the early lead with Corey Cormier working his way into second. Corey and Tyler raced side by side throughout the race. Neither giving up to bring home the checkered flag. The battle behind them was fierce as well. Todd Titus and Randy Browkaw battling for position. The race was slowed for three cautions one coming on the white flag lap. This tightened up the field giving the top five one last chance to steal the win. On the restart Corey made sure that he would once again find his way into victory lane. Following him across the line was Tyler Peet, Blaine Klinger, Randy Browkaw and Todd Titus.
The growing Factory Stock class had the race winner being decided between father and son. After winning his qualifying event Buck Mills Jr., battled hard with his dad Buck Mills Sr. in the fifteen lap event. Charlie Towner paced the field to the green. Mills Sr. grabbed the early lead with Junior in tow. The Towner machine and Buck Mills Jr., battled for the second position giving Buck Mills Sr. a chance to open up the lead. On lap caution came out for Adam Gilbert that tightened up the field. This gave Ray Lindquist a chance to close in on the third position on the restart. As Buck Sr. opened up the lead the rest of the field was looking to move forward. When the checkered flag fell it was Buck Mills Sr. recording another win. Buck Mills Jr. was second, third went to Ray Lindquist, fourth to Charlie Gilbert and newcomer Cyrus Homer in fifth.

The Wingless Sprints made an appearance. This is a fairly new division in the Southern Tier. They put on a great show. One driver who has raced a full bodied car before Steve Simpson grabbed the qualifying event. The race found Mike Traver grabbing his second win. He stated that he won the last time he raced at the Point, but didn’t know how to find victory lane. Well he found it this time and said he would be back next week. Finishing in second in the twenty lap event was Mark Connoly, third was Steve Simpson and finishing in fourth was Gary Huston.


Lightning Cat Novice and Expert made their way onto the track. The Novice division was first with John Maynard and Mike Stark bringing the field to the green. Maynard jumped into an early lead. The number 301 of Jason Colwell Jr. was close behind. They raced side by side for a couple of laps when Colwell made a move on the outside and Maynard on the inside of a lap car. Jason came out on top and never looked back. Maynard challenged, but he was not able to take back the lead. Current point leaded Walter Decker made it to third place with a last lap pass. The last feature winner Billy Colwell finished in fourth. Newcomer Kyle Smith recorded an impressive fifth place.

The popular Lightning Cat Expert class once again put on a great show for the fans. Brian Salmini and Caleb Lacey paced the field. When the green fell it was Lacey who grabbed the lead. It was only two laps when current points leader and 2018 champion Nick Kennedy took over the top spot. Caleb stayed close to the Kennedy N2 with hopes that he could get around him. Nick ran the line that has found him most of his win on the outside. Meanwhile Jeremy Warren was making his way from the sixth starting position. He too was using the outside groove to make his way to the front. When the checkered flag flew Nick Kennedy gained more points in his quest for his second championship. Caleb Lacey, Jeremy Warren, Brian Salmini and Dave Simms finished second through fifth.

Excel Junior 600 found Josh Landers and Avery Decker making their way on to the inner loop. Landers grabbed the early lead with Decker in second. Both of this drivers are taking the steps to move up into bigger race cars. They both race with all their heart and soul. The last time we races it was Decker who grabbed his first victory. This week it was Josh Landers picking up another win. In victory lane he thanked his dad Scott and all his sponsors. Stating with out them he would not be able to race.

The Excel 600 modified we up next for the feature event. Samantha Brown and Sharon Stiles brought the field to the green. Samantha jumped into an early lead. Coming on the outside was Adam Mudge in the 5AM. Both cars battled hard when it appeared that something broke on the Brown car sending both cars into the wall. The Mudge car ended up on its roof. Both driver thankfully walked away uninjured, but the race cars were unable to continue. On the restart it was Ayden Morgan who grabbed the lead and brought home his very first checkered flag. He was very excited about his win. Thanked his grandfather for all he does on the car so that he can race.

It was a full night of racing with the program completed by 10:30 PM. Next Saturday night will be a complete show minus the Modifieds. The Wingless Sprints will make another appearance. First qualifier begins promptly at 7:00 PM, don’t miss the great racing action. For more information check us out on Facebook or at our website http://www.5milepointspeedway.com