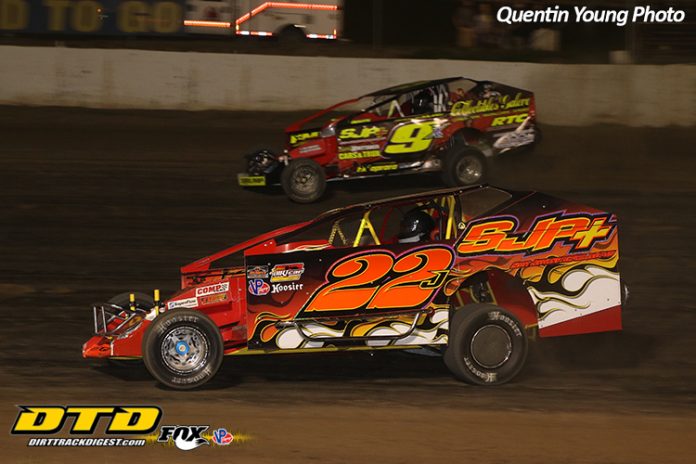 FULTON, NY –  Over the offseason, Jeremy Dygert picked up a small block motor and ventured out to the world of Modified racing. On Saturday night, Dygert reached the top step of the podium, winning the 35-lap small block Modified race at Fulton.

Jeremy Dygert took the early lead in the 358-Modified feature, looking for his first win in the division. Just as Dygert started to open up a gap between himself and Joe Shields, Billy Whittaker lost steering and helplessly slid across the pack, luckily with only one car making minor contact. Obviously, the caution flew, and Dygert continued to lead after the restart, now followed by Tyler Trump and Pat Ward.

As each lap passed, Dygert slowly extended his lead, up to almost a straightaway by lap 20. That all came to a halt on lap 23 as a lapped car spun, erasing Dygert’s lead he had established. Like the first restart, Dygert pulled away, but some new challengers cracked into the top five. Tim Sears Jr. briefly slipped into third, while invader Erick Rudolph and defending champion Larry Wight were right there with Sears.

After falling to fifth with about ten laps left, Todd Root kicked it into overdrive in the late stages. Sliding by Sears, Ward, and Trump, the Root #15 was in second with five laps to go. However, Dygert was a little ways out front, and while Root was able to close the gap in the final handful of laps, it wasn’t enough to make a bid for the lead. After 35 laps, it was Modified rookie Jeremy Dygert claiming the win over Todd Root, Tim Sears Jr., Erick Rudolph, and Pat Ward.