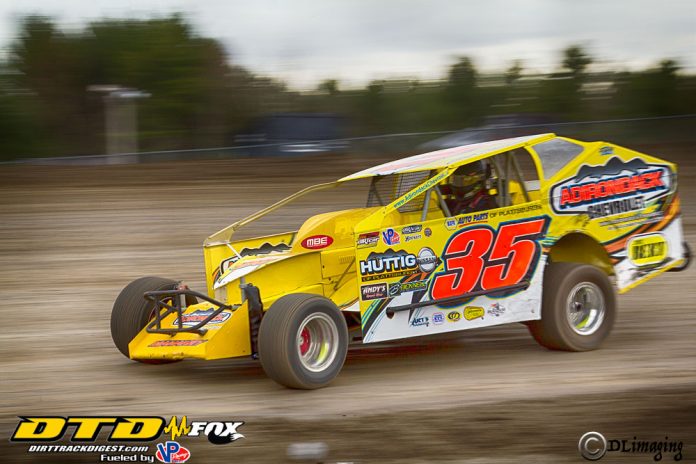 Lance Willix and George Foley led the field to the green in the 30 lap feature event, but it was Steve Bernier who made quick work to get the lead on the outside lane.

Soon after a caution would fall on the speedway, and off the restart Willix went back to the top side to re-take the lead.

He would hold it for a few lap before Mahaney worked the top side to his advantage, to go to the front.

Mahaney would cruise to his second win of the season, lapping up to the sixth place car.

Connor Cleveland would use the outside lane to his advantage, to win his fifth Poirer’s True Value Sportsman feature of the season.

The Corinth, NY driver would sneak by Patrick Picotin on the top side to take the lead, and drive to the victory.

Picotin would settle for second, Adam Pierson would drive from 18th to third, Nick Heywood fourth, and Chris Frennier fifth.

Shawn Duquette would lead more than three quarters of the 50 lap Super Stock Special event, to win his second race of the 2019 season.

Duquette would get by Jim Mckiernan on the inside lane, en route to the win.

Mckiernan would hold strong to come across the line second, but failed post race inspection.

Tylor Terry would finish in second, after driving his way from the back of the pack, Brent Jarvis would be third, Joe Daniels fourth, and Bill Duprey fifth.

Third generation driver Justin Stone would use the inside lane to pass Robert Laware for his first win in the Novice Sportsman feature event.

Nathan Smart would use an up front starting position to his advantage, to pick up the win in the Chris Frennier Motorsports Strictly Stock feature event.