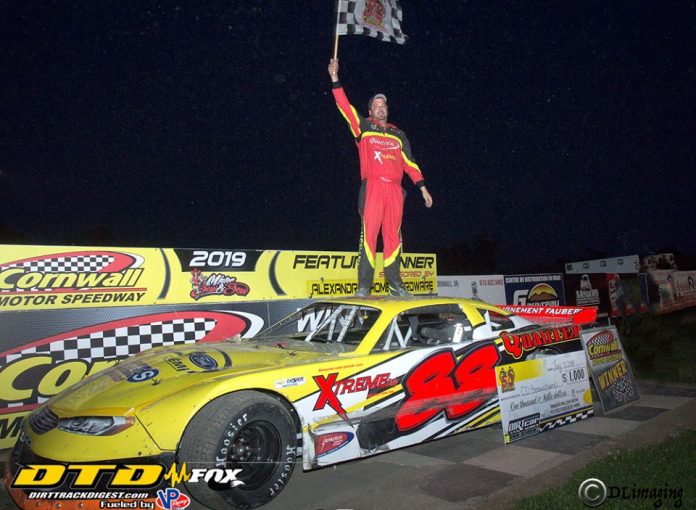 CORNWALL, ON – The DIRTcar Pro-Stock Series started tonight at Cornwall Motor Speedway with a 50-lap feature along with the Quebec Mini-Modifieds, Modified and Sportsman on Alexandria Home Hardware night.

Jay Corbin and Stephane Lebrun were on the front row of the Alexandria Home Hardware 50 as Corbin took the lead over Lebrun and CD Beauchamp in third. First caution came on lap 3 as a few cars got tangled in the backstretch. On the restart, Lebrun to the lead with Beauchamp running close to him. Beauchamp took the inside lane and took the lead on lap 5 with Corbin holding on third. Seguin used the inside lane to pass Corbin as he faded with the top 5 positions being held by local runner with Dave Bissonnette and Gilles Godard with 15 laps in the books. The feature picked up some momentum as they ran as the leaders were in heavy traffic by lap 25. Having a strong run Godard spun in turn 3 on lap 32 and the yellow lights were displayed to the field. Beauchamp the race leader as Bissonnette jumped to second with Rob Yetman joining the front three after starting 12th as Marc Lalonde cracked the top 5 with 15 laps to go. Caution on lap 36, on the ensuing restart Beauchamp got challenged by Bissonnette as Seguin got back to third with the top lane coming to life in the final portion of the feature event. Nobody had nothing for Beauchamp who went on to win the initial round of the DIRTcar Pro-Stock Series. The Loud and Dirty Modified saw Corey Wheeler to the lead with Carey Terrance and Joey Ladouceur battling for second with Terrance getting the edge on lap 5. Terrance started to reel into Wheeler as the feature got to halfway point. Terrance used the top lane to power by Wheeler for the lead on lap 16 and pulled away. Terrance had almost a stretch lead on Wheeler with 5 laps to go. Terrance led the final laps to win his first feature of the season in front of Wheeler and Kyle Dingwall.

Ryan Stabler was the early leader in the Next Level Home Improvement Sportsman leading the 31-car field to the lead as Shane Pecore made a good move to pass Stabler on lap 3 with Brianna Ladouceur and Gabriel Cyr in the mix. The feature had a good rhythm with the leaders in heavy traffic. These conditions brought the leaders together with Stabler closing in on the leader. Pecore led final laps to get a 6th win over Stabler and Cyr completes the top 3.

Another DIRTcar series will be in town next week as the 358-Modified Series will be here with a 100-lap feature race along with a complete show in other classes.