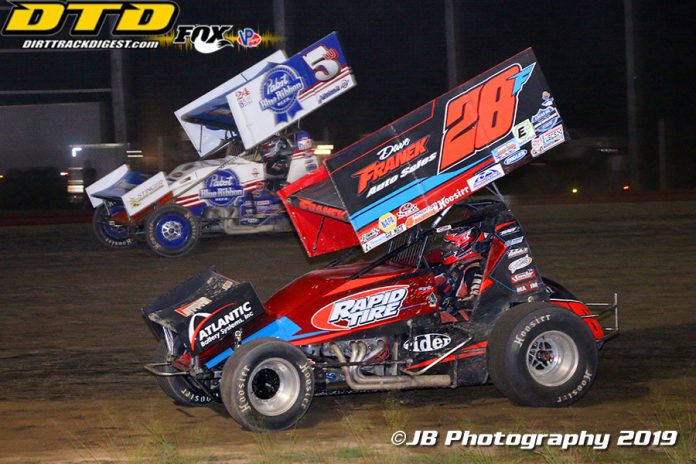 VERNON, NY– Davie Franek wasn’t happy coming into Sunday night with how his 2019 version of Donath MotorWorx Central New York Speedweek presented by Stirling Lubricants has gone. Prior to the Utica-Rome Speedway finale, Franek had just one top five run during the week.

On Sunday night he finally got things turned around. Franek found the right lane at the right time in the 25-lap finale. Coming off a win just two weeks ago in the Cole Cup, Franek made up ground on the inside of the track in the final five laps allowing him to pass both Chuck Hebing and Lucas Wolfe in the closing circuits for his second series win of the 2019 in the E&V Energy / NAPA Auto Parts / Mach 1 Chassis A-Main.

“We sucked here usually,” joked Franek about Utica-Rome. “This is a treat. The Cole Cup a couple weeks ago and then this today. It’s definitely not the Speedweek we wanted. That’s for sure. To go back to (New) Jersey, with a four hour ride, with a win means a lot.”

Paulie Colagiovanni had won three of the first four Speedweek events in 2019. Sunday night ended with a disappointing finish but it was enough to score him first ever Speedweek title.


“Our Speedweek was pretty much flawless until tonight,” cited Colagiovanni. “The car has been hooked up all week. This is definitely a boost in my confidence and lets me know I can hang with the veterans. It means a lot.”

Pennsylvania invader Wolfe opened up the race by taking the lead from the pole starting position. He was out in front when Ryan Harrison took a tumble down the backstretch requiring the red flag. He wasn’t hurt in the incident that also collected Friday night winner Larry Wight.

When the green was displayed again it was Wolfe keeping his car at the front while Hebing looked to mount a challenge. That lasted until lap six when Davie Franek and Colagiovanni got together in the first turn. Colagiovanni stopped necessitating the yellow flag. His night ended there as he went off on the hook.

The green flag came again as Scott Holcomb challenged Hebing for the runner-up spot. He briefly wrestled it away from Hebing on lap seven before Hebing blasted back by him on lap eight to resume his pursuit of Wolfe.

The midway point saw Wolfe and Hebing racing for the lead while Franek began making his charge. At this point he ran fourth in the running order. Just one lap later, Wolfe began encountering slower cars at the tail of the field.

As the laps increased on the scoreboard Hebing closed on Wolfe as he worked traffic with Franek finding the lane on the bottom of the speedway in turns one and two. He was able to make huge gains off the bottom of turn two allowing him to quickly move forward.

Franek took over third on lap 17 and five laps later he drove by Hebing for second as he was continuing to run the cushion.

Franek finally tracked down Wolfe on lap 24. He wasted little time going by as he planted his car on the bottom of the track to take the lead off the second turn. Franek led the final circuit for the victory.

“There was some moisture over there,” stated Franek about his line on the bottom. “The yuke tire got pushed in. I saw Lucas and Chuck were moving around the top and searching. I was just fortunate they didn’t find that yet. I got to Chuck and got by him then I got to Lucas and got by him. He was still on the top.”

Wolfe, fresh off a Pennsylvania Speedweek title and Port Royal Speedway win the previous night, hated to give up the lead late, but he was happy with a podium finish in his second visit to the speedway in 2019.

“Obviously he’s going pretty good here,” stated Wolfe of Franek. “He won the race a few weeks ago and won the race tonight. I had good pace on the top, but I lost it a little bit there somewhere in the last five laps. He just did a good job beating me to the right spot on the race track at the right time. This is still a decent result.”

Hebing earned another podium finish coming across the line in third. Hebing continues to search for his first win of 2019 with the Empire Super Sprints. He’s been close on several occasions.

“I thought at one point I was going to catch the five (Wolfe) there, but he got going,” commented Hebing. “Then Davie came out of nowhere and passed both of us. The fastest car won the race. This was a consistent night for us, but man I want to win.”

Jordan Poirier made the long trek in from Quebec to finish in the fourth spot while two-time and defending Speedweek champion Danny Varin concluded the week with a fifth place finish. 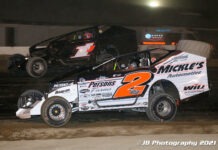