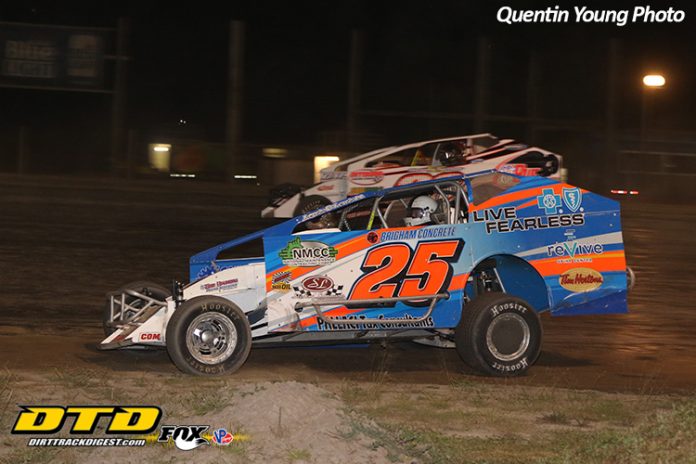 VERNON, NY – The weather gods finally smiled on the Utica-Rome Speedway on Sunday night as the speedway completed just it’s third racing program of the season.  There must be something about Sprint Cars as all three shows Mother Nature has allowed this season featured the winged warriors.  The Lucas Oil Empire Super Sprints along with the DirtTrackDigest.com DIRTcar 358-Modifieds, the DIRTcar Sportsman Series, the Ted’s Body Shop DIRTcar Pro Stocks as well as the Bernie’s Extreme Performance Parts Rookie Sportsman completed the card presented by Broedel Fuel Group and Pioneer Window Manufacturing.  Feature winners on the night included Erick Rudolph, Davie Franek, Matt Janczuk, Luke Horning and Carter Gibbons.

For DirtTrackDigest.com DIRTcar 358-Modified winner Rudolph, it was his second triumph of the 2019 season at Utica-Rome Speedway.  He was able to quickly get forward from 12th starting spot to earn the win.

“I found a nice line down here and down there,” commented Rudolph.  “The car was just going tonight.  We made a couple of fine tune adjustments before we came out.  I was really happy with how the car worked.  I like racing here at Utica-Rome.  It’s always in mint condition and easy on equipment.  Hopefully we’ll be back.”

Claude Hutchings Jr., opened the race by leading the first lap before Glenn Forward found something on the top of the speedway allowing him to secure the best spot at the front of the field on lap three.

Rudolph methodically worked his way forward taking third position just six laps into the 30-lap Modified main.  He watched as Pat Ward ran down Forward and got his taste of the front on lap 11.  At that point Rudolph made his moved to get around Forward as well before beginning to stalk Ward.


Ward ended up missing the bottom lane in turns one and two on lap 14 making way for Rudolph to make the pass.  Rudolph tucked low on the speedway allowing him to drive under Ward for the best spot in the running order.

The only other challenge for Rudolph came with a handful of laps remaining as the back-end of the field came into play.  As he had been the rest of the feature, he was flawless keeping the field behind him.

Rudolph took the checkers while Ward hung on to finish second.  Billy Whittaker had his best run of the season in finishing third after starting sixth.  Billy Dunn motored his way forward from 13th to finish in fourth with Western New York invader Ryan Susice coming home a strong fifth.

The DIRTcar Sportsman Series field a strong contingent of cars the Utica-Rome after being washed out back in mid-June.  As is usually the case the local drivers are hard to beat as Janczuk earned the checkers for the second time in 2019.  The solid field of DIRTcar Sportsman was led to green by Jackson Gill and A.J. Filbeck.  Filbeck led the opening circuit before giving way to Gill on lap two.

A lap three caution for a spinning car bunched up the field allowing fifth starting Janczuk to make a run for the lead.  Janczuk went to the top of the speedway at the green in turns one and two to drive by Gill for the advantage.  He remained in control with Kyle Inman motoring his way to second after starting seventh as well.

Janczuk and Inman battled hard for the top spot in the race only to have the caution come out again on lap 10 as an implement tire was moved out onto the speedway surface causing the yellow.  Once the green came again, Janczuk fired with Inman staying with him on the high-side.  Inman used the very same move Janczuk had used earlier in the race to get the front spot.

The top two remained unchanged as the race reached the halfway point and then the 10 laps to go mark.  It was Inman and Janczuk outclassing the rest of the competition as the ran nose-to-tail out front with Gill and Connor Cleveland racing hard for the third position.

The race took on a different complexion on lap 25 as traffic became a major issue for Inman.  Inman started picking his way through with Janczuk hot on his heals.  Janczuk had the better view in traffic as Inman did his best to navigate his way around the slower cars.

Janczuk saw his opening on lap 28.  Inman got boxed in on the bottom of the speedway as Janczuk took his No. 33 to the very top of the speedway.  The pair exited the fourth turn three-wide in traffic with Janczuk carrying enough speed to take him to the lead.  He’d stay there for the final laps to earn the $1,000 win.

Inman crossed the line in second while Gill was third.  Cleveland took home the fourth position after driving his way to the front from 23rd.  Alan Fink advanced from 14th to complete the top five.

Horning made a rare start in the Ted’s Body Shop DIRTcar Pro Stocks on Sunday night payoff by taking home his first win of the year at Utica-Rome.  Horning went off for the 20-lap feature from the outside of row four.  He quickly made tracks getting to the front.  A lap three restart was what he needed as he got a run to the outside of Shane Henderson to gain the lead.  Horning set the pace with a late caution on lap 16 for a slowing Nick Stone setting up one final challenge for Horning.  He was up to the task as he held off all comers to score the win.  Josh Coonradt made some great moves late to finish second with Henderson hanging on to third.  Pete Stefanski and Mike Welch completed the top five.

The final feature of the evening was the 15-lap Bernie’s Performance Parts Rookie Sportsman feature. Payton Talbot has been the dominant car in 2019 in the division.  He wasted no time opening up the lead at the start.  He was quickly joined at the front of the field by newcomer Rich Christman with Gibbons running third.  Talbot and Christman had a thrilling battle for the fans right up until the final lap.  The pair raced side-by-side into third turn only to have contact between the pair end both of their nights.  Gibbons inherited the lead and held on to it on the final lap to take home the feature win for his first of the season at Utica-Rome.

This coming Friday Tony Stewart’s Ollie’s Bargain Outlet All-Star Circuit of Champions Presented by Mobile1 makes it’s one and only appearance at the speedway in a program presented by Turn One LLC and Clinton Tractor.  Currently Aaron Reutzel, of Clute, Texas, leads the point standings over multi-time series champions Dale Blaney.  Tony Stewart is expected to compete when the series visits the track on July 12.    They’ll be joined by Paul McMahan, Brock Zearfoss, Cory Eliason and a host of others all looking to snag a feature win.  The last time the All Stars visited Utica-Rome Speedway former Knoxville Nationals winner Tim Shaffer reigned supreme.

The All-Stars will be joined by the Modifieds in an open competition event.  The 30-lap, $2,000 to win feature rules are posted on the Utica-Rome Speedway website.  Drivers may utilize numerous motor combinations along with an open tire format.  No sail panels are allowed.

The grandstands admission price for this event is $30 with seniors/military members/students costing $27.  Kids 16 and under are $5.  Pit prices for the event are $40 for all competitors.  Pit gates will open at 3pm while spectator gates open at 4:30pm.  Racing starts at 7pm.