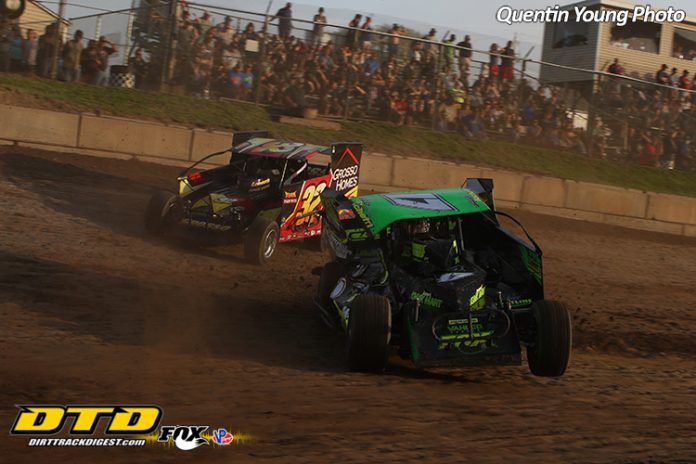 Andy Bachetti wasn’t sure how things were going to go after heat race where his No. 17 sustained significant damage to the right side of the car. The team worked tirelessly until the start of the feature at the Accord Speedway. They changed the radiator, radius rods, the shock tower and shock as well as flattening out the door panel. The work was worth it as Bachetti went on to earn his first Short Track Super Series win of the season which was worth $5,000 in the Battle of the Bullring 7.

“My team came together after we had a little adversity there,” stated Bachetti. “It was a lot of work. We were working right until the feature. We overcame it and here we sit.”

Bachetti started outside of row two for the feature after making the redraw. He quickly advanced to second. From there it was all about chasing second place starting Jimmy Wells. Bachetti took his chance on a lap 29 restart. He got an edge on Wells to get the holeshot at the green. Before another lap could be scored Wells ended up spinning in turn three handing over the lead to Bachetti.

“I got a good jump on the bottom there,” mentioned Bachetti. “I don’t know if he let off or what, but I guess he got wrecked or something happened. It helped the cause. He was good tonight. He would have been tough.”


The win moved Bachetti back into the top three in the point standings in the chase for the North Region title for the Short Track Super Series.

“The win is awesome way to keep grinding away on this series,” stated Bachetti. “Hopefully in the end we are somewhere near the hunt. This is what it takes.”

From Bad to Worse to Good for Gular

Until the checkered flag finally flew on Tuesday night’s feature it had not been a very good day for Mike Gular. Gular broke down on the way to the races before getting help from Ryan Krachun and Cody Hagar. From there he ended up blowing the motor in his No. 2 in his heat race. That made it two motors in one day.

The Ricci clan stepped up and offered Gular a ride in one of their backup cars. It ended up being the best thing that could have happened to Gular as he drove from the back of the consolation to an eventual second place finish.

“I can’t thank everyone enough that helped out today because it didn’t seem like anything we worked on was worth a f***,” stated Gular. “What an unbelievable day. Racing is all about highs and lows. We were pretty low there sitting on the side of 78 (I-78) with our thumbs out. Thank god the Krachuns and them came and got us. Then we got up here and things got as bad as it could get with the car. Those guys (Ricci) offered me a car. I knew they go good up here so I figured we’d do it. No one else offered me shit so we switched the steering around a little bit, put our wheels and tires on it and it went pretty good. I can’t thank everyone enough that helped us out.”

Gular didn’t get to second until the very last lap when he used a three-wide pass of Rich Ricci Jr. and Matt Sheppard off of turn two. He held on through turns three and four for the position.

“I just tried to be smooth and keep my momentum going,” commented Gular. “That’s just a little DIRT motor. When you shut it down it didn’t want to pull you up off the bottom. It was a good feeling to be patient there and not really have to hammer on anybody. It’s Accord so you are going to have contact, but it ended up working out.”

Ricci Represents the Locals on the Podium

Ricci Jr., had a strong night after starting 19th in the feature. He got his big-block rolling on the high-side all the way to a third-place finish. He was the highest finishing non-series regular in the field.

“I got it going on the outside,” mentioned Ricci. “This is an old girl. This car is seven years old. You can’t give up. I gave it a shot. With the big-block you have to have an educated foot because it’s tough here.”

Matt Sheppard was able to pick up some valuable points to regain the North Region point lead by finishing in fourth. Sheppard ended up pitting early to change a shock before charging back through the field to challenge for a podium finish at the end.

“We survived,” said Sheppard. “I don’t know if you could call it in one piece, but it was still rolling when we came in here. What a tough place to race. I’m just happy to get a top five. It was a good points night for us. We were one of the few that were up there in points that survived.”

Sheppard looked to make a three-wide move on the final lap to get around Ricci for third, but he ran out of room on the outside of the speedway.

“I was a lot faster than the 406 at the end,” cited Sheppard. “I kept getting a run off, but kept running out of room. It seemed like the more he tried to block the guy on the bottom the slower he got. I almost thought I was going to be able to get around the outside of him there, but he closed the door a little too quick. I guess after starting mid-pack, falling back and pitting I’ll take a fourth.”

JR Hurburt had a career best run with the Short Track Super Series Tuesday night where he finished in fifth. Hurlburt spent much of the race mixing it up with the likes of Sheppard and Anthony Perrego. The Otego, N.Y., driver was more than pleased with the result.

“Being able to get to fifth from where we came from we are really happy,” stated the 18th starting Hurlburt. “If you can run up front with Perrego and Sheppard, they took off a little on me there at the end when we started running out of tire, but we were there. I’m happy. It was fun running with them guys.”

There were 34 cars in the pit area for the Battle of the Bullring at Accord Speedway. Billy Decker, Leo Fotopoulos, Wells, and Jimmy Horton were heat race winners. Danny Tyler won the consolation…

Billy Pauch Jr., qualified through his heat race only to have a motor expire on his Bill Pascaul No. 3. He failed to start the feature event…

Mike Ricci’s night ended after hard lick with the outside wall in turn one in the consolation event. Ricci was working his way past Kurt Hundeland when the two made contact. Ricci’s car slid sideways and slammed into the wall broadside doing severe damage…

After winning a heat, Horton’s night ended on lap two of the feature. He spun in turn four while collecting Mat Williamson. The frontend damage was too significant for him to continue…

Billy Van Pelt’s night also ended early. Van Pelt got a flat while running inside the top five in the feature. He would not return…

Tyler Treacy had a solid night going running in the top five early in the main-event. Unfortunately, things went south from there when significant damage was done to his No. 96 ending his race on lap 34…

Stewart Friesen rolled to a stop on lap 35 of the feature. Friesen had been smoking heavily while putting some oil down on the speedway prior to stopping. He finished 19th…

Craig Hanson was running second when incidental contact from Williamson caused him to spin in turn two. Williamson was sent tail for his part in the spin. Hanson rebounded nicely coming back through to finish in sixth.