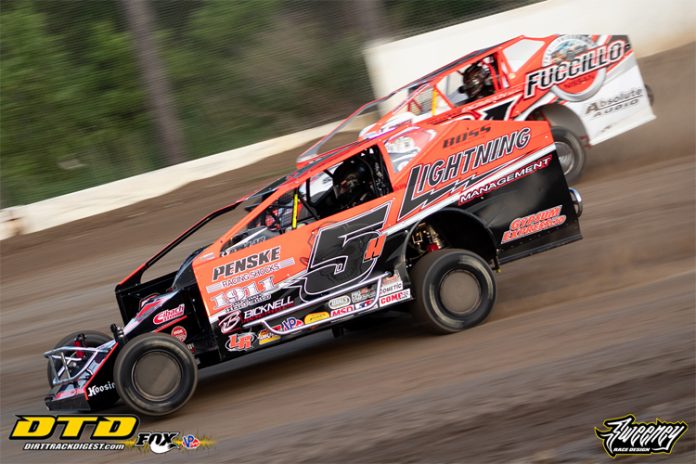 Tyler Trump showed the way early in the 35-lap Modified feature, chased early by Chris Hile. Trump and Hile quickly separated themselves from the rest of the field, which was a hornet’s nest behind third place Joe August. Up front, Hile slowly closed in on Trump, rolling around him to lead lap 10 and quickly building up a good advantage.

By halfway, Hile’s lead was almost a full straight over Trump, and even further back to August. Meanwhile, Jimmy Phelps, Chad Phelps, Tom Sears, and others had reeled in August, with third on back hotly contested. Slowly, this pack all reeled in Trump, with Phelps and August within striking distance of Trump at ten to go. On lap 29, Phelps tossed a slider on Trump to move into second, but was way too far behind Hile to even have a shot at the lead.

Phelps had no hope in catching Hile when he grabbed second, but a lap 32 yellow for a spinning Larry Wight drew the race’s lone caution. On the restart, Hile and Phelps returned to their respective lanes, Hile low and Phelps high. Hile ran a flawless final few laps, and when the checkered waived, it was Chris Hile scoring his first win of the year over Jimmy Phelps, Tom Sears Jr., Chad Phelps, and Billy Decker.


“It’s been a long time since I’ve won a race here on the bottom,” Hile said. “We’re definitely gaining on it and happy. It’s a stout field of cars here and you definitely can’t be down. The car is starting to find it’s happy place, usually I’m up on the top but we made a few changes and it helped it on the bottom, so hopefully we can keep it rolling.”