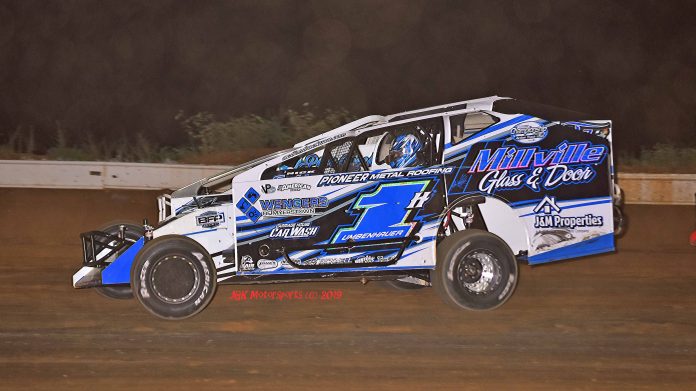 MINERSVILLE, PA – Chamber of commerce weather greeted the fans on Friday as Big Diamond Speedway was back in action on Ladies night. Taking his first ever modified victory at the speedway was Jared Umbenhauer as he held off a star studded top five. Doug Hendricks returned to his winning ways in the sportsman division winning his fifth feature of the season. With some extra cash available for the Street Stocks, it was Jeff Haag finally reaching victory lane in 2019 and TJ Fitzpatrick taking the win in the Road Runner division.

Jimmy Reppert and Shawn Fitzpatrick would bring the Insigner Performance modifieds to the green flag after outside polesitter Justin Grim’s car wouldn’t fire after the initial start was called back. Reppert immediately shot to the lead with sixth place starting Jared Umbenhauer on the move quickly as he worked his way up to the runner up spot. Reppert continued to lead the way as the first yellow flag of the race was brought out on lap 10 as Kevin Beach spun his No. 17 in turn one. On the restart it was Reppert back to lead with the No. 1H of Umbenhauer starting to turn up the wick and pressure Reppert for the top spot. Umbenhauer worked by Reppert fo the top spot on lap twelve but the yellow flag flew before the lap was scored handing the lead back to Reppert.

Unfortunately for Reppert his great run came to and end after something broke on the No. 97 under caution handing the lead to Umbenhauer with a strong running Kris Graver now in second. Umbernhauer continued to lead the field as they went back to green with Graver trying to make the outside work as he looked to get by the leader. Graver could pull even with Umbenhauer through the turns on the outside but Umbenhauer running the low line could always get a better run off the corners to maintain the lead. One lap later Graver drove into turn one just a little to hard and tapped the backend of the leader causing himself to spin and bring out the yellow.

It was Umbenhauer back to the lead with the tracks best of the best all right behind him battling hard within the top six. Rick Laubach, Duane Howard, Ryan Godown, Craig Von Dohren and Billy Pauch Jr were all waging war behind the leader as Umbenhauer continued to run the low line around the track continuing to lead the pack. The last caution of the race came on lap 19 when Frank Cozze spun in turn one as Nick Rochinski also involved. Umbenhauer retained his lead on the restart as the battle behind him resumed with cars banging off one another as drivers refused to give an inch. As the pack behind were fighting amongst themselves Umbenhauer continued to just run his race in the front. With one lap to go Godown worked his way past Howard for second and going into turn three gave it all he had to get around the outside to steal the win but Umbenhauer never waivered off the bottom and carried the momentum off of turn four to his first career victory at the speedway. Godown, Howard, Von Dohren and Laubach were the top five.

“Sometimes, it’s hard to get a lead early because you don’t know where to go and where the others are running,” said a jubilant Umbenhauer. I can’t thank my car owners Mke and Jenn Harvey for sticking by me. We had to take off last Friday night after the car was in pieces after crashing it at Grandview and thanks to my crew, we got it back together and it works just as good maybe even better. I knew those guys were right behind and I didn’t want to take the long way around and just stuck to where I knew the car was good. I can’t believe it!”


After a caution on the initial start of the race, the USS Achey Sportsman feature went non-stop with Doug Hendricks returning to victory lane for the fifth time this season. Wayne Witmer grabbed the early lead from his pole starting spot as the seventh place starting Hendricks started to move through the field quickly and up to second as the field completed lap three. Witmer had opened a sizeable lead at this point but Hendricks was on a mission and by lap six was right there. One more lap and it was over as Hendricks went by Witmer for the lead. Once in front it was all Hendricks as he masterfully worked his way through lapped traffic to win the 20-lap feature by a wide margin. Witmer held off teenager Cole Stangle for second with Dakota Kohler and Brandon Edgar the top five.

With a nice payday of $2000 courtesy of a $500 bonus from the division sponsor Eash’s Towing and Recovery going to the winner of the Street Stock 40 the racing was shaping up to be a barnburner but like sometimes happens in all sports it just doesn’t turn out like we thought. The Street Stock division is highly competitive on a weekly basis but on this night, Jeff Haag had everything working on his No. 454J and completely dominated the event. Haag took the lead on lap two and was never headed after that as he went on to take the big win. The cars of Eric Tripp, Ryan Smith and Kody Sites battled behind for second but with the exception of restarts no one had anything for Haag on this night. Smith, Sites, Scott Thurberg and Chris Derr were the top five.

Returning to the Savage 61 Road Runner division after racing Sportsman for a couple of year, TJ Fitzpatrck returned to victory lane on Friday night. Fitzpatrick would take the lead after the leader Fred Everly spun on a lap two restart. Jim Kost and Chris Holland would go on to challenge Fitzpatrick for the lead, but Fitzpatrick had enough to hold off the challenges and take the win. Holland would finish second with Kris Ney, Matt Ney and Kost the top five.

Scott Riggleman was the winner of the Enduro 50.

Did Not Qualify – Eddie Strada and Dale Hartz.

The Modified heats were won by Jared Umbenhauer, Jimmy Reppert and Rick Laubach.

The Sportsman heat races were won by Doug Hendricks and Dakota Kohler.

Did Not Start – Hunter Whitcomb.

The Roadrunner heat races were won by Jim Kost and Kris Ney.

The Street Stocks heats were won by Eric Tripp and Jeff Haag.