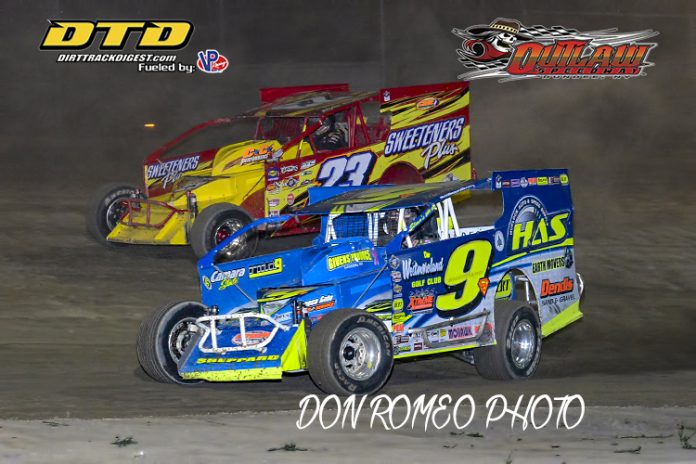 DUNDEE, NY – Super Matt Sheppard once again lived up to his name and all the hype as he picked up his 7th feature win of the 2019 season at the Outlaw Speedway.  Starting in the seventh starting position it was a night of sevens for the 2017 Outlaw Speedway Track Champion as he was surrounded by the likes of such other stars as Alan and Danny Johnson along with Kyle Coffey and Steve Paine at the start of the 30 lap feature event.

Second generation pilot, Billy Paine would jump out into the lead on the opening lap from his outside front row starting spot.  Paine, who has been showing signs of steady improvement since moving into the Friendly Chrysler, Dodge, Jeep, Ram Modified Class full time in 2019 led for the first one third of the feature including a lengthy yellow flag on lap 7 for a multi car wreck including last week’s feature winner, Eldon Payne.  While Billy P. was out in front Sheppard was waging a spirited fight with Dillon Groover as the two slugged it out for several laps while moving towards the top spot.  After a brief one lap lead at the head of the class, Groover gave way to Sheppard who assumed the lead on lap 12 and never looked back.  A jump over the cushion in turn two the following lap by Groover took him out of any further contention as he lost several spots.

From that point on it all Sheppard had to do was stay out of trouble including a couple more caution flags with the last one on lap 27 which put Super Matt’s number one nemesis, Steve Paine right on his rear bumper.  However, The Hurricane wasn’t able to mount any real challenges to the reigning MR. Dirtcar Modified Champion and he had to settle for yet another second place finish, but none the less a good point night for The Hurricane as he continues to put pressure in Sheppard as the two lead the current point battle.

Without question the drive of the night was put on by Donnie Lawson as he started behind all the heavy weights in the sport and was able to drive a flawless race to finish in the final podium spot.  Kyle Coffey continues his impressive consistency by nailing the fourth position while AJ Slideways, Alan Johnson rounded the top five finishers.


Brian Fish came into the night second in points in the Sunrise Insulation American Racer Tire 602 Crate Sportsman Division.  As the twenty car field took the opening green flag, 2017 Track Champion, Karl Comfort took the early lead and looked to shake the gremlins that have plagued the veteran competitor for the past year and a half.  Comfort lead the first 20 laps of the feature event and looked poised to pick up his first feature win in of the year, but Fish was able to mount a late race rally and closed in on Comfort to take over the top spot and go on to his third feature win of the 2019 campaign.  Last year’s Track Champ, Chris Fisher came home for second at the end as a disappointed Comfort drifted to third at the finish.  Current high point man, Jimmy Zacharias wound up fourth chased across the line by Will Shields who rounded out the top five.

In the DIRTcar Hoosier Tire Crate Sportsman Class, Steve Gray has been knocking on the door all season long and was finally able to put everything together to pick-up his first feature win of the season.  However it didn’t come easy as Nicole Hoag kept the pressure up on Gray throughout the entire distance, but once again she came up one spot shy of winning her first feature in the class and had to settle for a great second place.  Will Shields who does double duty in both of Outlaw Speedway’s Sportsman Divisions capped on another steady night by finishing third at the finish followed across the line by last week’s feature winner AJ Lloyd as Jeff Lawrence rounded the top five.

Dylan Cecce and Glen Whritenour have made the Stan’s No Tubes Street Stock Class their personal sand box in 2019 at Outlaw.  Only Aksel Jensen has been able to stop the two perennial favorites in the division having won his lone feature on June 7.  Cecce and GW had won the other eight feature events run thus far during the “19” season with both coming in at four wins each with GW claiming the last two in a row.

When the twenty five lap feature event was over, Dylan Cecce had broken the tie by winning his fifth feature of the year and with it he will maintain a slim point lead over Whritenour who chased Cecce across the finish line in yet another Stan’s No Tubes feature thriller.

CJ Guererri continues to put on impressive drives week in and week out, but somehow just cannot find the winning combination to unseat the Cecce/Whritenour  strangle hold on the class as Guererri came home third at the finish. Veteran drivers, Gene Balmer and Carl Cleveland rounded the top five finishers.

Stan’s No Tubes Heats were won by Guererri and Balmer.

2018 4 Cylinder Track Champion, Adam Austin struggled the first three weeks of the season, but once May 24 rolled around the second generation pilot from Addison, NY has been on a tear.  In fact with his win on this night he has now stretched his undefeated streak to 6 in a row and until someone else steps up to the plate, Austin could be well on his way to defending his track title.

Starting eleventh on the grid in the eighteen car feature event, Austin wasted no time slicing and dicing his way thru traffic and into the lead and once there cruised to victory lane. Ray Hyer, who has been a mainstay in the class for decades could only sit and watch from his second place finishing spot as Austin picked up the win with Scott Lehman, Mike Stone and Matt Sullivan rounding the top five.

Rich Michael Jr. once again made the long tow from his Ishua, NY home worthwhile as he cruised to victory lane for the fourth time this season in the Marion Decker Insurance IMCA Modified feature.

Brandon Smith put on a steady performance from his second row starting spot and came home second at the finish followed across the line by 2018 Track Champion, Rodney Morgan with Bad Brad Smith claiming fourth at the finish.  Dick in the Dirt, Rich Karlnoski rounded out the top five.

The Marion Decker Insurance Hobby Stock Class had a pair of feature’s on the nights agenda with the first being a make-up from last Friday nights curfew.

2018 Track Champ, Marc Minutolo was able to secure the win for his second trip to victory lane in 2019 in the make-up and ended the Wayne Ellison consecutive victories feature wins in the class at two.  Bubba Burnell was able to keep all others at bay to claim second followed across the line by Justin Eldredge, Eric Williams and Brian Lloyd.

In the regularly scheduled Decker Insurance Hobby Stock feature event it was Wayne Ellison rebounding the for the feature win, his fifth of the year and for the second time on the night, Bubba Burnell had to settle for the brides maid position.  Like Burnell, Marc Minutolo and Eric Williams capped a great evenings by finishing third and fourth  in the night cap chased across the line by Jamie Eldredge Jr. who rounded the top five.

In the Winner’s Circle Deli Bandit youth division it was Dylan Riley claiming the feature win.

Outlaw Speedway will take their scheduled Summer Break on July 19 with racing resuming at the Yates County speed plant on Friday and Saturday July 26 and 27 with two full nights of make-up features, practice and more racing.  It’s all part of the Annual Outlaw Speedway Summer Nationals.

For a complete list of all events for both nights simply go to www.Facebook.com/OutlawSpeedwayLLC/ or the track web site at www.outlawspeedwayllc.com.