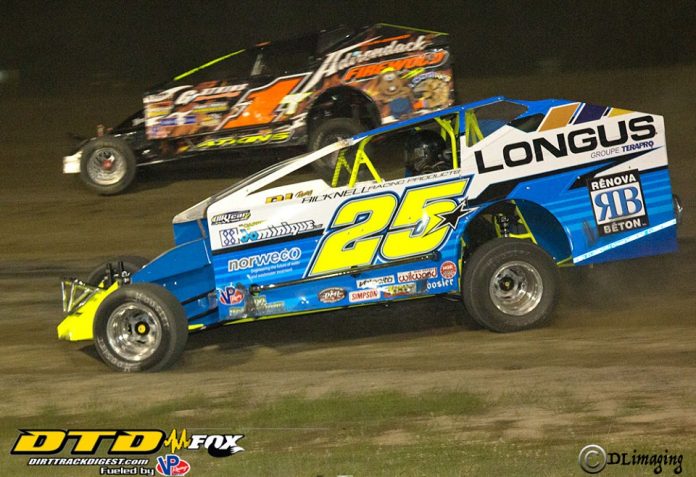 PLATTSBURGH, NY –  Steve Bernier snuck by Mike Mahaney with a few laps to go, for his second win of the 2019 season Saturday night at Plattsburgh Airborne Speedway.

Patrick Dupree and Matt Woodruff led the field to the green in the 30 lap feature event.

A couple of cautions would slow the field before a lap was completed, but it wouldn’t be long before Mahaney would power to the outside for the lead.

The driver of the 35 machine would get out to a full straightaway lead, before hitting lap traffic in the closing stages.

That’s when Bernier would close in, and make his move on the inside lane with just a few laps to go.


Bernier would hold on for his first win since opening night, Mahaney would settle for second, Chris Raabe would finish third, Jessey Mueller fourth, and Mathieu Desjardins fifth.

Adam Pierson would make the pass in the final ten laps, to win his third race of the season in the Poirer’s True Value Sportsman division.

Mike Phinney took off early in the event, before the car started to loosen up in the closing stages.

That’s when Pierson would make his move to win the green to checkered affair.

Travis Bruno would finish second, Phinney would hold on to third, Jason Bruno would come across the line fourth, and finishing fifth was Nick Heywood.

Tylor Terry would take advantage of a late race re-start to pass Michael Wright on the inside for his second win of 2019 in the Ernie’s Discount Tools Super Stocks.

Joe Daniels would make a late race charge to take the runner up spot, Shawn Duqette third, Wright would settle for fourth, and Zach Daniels would come home fifth.

Nathan Smart and Nathaniel Guay would trade the lead in the last five laps, before Smart would take his fourth win of the season in the Chris Frennier motorsports Strictly Stocks.

Robert Laware would take his first win of the season in the Novice Sportsman division.