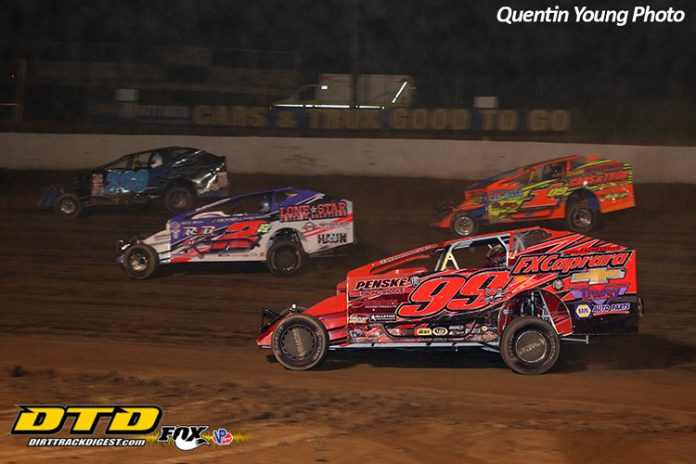 The final handful of laps came down to a shootout between Larry Wight and Rob Bellinger who battled in lapped traffic throwing slide jobs, lead changes all right in the middle of heavy traffic trying not to go down a lap.

The last lap would see Wight leading going into turn three on the high side with Bellinger throwing his car as hard as he could into turn- three and would slide up the track inches in front of Wight in turn four. Wight was able to turn back under Bellinger winning the drag race down the front straight by a slim 0.184 of a second at the checkers.

Aj Kingsley and Joe Shields would bring the 28-car Modified field to the green with Shields leading the opening lap with Tyler Trump taking the lead one lap later.

Trump and Billy Whittaker were in a two-car breakaway at the front of the field with Shields, Kingsley and Jeff McGinnis showing in the top-five.

The caution would wave on lap-10 slowing the two and three-wide battles throughout the pack.

Trump, who was running the high groove out front before the yellow, chose the inside for the restart. Whittaker took advantage of the quick outside lane to blast into the lead.

On lap 15 Whittaker opened a slim five-car length advantage over Trump with McGinnis, Rob Bellinger and Larry Wight who started 18th staying within striking distance of the top-two.

Whittaker was on rails on lap 20 building a full straightway lead leaving McGinnis, with Bellinger, Wight and Ron Davis III battling for third through fifth.

With 10 to go Whittaker held a two second lead as McGinnis, Bellinger and Wight started to slowly cut into the lead with the back of the field starting to play a part in the race.

On lap 28 Whittaker caught the back of the field who were racing two and three-wide allowing Bellinger, Wight and McGinnis to close while throwing slide jobs on each other for position.

With 5 laps to go, the intensity was turned to its highest level as you could have thrown a blanket over Whittaker, Bellinger, Wight and McGinnis as they kept changing positions all around the speedway still in heavy traffic within inches of each other.

Through all the swapping of positions while still in traffic using every inch of the speedway in the top-five, Wight would lead Bellinger by a half-a-car on lap 31. Bellinger would fight back throwing a slide job into the lead on lap 33. Wight wasn’t done yet, throwing a high-speed slide job of his own exiting turn four coming down to the flagger’s white flag.

On the final lap, Larry Wight blasted down the back straightaway with Rob Bellinger hot on his heels. Going into turn three Wight ran the top with Bellinger throwing his car right on the ragged racer’s edge slide job coming up in front of Wight by inches at the exit of turn four. Instead of slowing his pace to not hit Bellinger, Wight turned under Bellinger not losing his momentum and would blast down the front straight even with Bellinger and winning by a very slim 0.184 of a second at the checkers.

The battle behind the top-two was just as intense right to the finish that would see Billy Whittaker, Glenn Forward and Ron Davis III finishing third through fifth with Jeff McGinnis, Pat Ward, Dave Marcuccilli, Jeff Sykes and Todd Root completing the top-ten.

In the June 1st 25-lap holdover Sportsman feature, Torrey Stoughtenger and Robert Gage would lead the opening couple of laps with a two and three wide battle for positions starting right at the drop of the green flag.

Gage and Jeff Prentice were in a tight battle for the lead on lap 10 with Derek Webb, Tom Juno and Alan Fink in a close race for top-five spots.

With 10 laps to go Gage was flying out front with a half-a-straightaway lead over Prentice, Webb, Fink, Juno and Matt Janczuk who started 23rd.

With no yellows late to tighten the field up, Robert Gage cruised to the win. Jeff Prentice, Alan Fink, Derek Webb and Matt Janczuk finished second through fifth.

With 54 Sportsman signed in the pits for the July 13th points races, two 25-lap features were run.

In the first feature Brandon Carvey would jump out to the early lead and by lap 5 would be in a two-car breakaway fight for the lead with Casey Williams. Behind the top-two Rocky Grosso, Addison Bowman and Mike Button showed third through fifth on the scoring tower.

On lap 6 Williams found the speed he needed on the high side to bolt into the lead just before a yellow slowed the race. After the restart Carvey and Williams would swap the lead back and forth on lap 9 & 10.

With 10 laps remaining Williams still led with a slim five-car length advantage over Carvey as Grosso, Jackson Gill and Bowman were still in the hunt within striking distance of the top-two.

The yellow flag would wave on lap 17 when Grosso clipped a uke tire in turn four spinning into the infield. Grosso was able to pull away with no damage.

When the green came back out Jackson Gill would throw everything he had at Casey Williams over the final laps, but Williams didn’t flinch, hit his marks and cruised to victory lane. Addison Bowman, Brandon Carvey and Corey Barker finished third through fifth.

In the second 25-lap feature JJ Courcy would grab the lead at the drop of the green and bolt out to a half-a-straightaway lead by lap 5 leaving Tom Juno, Bob Henry Jr., Rachel Zacharias and Brett Draper to race for second on back.

Courcy was on rails by lap 10 opening a full straightaway lead as Henry, Juno, Charlie Tibbitts and Matt Janczuk looked for the speed to track Courcy down.

With 10 laps to go Henry cut Courcy’s lead in half with Juno, Tibbitts and Janczuk within striking distance of the top-two.

The yellow would wave on the lap 17 slowing the field down. When the green came back out, JJ Courcy and Bob Henry Jr. locked in a close, tight battle with Henry taking the lead with a handful of laps remaining. After taking the lead Henry cruised to the win. JJ Courcy, Charlie Tibbitts, Matt Janczuk and Tom Juno finished second through fifth.

In the 15-lap E&V Energy Novice feature, Pat Nolan would lead every lap. The win was far from easy as he had to hold off challenges and late race pressure from Cody Manitta for the win. Matt Richardson, Mikey Wight and Scott Kline finished third through fifth.

Dirt Modified Nostalgia Tour brought a competitive and sharp looking field of cars for their first ever race at the speedway. Modified feature went to Jason Powers and the Nostalgia feature was won by Scott Gauthier who also won at the Brewerton Speedway on Friday.

This Saturday, July 20th Oswego County Today will present a night of the fastest, family affordable fun in Central NY. Grandstand admission is only $12 with everyone 18 years old and younger admitted free. Bring your Syracuse Nationals ticket stub and receive half price admission into the grandstands. Pit admission is $27 Participant, $30 Non-Participant. Grandstands open at 5:00 pm with racing at 7:00 pm.