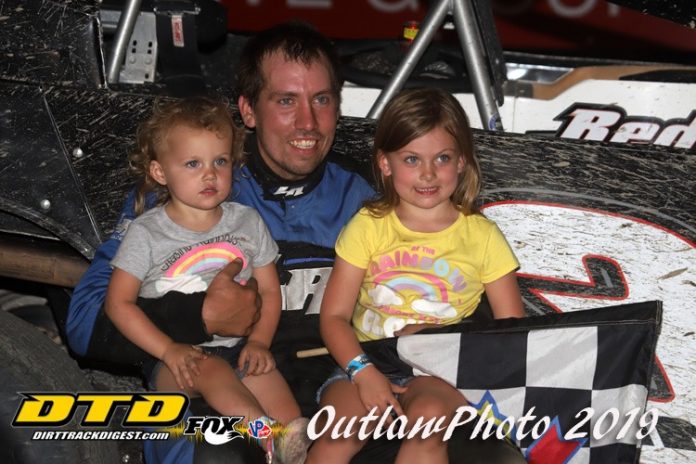 FONDA, NY – What does a chicken BBQ, a huge raffle with many priceless items up for grabs, Banner Night, and great racing action with a complete racing program completed in just three hours all have in common? They were all events that happened at the “Track of Champions” Fonda Speedway on Saturday evening as Corr/Pak Merchandising and One Zee Tees presented a special night at the track called “Autism Awareness”.

Total amount raised for the event to benefit the Crossroads Center for Children in Rotterdam, NY was over $15,500! Fonda Speedway management made a generous donation of half of the 50/50 prize money which totaled $2712 and was part of the final total as well. Great job by all involved in the event including Ivan Joslin and his racing team who had their Autism Awareness paint scheme on their #49 Pro Stock, Stewart and Jessica Friesen who had a big part in the event as well as their son Parker attends the Crossroads Center for Children, and all volunteers who donated their time to the event as well.

The New York State Stock Car Association (NYSSCA) also held their Safety Awards Night for the Four Cylinder Cruisers with Hollenbeck collecting a $75 bonus along with a NYSSCA hat and yearbook while Cole Lawton took home the second place prize from the organization of $25, a NYSSCA hat, and yearbook.


Korey Wilder and Michael Maresca started Sunoco Modified Twin 20 feature #1 on the front row with Maresca taking the lead at the drop of Joe Kriss’ green flag. After starting in the fourth position, Dave Constantino got by Wilder for the second position on lap two with sixth place starter Josh Hohenforst also getting by Wilder for the third position at that point.

Danny Varin started the event in the 10th position and was making his way to the front on lap four, trying a move down the middle of two cars coming out of turn two. The move backfired however when the car on the bottom slid up slightly rubbing tires with Varin who then got into Wilder with both cars spinning on the backstretch. Point leader Rocky Warner and Stewart Friesen were also involved but all four cars were able to pit and rejoin the race at the rear of the field.

On the restart, Friesen got by six cars within a lap but it was called a no start situation so he had to try it all over again one more time. Maresca chose the outside lane on the restart and powered away at the drop of the green flag with Friesen sitting in the fourth position on lap 14 after getting by Bobby Varin. Hohenforst got a bad restart and lost three positions back to sixth in the process with the yellow out again on lap 15 for Wilder who was in the turn two wall.

The restart was single file this time with Maresca continuing to lead while Stewart Friesen got by his wife Jessica on lap 16 for the third position. The top three of Maresca, Constantino, and Stewart Friesen were nose to tail with only two laps to go but at the checkered flag it was Maresca the winner followed by Stewart Friesen who got by Costantino coming out of turn four on the final lap, Jessica Friesen, and Bobby Varin. The win for Maresca was his first of the 2019 season and the second of his career at Fonda in the St. Lawrence Radiology #7mm Teo car with his first win coming back on August 19, 2017.

“It’s been awhile but it’s pretty cool to win here at Fonda in front of this crowd,” Maresca said in the Fuccillo Automotive Mike Cole Memorial victory lane. “We were tinkering with little things on the car in the Firecracker 50 race here a week ago Wednesday and we found something that worked.”

An invert of eight positions for the second Sunoco Modified Twin 20 event saw Danny Varin and David Schilling on the front row with Varin the early race leader. Bobby Varin started the event in the fourth position and got by both Schilling and Craig Hanson for the second spot with an early caution flag out on lap three.

Schilling and Hanson were waging a tremendous battle for the third position after the restart with Stewart Friesen moving up to join in on the race for the third position on lap 10 after starting seventh. Danny Varin held a straightaway advantage on lap 13 and was in lap traffic while Schilling’s great run came to an end on the next lap as he slowed and drove to the pits while running in the top five.

Friesen moved into the second position with five laps to go but when Danny Varin put four lap cars between himself and Friesen with only three laps to go it sealed the win for him in the T-Rex Express #93 over Friesen, Bobby Varin, Hanson, and Rocky Warner.

For Danny Varin it was his second win of the 2019 season after also winning Twin 20 #2 back on 6/8 and the ninth of his career in the division at Fonda.

“I think Brett Deyo needs to do these Twin 20’s more often,” Varin said in victory lane. “This season has seen a lot of hits and misses and it has been a rocky road for this team but thanks to Ed Munger and Dave Cruickshank who support me 100%.”

The 25-lap Swagger Factory Apparel 602 Crate Sportsman feature got off to a rocky start when Josh DeMagistris came out of turn four sideways collecting the car of Nick Scavia who was behind him at the time. Scavia was done for the evening while DeMagistris continued on and took the lead at the second try to start the event.

Sixth place starter JaMike Sowle was a man on the move at the start, using the outside line on the track to get by both Andrew Buff and Tim Dwyer for the second position by lap nine. On the outside of the backstretch, Sowle took the lead away from DeMagistris with the yellow flag out on lap 13 for a car that was stopped on the infield.

The single file restart saw Sowle continue to lead the event with a new driver coming into play at that point, eighth place starter and defending track champion Chad Edwards. Edwards got by DeMagistris for the second position on lap 16 and was right on the leaders back bumper with five laps to go. Edwards got by Sowle on the inside of the backstretch on lap 21 and went on to his first win of the 2019 season and the seventh of his career in the division in the Tom Spencer owned #37.

“It’s good to be back here in victory lane at Fonda,” Edwards told Mimi Lazzaro in victory lane. “I got up to second and then I had to pick and choose to try to find a line to catch the leader. It’s been a tough year, we went back to our old car tonight, the one we won the championship with last year.”

The 20-lap Montgomery County Office for Aging Inc. Limited Sportsman feature started with Bill Port and Brett Mortensen on the front row with Mortensen taking the early race lead. Mortensen built up a straightway advantage by lap five as seventh place starter EJ McAuliffe was making his move to the front, getting by John Young first and then Port for the second position on lap eight.

Mortensen held a straightaway plus lead of 5.535 seconds at the halfway point with McAuliffe, Port, Young, and Steve Wagoner completing the top five. McAuliffe was closing the gap lap after lap but when Mortensen cleared lap traffic safely during the final two laps it sealed the win for him, his second win of the season in the Simmons Machine/Hometown Pub & Grub, Jumpin’ Jack’s Drive-In of Scotia #1B Teo car.

“The car felt good tonight,” Mortensen said in victory lane. “It was tough because I didn’t know where anybody was behind me.”

The 20-lap Algonkin Motel Pro Stock feature started with Jim Normoyle leading from his pole position start. Nick Stone started the event in the fourth position and on lap two he got by Andy Graves for the second spot. On the outside of the front stretch at the finish line to complete lap four, Stone took the lead away from Normoyle with 12th place starter Luke Horning now in the top five.

Horning got by Normoyle for the second position on lap eight but at that point in the race Stone was a full straightaway ahead. By lap 12 the top four had pulled away from the rest of the field with Horning closing in on Stone lap after lap. Horning made one last ditch effort coming out of turn four on the final lap as he ducked inside the leader but he wasn’t close enough as Stone went on to his first win of the season and the 43rd of his career in the division in the Meltz Lumber #27.

“We have been playing with things on the car that we aren’t very familiar with,” Stone said in victory lane. “And I think that we finally have it figured out. I help everyone I can when I can, said the builder of Pro Stock cars that makes it that much better when we win.”

Cliff Haslun led the first five laps in the Trackside Body Works Street Stock feature event until Jason Samrov got by for the lead on a lap six restart. Samrov survived multiple caution flags and a challenge from Dave Horning Sr. to take his third win of the season and the 11th of his career in the division over Horning Sr., Michael Arnold, Haslun, and Al Relyea.

Ken Hollenbeck led all 12-laps of the Four Cylinder Cruiser feature event for his fourth win of the season and the 46th of his career in the division over Cole Lawton, PJ Bleau, John Napoli, and TJ Marlitt.

Next Saturday, July 20 the recovery Sports Grill & BBL Companies will present Hall of fame Night with all divisions in action except for the Four Cylinder Cruisers. Starting time will be 7:00 p.m.