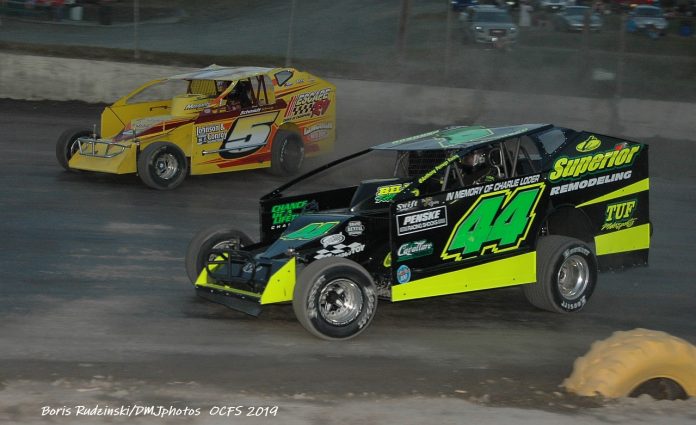 The Orange County Fair Speedway received another major facelift during their early summer hiatus as a brand new racing surface was put down. The track traditionally known as the ‘Hard Clay’ may have to find a new nickname as things were much different at the historic oval on Saturday night.

Rather than the traditional hammer down racing where passing can be at a premium, the track was wide and slippery with drivers utilizing grooves way down on the inner rail as well as up by the outside wall. It was definitely not something seen at Middletown in several years.

One driver that adapted quickly to the new conditions was Anthony Perrego. Perrego won the first 25-lap race for the small-block Modifieds from the second starting spot. He then came back, after starting 10th, and won the second 25-lap feature that capped off the night that also included the All-Star Circuit of Champions.

“Hopefully these two wins turn our luck around a little bit,” said Perrego. “We’ve had some stuff happen that probably shouldn’t have happened. It’s not the fault of the crew. We had a flat tire here, just stupid stuff that happens with the way the track was here. We’ll keep our heads up and see what happens.”


Perrego had the dominant car throughout the evening’s program. He started on the front row by virtue of dominating his heat race.  In the first feature he led every lap. In the second feature he came from mid-pack to score the victory.

“We threw some wholesale changes at it after warm-ups,” commented Perrego. “We got pretty good. For that second feature we didn’t change much. We went to Canandaigua (Land of Legends Raceway) last week and we were pretty bad there. To come here and be that good is a testament to everyone on this team. Matt Hearn and everyone at Teo is working really hard for me. I can’t thank them enough. Obviously, this track is going to help me with my career tremendously.”

Perrego liked the new surface as one would expect after winning both features. The Montgomery, N.Y., driver enjoyed the slower pace that allowed for some more side-by-side racing as guys adapted to the surface.

“It’s a totally different ballpark,” cited Perrego. “It’s great racing I think. I think if we get on a little bit of a softer tire it’s going to be multiple grooves. Not that it’s not right now, but I think you could see four-wide racing here. It’s wide and you could go right to the wall without a problem.”

Perrego used nearly every lane the race track to pass cars. In the first feature he rolled the top on several occasions while in the second feature he was making passes on the inside of cars as he raced his way forward to eventually pass Brett Hearn for the win.

“That first feature we ran the outside with some of the lapped cars,” commented Perrego. “I couldn’t believe how good it was. They were just slowing down so much for the bottom. I couldn’t believe how much better we were out there. Usually here at Middletown you got no prayer. That is a testament to them guys working hard and getting the surface down in a short amount of time and allowing us to put on some great racing.”

On Thursday the Super DIRTcar Series returns to the Orange County for the Battle of the Midway 100. Perrego is glad he got a chance to turn some laps on there before Thursday.

“We’ll definitely have a little bit of an advantage,” stated Perrego. “(Matt) Sheppard and them guys are damn good on this stuff. We are learning. After tonight we learned a lot to put toward the big-block.”

Hearn Improves as Night Goes On

Brett Hearn had a seventh-place finish in the first main before coming back for a solid second place run. Hearn won his heat going away on the outside. He tried to use that same line in the first feature and it just didn’t work.

“I was noticeably better in the second race,” commented Hearn. “I won the heat up there, but after it got dark it just wasn’t there the same way. In the daylight, the bottom was super black and super slick. The bottom just came back so the top wasn’t as good as it was in my heat race.”

Hearn grabbed the top position in the early go in race two before having Perrego track him down and make the pass on the bottom of turns one and two. He was disappointed as he felt like he slipped up a bit.

“I think he was just better than me,” Hearn mentioned of Perrego. “I would have liked to see him go around the outside of me instead of me opening door on the bottom with a lapped car and letting him get the bottom. I don’t think it mattered.”

Like Perrego, Hearn was excited about what the new surface brings to Middletown. It was the widest racing surface he can remember at the facility.

“It’s fun,” commented Hearn. “I think everyone is enjoying it. We are on a pair of 400’s (tire compound). This is virtually a drift competition. I think once we get on the softer left rear at least, if not two of them, that will be a game changer for sure. It’s amazing to walk the track through three and four. The track look’s immensely wide. Visually it never looked that wide before. It’s crazy how wide it is.”

As for his thoughts on Wednesday’s Super DIRTcar Series race he just said, “I think if you run good at Utica-Rome, you are probably going to be pretty good here.”

VanInwegen Gets Second in First Main

Like Hearn, Billy VanInwegen tried to make the top work in the first feature after starting from the pole position. The Port Jervis, N.Y., driver just didn’t have enough to hold off Perrego. VanInwegen was very good running out by the wall in his heat race event giving him hope that was going to be able to go there again. It just didn’t work.

“The 44 (Perrego) was really good,” commented VanInwegen. “I saw they watered the top so I chose the top and tried to hit it for a couple laps. I don’t know if it mattered if I took the bottom. I think he was dominant tonight. I know what we need to do with this deal now. We’ve been struggling with motor problems and didn’t get a chance to work on the car too much. Tonight we got our motor problems squared away and we could focus on the car.”

VanInwegen has spent Saturday night’s at Middletown when he can, but many of his race night’s have been spent in Central New York running a Sprint Car at places like Brewerton, Fulton and Utica-Rome Speedways. He felt like those experiences paid dividends in helping him on Saturday.

“We won our heat race from fourth and that was cool,” said VanInwegen. “I’m excited about what’s going on here. The place is really starting to look like something. I think all the Sprint Car racing Upstate is going to finally pay off here at home. It’s black and wide. I think you are going to see some great racing the next couple of weeks.”

There were 38 small-block Modifieds in the pit area. As stated, VanInwegen, Perrego and Hearn were joined by Tyler Boniface in winning heat races. The two consolation race wins went to Joe Bonetti and Patrick Reiser…

The only crash the entire night needing a tow truck came at the start of the fourth heat when Jeff Heotzler got turned sideways and sent into the wall in on the front straightaway. The frontend of his car was destroyed ending his night.

The two features ran 25-laps each without a caution…

The All-Star Circuit of Champions feature was a good one between Danny Dietrich and Gerard McIntyre Jr. The pair raced side-by-side for the lead until McIntyre slapped the outside wall off of two and slowed. He kept going, but the yellow came out due to dramatic slowing sending him to the rear. Dietrich went on to take the win.