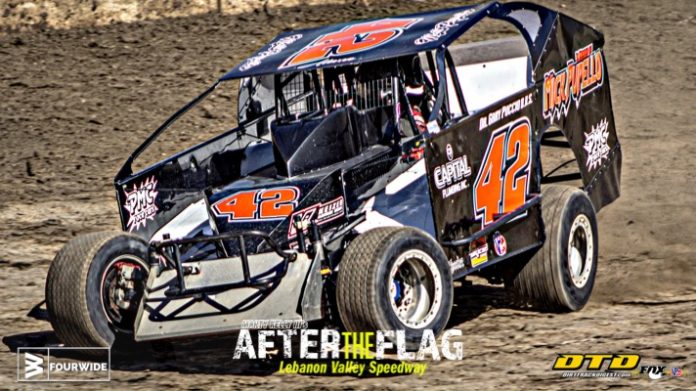 Pupello and Olden Dwyer led the 21 car field to green on the high banks. By lap three, Pupello’s advantage was nearly a straightaway over the field. Meanwhile, Andy Bachetti was making his way forward from seventh starting spot, along with Ken Tremont, Jr. from 15th spot.

By lap 13 Pupello was into lapped traffic with everything flowing smoothly. Olden Dwyer slowed down the front stretch on lap 19 bringing out the yellow flag. “We went around like nine times under caution, I was getting kind of nervous,” Pupello recalled.

On the restart, Bachetti had made his way to second and put some pressure on the race leader Pupello, but only for a moment. Car number 42P was driving away on the outside lane while Bachetti searched all grooves of the racetrack to find something to catch Pupello, but he never would. Pupello crossed the line with about eight car lengths over Bachetti and a very fast Tremont, who restarted back in eighth. Mike King had a strong run, finishing fourth and Keith Flach was fifth.


“This is the Malta car. It’s on coils you know, I didn’t think this was anything that would be good here. When we ran this here a few weeks ago and blew up my big block, but I thought we would have won that. Both cars sitting without motors and Mike (Petrucci) came back with this motor and we decided to put it in this car,” Pupello said, amidst a sea of congratulations and well-wishers by his car after the race. “Gotta thank PMC, Capital Plumbing, CK Electric and Grab Farms.” Pupello dedicated the emotional win to his late father, Mick and Brandon Smith.

Peter Carlotto put a textbook slide-job on Chris Lynch coming to the white flag to capture the sportsman feature. Carlotto worked hard to go from his 12th starting spot in the 20 lap event. Chris Lynch took the lead from polesitter Robbie Colburn on lap 11 but could not hold off Carlotto in the late going.  Joey Coppola was third, Whitey Slavin and Kevin Arnold round out the top five.

Jason Casey once again visited victory lane with the pro stock division. Father Jay slipped up with a handful of laps to go and Jason was there to take advantage, leading the rest of the way. Jason Meltz was third.