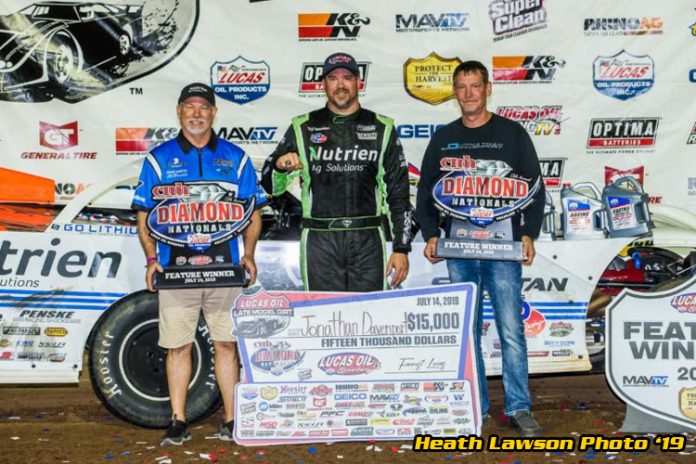 It was not easy for the defending Lucas Oil Late Model Dirt Series National Champion as he had to hold off a hard-charging Mike Marlar to pick up the $15,000 victory. Davenport’s only other win in the annual July event was in 2015.

Marlar managed to pass Davenport for the lead as the two came out of turn two on lap 52 but a caution for Tyler Erb negated the pass for the top spot. Davenport opened up a couple of car lengths advantage over Marlar on the restart. Marlar closed the gap in the final two laps, but came up just short at the finish line.
Shanon Buckingham started alongside Marlar in row number five and went on for another impressive run for the second night in a row as he captured the third finishing position. Tim McCreadie, who led the first ten laps of the race, finished in fourth followed by Billy Moyer.

Davenport and McCreadie started on the front row. McCreadie got the jump on Davenport and took the early lead. Davenport passed McCreadie for the lead on lap 11 and held a comfortable lead for a large portion of the race as McCreadie held the second spot.

As the checkers grew closer, Marlar started to make his move by taking the second spot away from McCreadie on lap 45. Marlar then tracked down Davenport but lost all momentum, after clearing Davenport just before the caution for Erb came out. Davenport led the last seven laps to record his ninth series win of 2019.


“The track started to clean up at the end we were trying to move around,” said the 35-year-old Georgia native. “We were trying to find a line that would work. My line kept going away at the top, so I moved back to the bottom. I guess that caution saved us. Mike [Marlar] has been really good here lately. He has been really consistent. We finally got some speed back in this thing.”

“Steve Martin is here from Nutrien Ag Solutions,” Davenport added. “We have had a heck of a week so far. I want to thank my crew Jason, Tyler, and Matt. They made this car a whole lot better for the feature. We just all put our heads together and we got the results we wanted here tonight. I would like to get another championship for Lance Landers Motorsports.”

“We would have had the pass of the night,” said Marlar who recorded another strong finish with the series. “I am not going to whine about it. I got paid to drive a race car tonight so things aren’t so bad. I really enjoy coming out here. It is such an awesome facility. It is always a great crowd here. There’s a lot of electricity in the air. We had an awesome weekend.”

Buckingham who is one of 11 drivers to win an LOLMDS race this season had his best ever finish at Lucas Oil Speedway. “This place is super nice. How could you not like this place? For whatever reason this track just fits my driving style. My crew worked themselves to death to get us a podium finish here tonight. Those cautions killed me, if we could have had the last 19 laps all green, I think we would have been up there challenging for the win.”