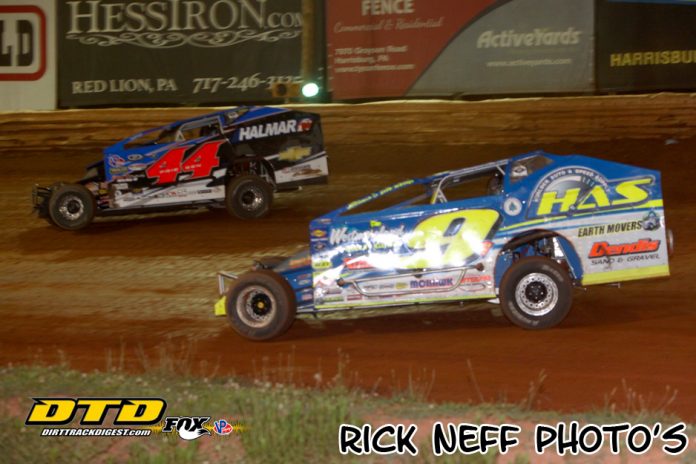 It’s good to be from the Empire State if you compete in the South Region for the Short Track Super Series.  In the first four events, New York based drivers had taken the checkered flags in all of them.  The winners list includes the likes of Stewart Friesen, Matt Sheppard and Anthony Perrego.

Well, needless to say, the trend continued.  Stewart Friesen inherited the lead from Rick Laubach when a mechanical problem sidelined his ride.  From there Friesen was on his game as he went on to win his first ever York County Nationals after losing out the last two years.  The best part was he took home $10,000 for his efforts at the BAPS Motor Speedway.

The track had some character and speed as drivers ran the extreme outside of turns one and two on a cushion that was right up against the wall.  You had to hit it just right or it would significantly unsettle the car.


“The last time we saw a cushion like that was turns one and two at Volusia,” commented Friesen.  “This one was kind of similar.  It’s a lot of fun, but it was getting pretty technical.  At the end I moved down a little bit.  It was enough.  I don’t know if it was better, but it was enough.”

Friesen shot rather quickly through the field.  He was challenging for second second on the opening lap from his sixth starting position.  It took a couple laps to get to second, but once he did he fell in line behind race leader Laubach and waited for an opportunity.

“I was surprised by how fast the car fired off,” mentioned Friesen.  “Laubach was up there and he was just flying and had a problem.  It was unfortunate for him.  I would have liked to race him for it.  We’ll take it.  We had a good race car that could run with him.”

The only real scare for Friesen came with five laps left.  It gave the field one more shot at him.  It was only fitting that the guy running in second was two-time south region winner Sheppard.  That gave Friesen plenty to think about.

“Oh shit,” he said when asked what he was thinking when he realized it was Sheppard behind him.  “As fast as he’s been the first half of this year and the times that he’s drove by me.  I know how good he is on the bottom and he has a ton of forward drive all the time.  I tried to mix it up there at the end.”

Mix it up he did as he entered the middle of turns one and two at the green giving up on the cushion.  That allowed him keep the car in check while keeping Sheppard and everyone else behind him leading to his first BAPS Motor Speedway win.

Sheppard from 12th to Second

Sheppard gave Friesen all he had, but in the end it just wasn’t enough for the Waterloo, N.Y., driver to catch Friesen. After starting 12th, he picked his way up through the field to second before gaining ground on Friesen in the late stages.  After the final yellow he was unable to find a way to steal another win from Friesen.

“It was tough getting there for a while because the track had so much bite in it,” stated Sheppard.  “We had a good car and got up through.  There was a stretch there with about 15 to go where I thought we were better than he was and we were running him down.  It just wasn’t nearly fast enough for as far as behind as we were.  Then we got the caution and got a shot him, but out in clean air he was too good.  We would have needed to be a lot better to pass him and we weren’t that much better.”

During his steady advance forward it seemed like Sheppard just couldn’t catch a break for any of the numerous restarts.  Sheppard routinely restarted on the bottom of the speedway and that wasn’t the preferred lane to get things going.

“I feel like we did better than most for being stuck on the bottom all the time,” commented Sheppard.  “That certainly hindered the march to the front.  By the time we got up to second Stewy had a pretty big lead.”

So Sheppard settled for second which now gives him five top fives so far in the south region and a hefty 108 point lead of second place driver Jeff Strunk.