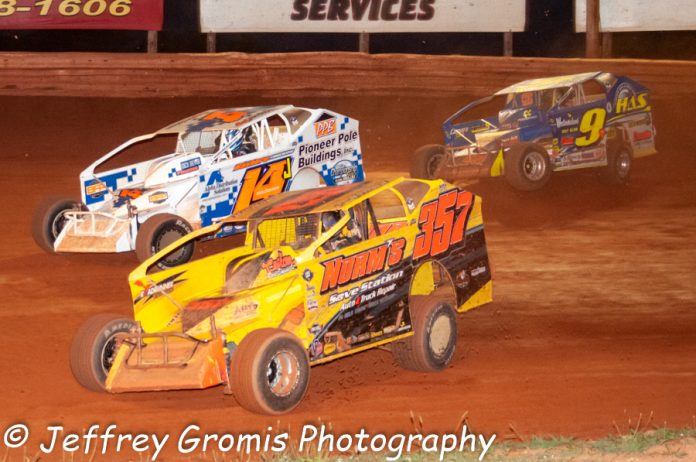 Coming into this weekend, the season has not been so kind to Jared Umbenhauer. The driver has shown speed at both Big Diamond Speedway aboard the Mike and Jenn Harvey No. 1H and at also at Grandview driving the Kevin Brown No. 19. There have been some good finishes sprinkled throughout the year but the driver out of Richland, Pa., just couldn’t find victory lane. Friday night at Big Diamond Speedway, Umbenhauer finally won his first race of the season and first ever win at the speedway. Umbenhauer backed up the win with a so-so finish of ninth on Saturday at Grandview.

It was no surprise when Umbenhauer pulled into the pits on Sunday at BAPS Speedway to participate in the STSS York County Nationals as he has supported the Brett Deyo promoted series as much as possible. However, when the rear door of Umbenhauer’s trailer opened up, the Modified inside was not one of his normal rides. Inside was a second Alpha Distributions No. 14 for Umbenhauer to run as a teammate to Craig Von Dohren.

“I ran Dick’s (car owner Dick Biever) about three years ago at the Coalcracker race at Big Diamond,” Umbenhauer explained as to how his ride in the Alpha Distrubutions No. 14F came about. “A couple of weeks back he wanted me to run one of his big-block motors in one of our cars and I said Dick, why don’t you let me run one of your other open small block here and there and he said that was a good idea. So we got together for this race here and it turned out pretty good.”

Umbenhauer started from the second spot in the 50-lap feature race and hung there all race never dropping lower than fourth of fifth throughout the race. Running the high side the young driver held on to finish third racing against the best the STSS has to offer.

“The curb was getting pretty big towards the end and if you hit it right you could get a heckuva drive off the corner, but if hit wrong and the car went over it, the car would bottom out,” cited an very happy Umbenhauer. “I had a really good battle going on there with Matt (Sheppard). I saw him down there.  I just had to keep it going and was able to hold him off for awhile getting off the corners, but then he finally worked by me. Finishing third to those two (winner Stewart Friesen and second place Matt Sheppard) is nothing to hang my head about. They are the best in the business right now and finishing third to them is like a win.”

It was a great run for Umbenhauer in a strange car and one he hopes to be able to duplicate in the future.

“I hope we can run this car again,” mentioned Umbenhauer. “We’ll see what Dick wants to do and what my other car owners want to do. Hopefully there are races down the road I can run this car. I love driving these open small-blocks, they have so much more power than a regular spec head and your hauling here.”

The “Bechtelsville Bullett” Jeff Strunk authored another strong run in the STSS South series to keep his hopes for the coveted points title alive. Strunk wheeling the Glen Hyneman owned No. 126 hung in the top five all night and at end came home with a strong fourth place finish.

“It was good racing tonight, the track was really fast especially up high,” explained Strunk as he was preparing to load up his Modified for the ride home. “I wish the bottom would’ve come in a little sooner; it was still a little moist down there, so you had to hit it just right to get a run on somebody. Restarts were the key and we weren’t good on them tonight so that’s what hurt us. All in all, it was a good points night to keep us in the mix for the title. We have a great motor is this car, we just have to work on a better set-up to get more of the power to the track.”

Strunk who has quite a history at BAPS (formerly Susquehanna) Speedway with 26 career wins was feeling a little nostalgic afterwards.

“Man, I miss this place,” cited Strunk. “I wish we could run here more often. It’s a helluva a track and the improvements they keep doing are just making it better.”

BAPS Bites
There were 24 modifieds on hand for the race with Brandon Grosso, Danny Bouc and Matt Sheppard winning the three heats…

Motor troubles were prevalent throughout the feature race with no less than four teams suffering engine issues to some extent or another. The cars of Danny Bouc, Frank Cozze, Duane Howard and Mike Gular all suffered DNF’s due to motor troubles…

Rick Laubach was leading the main-event when he had an electrical fire in the cockpit.  He forfeited the lead and his night was over…

Kudos to Brett Deyo, Kolten Gouse and their respective teams for running a quick show. The 50-lap Modified feature was over by 9:15pm making for a not so late of a night for those having to travel long distances…