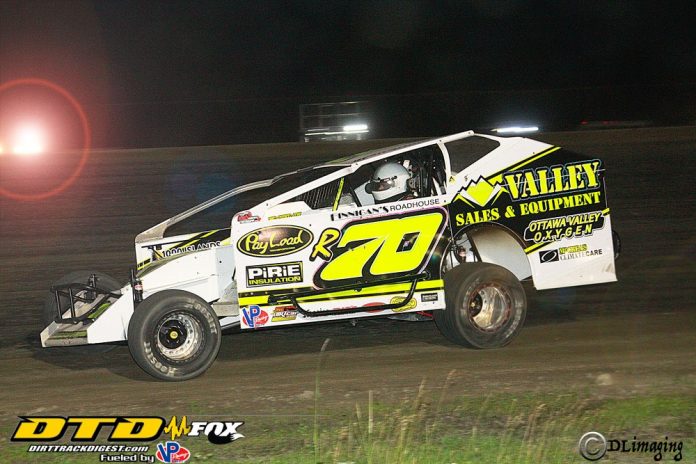 The 2019 Brockville Speedways points’ battles are beginning to shape up within all the classes, some of which are the closest in recent years. In the 358 class, Ryan Arbuthnot has really come into his own this season. Not only is Ryan leading in points at the Brockville Speedway but he is also sighting in a close second in points at Can-Am Speedway.

Ryan explains: “We’ve been working hard on our Brockville program the past couple of years and it’s starting to pay off. We have built some momentum and with our experience we are trying to keep it going.”

This past weekend Ryan captured his 4th win of the season at Brockville.


Tim Fuller, who is probably the most experienced driver in the top five and is currently in second place, should never be underestimated. Fuller, who picked up his first win of the season at the Brockville Ontario Speedway, is a cagey driver who has decided to race Brockville Speedway full-time this season to challenge for the 50th anniversary championship, something he and his sponsor Michael Maraca would dearly love to win.

Tim said: “The first four weeks have been a challenge as the track conditions haven’t been to my liking. But with dryer weather in the last few weeks and a slight adjustment on my part, we finally picked up our first win here last week, which for me is a relief and we can now work on being more consistent.”

Two-time track champion Kyle Dingwall is currently in third place, but definitely has the talent and equipment to move up in the points’ chase. Kyle who has been constantly finishing in the top five has slowly worked his way into a good position to challenge for the title as the season moves past the halfway point. With the season at the halfway point, Ryan will not go unchallenged. Tim O’Brien is still within sticking distance and has the experience and equipment to challenge for the championship. Tim is driving for his brother who retired from racing last season and was a 13- time track champion at the Brockville Speedway. Danny O’Brian would like nothing better to keep the O’Brian name going in the history books. There has been O’Brian racing at the legendary speedway since the beginning 50 years ago this season. In fifth place Chris Herbison, a two time Sportsman champion at Brockville Speedway has moved slightly ahead of Lee Ladouceur who now sights in sixth place. But with Lee’s experience, who has raced everything from four-cylinders to 360 Sprint cars and is a two-time champion of the Ontario Sprint Car series, is still a contender to watch this season

In the Sportsman ranks, a three-way battle has emerged between Ryan Scott, Johnathon Ferguson and Jon Mills. Scott, the current track champion has started off with a tear this season, picking up four wins so far this season.

“The season has been going well,” commented Scott. “We want to keep things as consistent as possible and just stay out of trouble. We got a couple of lucky breaks two weeks ago with cautions. In the end, we picked up our third win off the season.” Johnathon Ferguson in car No. 44 follows Ryan in a close second. Ferguson, the 2017 track champion at Mohawk International Speedway, has put their main efforts this season at Brockville Speedway.

Team manager Elizabeth Ferguson stated: “The team needs a few lucky breaks, cautions really haven’t played in our favor so far this year. The team has also been trying something new on the car that hasn’t come to bear yet, but I’m confident the boys will figure things out soon and get us back in the game.”

Wile in the 84-Milles’ camp Jon is sitting just one point behind Ferguson. The team has really been consistent this season and is defiantly on the hunt for a win. Milles will be one to watch as the season continues to unfold. But with this past weekend results Dylan Kirkland after picking up his first win of the year has taken over second followed by Kalen Draper. Stewart who has been very consistent up until the past weekend has now slipped back into forth place in the points.

In the Mini Stock class, a three-way battle between Andrew Leroux, Marc Dagenais and Jared Galway is shaping up to be a battle. Andrew Leroux from Glen Robertson, Ontario, is currently leading the pack and has been on his game this year. With fourth-second place finishes along with his first ever win, Leroux is working hard to capture the 2019 track championship. He will have to deal with the well-experienced Marc Dagenais who is closing the gap. Finally in the Street Stock class, Michael Dillon who picked up his second win of the season has a slight advantage so far this year. The team’s consistency is paying off with two wins out of the sixth top five finishes so far this season.

Other than Ryan Arbuthnot in the Modified division who is really on his game this year at Brockville there is no other driver who is clearly a dominant factor. With the points battle heating up in all division at the Brockville Raceway, fans are witnessing some great racing as the drivers battle for this year’s 50th-anniversary championship.