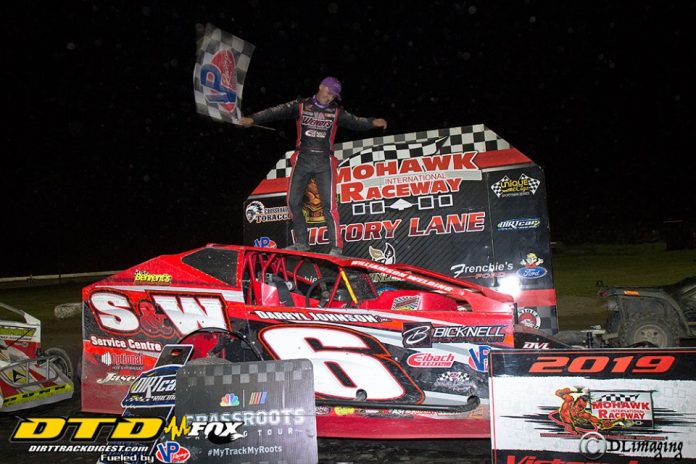 AKWESASNE, NY – Mat Williamson, from St. Catherines, Ontario, has won three out of four DIRTcar 358 Modified Series races and two back-to-back. His unbelievable run continued Mohawk Int’l Raceway as the No. 6 358 Modified parked in Victory Lane four times in four days in DIRTcar competition. ‘Machine Gun’ Billy Dunn was running Williamson down but ran out of laps and settled for second place. Star driver Erick Rudolph missed the podium by a bumper last night but the No. 25R stayed ahead of fourth-place Tim Fuller on this occasion.

Mat Williamson padded his DIRTcar 358 Modified Series points lead with a show of force at the top of the field. It’s a mighty feat no matter what the circumstances but given this is one of the most competitive groups of 358 Modifieds on the tour in years, it’s especially impressive.

Williamson explains his good fortune, “We are certainly rolling. My car owners make it easy for me to go and race one hundred-something times a year and not wear our guys out. It’s pretty cool. It’s nice to win in multiple cars at multiple race tracks. It seems like right now we’ve got a good car on restarts and short runs. The cautions can help in these races.”
It was a caution that gave Williamson the chance to jump then-leader Erick Rudolph and the No. 6 motored away to the lead.

In the previous night’s race at Cornwall lapped traffic almost cost Williamson the win but at Mohawk the No. 6 car was able to cut through the backmarkers.

“We could maneuver. I could get through lapped traffic pretty easily. It was kind of nice. Erick [Rudolph] seemed really good in the beginning but faded. We needed a caution to get rolling,” said Williamson.


Billy Dunn advanced eleven positions and fell just short of making a run at Williamson for the lead.

Dunn described the race, “I’ll take second any day starting from twelfth. It was really tough to pass. I don’t know if I had anything for Mat [Williamson] or not but I certainly would have liked the chance. I thought I used my stuff up a little bit getting to the front. As soon as I got there I knew that was about as good as I was gonna get. I would have liked a late caution but we’ll take second for sure.”

Erick Rudolph is one of the best drivers there is behind the wheel of a DIRTcar 358 Modified but these Series races have brought out the best in everyone who attends making them incredibly competitive and fun to watch. Only four cautions halted racing action in two days and 175 Feature laps.

Rudolph was content with the finish and noted, “Third ain’t bad with the competitors that are here. Any time you can end up on the podium at any of these races it’s a good thing. We had the lead and it just slipped away from us. We were better on the longer runs and he [Williamson] was a little bit better on the short runs. Can’t complain.”

Sixth place finisher Mike Mahaney was very fast off the trailer. He took home the Billy Whittaker Cars Fast-Time Award worth $100 plus a special $150 bonus from Gauvreau Transportation.

Dave Marcuccilli, who has been fast and consistent at all the Series races, is the recipient of the free Hoosier Racing Tire as he finished in the randomly selected position, ninth.
Next up, the DIRTcar 358 Modified Series soars into Utica-Rome Speedway on Sunday, July 21.