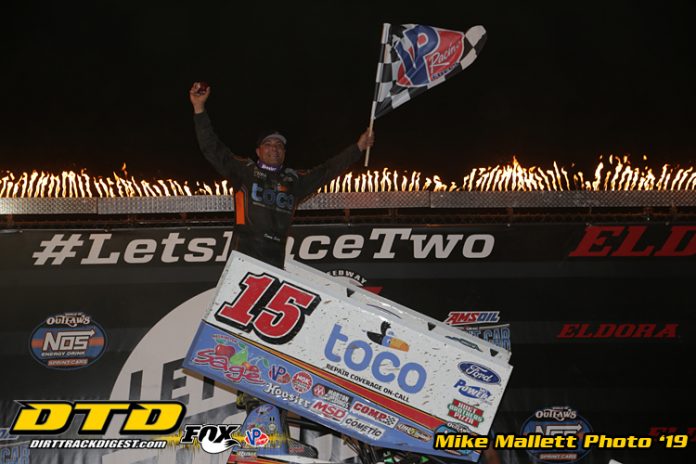 He used that “magic” to cruise to his second World of Outlaws NOS Energy Drink Sprint Car Series Eldora Speedway win of the year Wednesday night, during the make-up #LetsRaceTwo event – sweeping the #LetRaceTwo races for the second year in-a-row.

To Schatz, though, there is no “magic.” It’s a matter of knowing what to do, he said, and having the experience to do it.

“The misconception in this sport is there’s always something magic, there’s one thing you can do to make yourself better,” said Schatz, 10-time Series champion from Fargo, N.D. “It’s not. It’s ten thousand little things and this team has learned that over the years.

“It’s the same today. Probably even more so today. A quarter turn here or there makes a big difference.”


That’s what it took for Schatz to charge from fourth to win in the 30-lap Feature. He started the night winning his Drydene Heat race, and then went on to finish fourth in the DIRTVision Fast Pass Dash – almost four seconds behind leader Carson Macedo.

Then “a quarter turn here and there” before the Feature. When field erupted into a thunderous echo across the half-mile speedway and charged to the green flag, it was already clear the adjustments worked.

When the field exited turn four at the start, the race took on a different appearance. Brad Sweet had darted by polesitter Carson Macedo for the lead and Schatz stole third from David Gravel. The reigning champion then tried to steal second away from Macedo in turn one, but the rookie had the stronger run off turn two. His Chevrolet Accessories No. 2 launched underneath Schatz’s Toco Warranty No. 15 down the backstretch, and he cleared him into turn three.

The veteran and the rookie battled side-by-side for the next four laps with experience winning the fight. While Macedo played his luck, running as close as he could to the outside wall, Schatz cruised around the bottom line of the track – the same line he used to win at Eldora in May.

A lap after passing Macedo, Schatz, again, used the low line to his advantage, sneaking underneath leader Sweet in turn one and throttling past him off turn two.

From there, Schatz made being fast around Eldora look easy. Lap after lap, he added another car length distance between he and second-place. Even when the field was brought back together for a caution on Lap 15 – due to Kerry Madsen coming to a stop on the track – Schatz pulled away on the restart and left the field to fight for second.

Behind him, though, the hard charger of the year was coming. Logan Schuchart – who has earned the most Hard Charger awards this year, so far, with five – was making another impressive run to the front.

Schuchart started the race seventh and found himself in sixth when the caution for Madsen came out. On the restart, though, he wasn’t going to let the leaders run away. With the throttle down, the Drydene No. 1s darted to fourth by the time the field reached turn one and carried that momentum off turn two to claim third from Gravel.

From there the hunt was one. With a head of steam, while rim riding around the track, Schuchart charged his way past Sweet for second with 12 laps to go. Next on his list, Schatz. Schuchart had finished second to Schatz for the last three #LetsRaceTwo events. It was time for a change.

However, even with finding speed along the high side of the track, it still wasn’t enough to outpace Schatz.

“I was a little loose, and I think that’s why I was good on the restarts,” Schuchart said. “I’d be good for about three or four laps and then I’d start slowing down again, especially when I got the tires hot.”

With eight laps to go, a new contender emerged. Gravel found traction and got in a rhythm, passing Sweet for third. Five laps later, he found himself in second after dueling with Schuchart for a couple of laps. He, too, marked Schatz next on his list, but, again, the reigning champion was still too strong. Even with trying different lines around lap cars.

“I closed a little, but lap cars slowed him down a little bit and he started moving around,” Gravel said. “I have a good feeling we’re really close, just going to keep tuning on this thing and hoping we can beat the 15 car.”

Schatz held almost a straightaway lead over Gravel when he saw the checkered flags for the fifth time this year – becoming the second most winning driver, so far, behind nine-time winner Brad Sweet – and for his 288th career World of Outlaws win. It was also his second win in-a-row after winning the last Series race at Wilmot Raceway.

His win took a small bite out of Sweet’s points lead, again, too. Schatz is now 30-points behind the Kasey Kahne Racing driver.

Even though he claimed his last two wins in dominating fashion, Schatz admitted a wrong “quarter turn here or there” can be the difference between winning and struggling.

With three more races at Eldora Speedway to go – leading up to the $175,000-to-win Kings Royal on Saturday – Schatz isn’t looking to magic to keep his winning streak going. It’s the determination of his team to never give up and never settle. Even after a win.

“Even though we won a race tonight, they’re (the race team) going to go to bed tonight thinking about things to be better,” Schatz said. “That’s what it takes.”

The World of Outlaws NOS Energy Drink Sprint Car Series will return to Eldora Speedway Thursday, July 18, for the Jokers Wild. Get tickets and information.