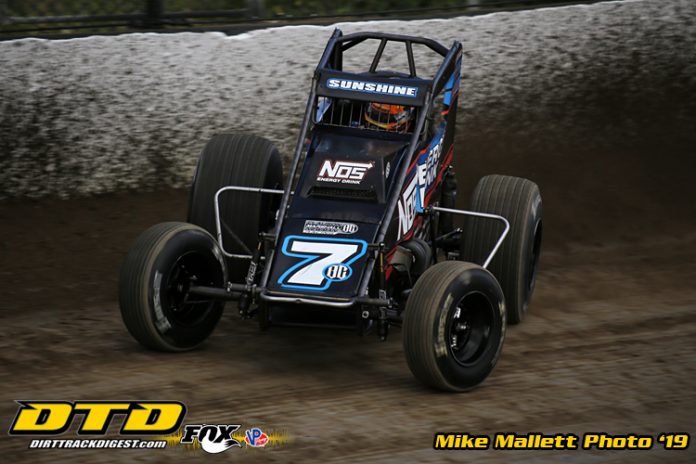 ROSSBURG, OH – Throughout the past 199 USAC AMSOIL National Sprint Car races held at Eldora Speedway, there are just a few who’ve displayed the kind of sustained dominance on the western Ohio half-mile that Tyler Courtney has shown over the past 10 months.

In the 200th series race Wednesday at the “Big E,” Courtney put one in the record books as just the fourth driver to win three-straight USAC National Sprint Car features at Eldora. Jud Larson was the first to do it in 1964-65, followed by Bubby Jones in 1978-79 and Jack Hewitt, who put together two sets of back-to-back-to-back victories in 1988 and 1990-91, already putting Courtney in exclusive company in his young career.

Not to mention, the victory was worth $10,000, as the Indianapolis, Ind. native became the 29th driver to join the 20-win club with the series and now stands just one win behind equaling 1967 champ Greg Weld for the next rung on the ladder.

“It seems like we win every race that doesn’t pay any money,” #LetsRaceTwo winner Courtney said with a laugh. “It’s really cool to win $10,000. Thank you to Roger Slack, Tony Stewart and everybody here at Eldora for putting up the money. It’s really cool to win the 200thUSAC (Sprint Car) race here. For people who appreciate history, like myself, that’s pretty neat to put my name in the record book.”


Courtney started third and, for all intents and purposes, on this particular night, it was over by the end of the first lap. Kevin Thomas, Jr. began the race from the pole and took a run for the lead, sliding side-by-side alongside outside front row starter Chase Stockon through turns one and two.

Courtney rode it high around the outside of Thomas exiting turn two, cut across and dove to the bottom to slide past Stockon entering turn three. Courtney glided up to the exit of turn four as Stockon mounted a charge underneath. Courtney, though, got the upper hand, and the momentum, to lead by a car length at the line.

That was as close as it ever got.

As C.J. Leary, Brady Bacon and Chase Stockon battled for second, going three-wide at times, Courtney was in another zip code, building up his lead to a half-straight by lap six and a full-straightaway by the 10th lap.

Just before midway, Courtney began to navigate lapped traffic. There, his lead wasn’t exactly shrinking by any means, but it had stagnated at about a 4.8 second interval. When the caution fell with 14 laps remaining, on paper, it would initially appear to be a light at the end of the tunnel for the likes of Leary and Bacon who were trying to chase Courtney down in traffic.

In reality, with four lapped cars separating first and second, all it did was provide an open track for Courtney to run a qualifying simulation for much of the second half of the 30-lapper. All four lapped cars hopped on the bottom heading to turn one on the lap 17 restart, allowing Leary and Bacon to roam free unhindered up top. Courtney checked out once again, putting up a 2.5 second lead on the board within just three laps of the restart, never missing a beat.

With five to go, it was back to a full-straight lead for Courtney again. Back behind him, recent Knoxville $20K winner Bacon dug deep to find something to get around Leary for second. Instead, he found the concrete between turns three and four, subsequently bending the front axle. He drove it into one with quite different handling characteristics this time around, smacking the outside wall on the opposite end of the track where he rode wall for a ways before landing on all fours and soldiering on.

Leary snapped away from Bacon to close the door on that battle for position, putting the top-three from first to third a half-lap apart from each other with four to go.

Tyler Courtney, of Indianapolis, Ind., became the 29th driver to join the 20-win club with the series and now stands just one win behind equaling 1967 champ Greg Weld for the next rung on the ladder at 21.
(Rich Forman Photo)

All Courtney had to wonder on the final lap was whether lapped traffic would become any type of hindrance to his blistering five-plus second margin. Courtney split the lapped cars of Jason McDougal and Matt Goodnight into turn one and put the right rear up on the rim to ride home to his third USAC AMSOIL National Sprint Car victory of the year, and third on a half-mile track, 5.336 seconds ahead of Leary, Bacon, Stockon and Chris Windom.

Right now, Courtney, his team and his Clauson Marshall Newman Racing/NOS Energy Drink – Competition Suspension, Inc./Spike/Rider Chevy are in unison. It’s quite important heading into the portion of the season which comprises one-fourth of the entire year’s schedule in a span of 11 days.

“When you put all the right things together, usually good things happen,” Courtney said. “We’ve got a really good team right now. Rizzy (Crew Chief Tyler Ransbottom)’s on his game right now. We kind of messed up a little bit in Knoxville, but he was determined to make right on that, and I think we did tonight. It’s nice to get a momentum boost going into Indiana Sprint Week here the next few nights. Hopefully we can keep going.”

If you’re wondering, yes, your eyes aren’t deceiving you. The top-three of Courtney, Leary and Bacon is the same exact top-three from the series’ first visit to the track in May.

Meanwhile, in qualifying, Justin Grant set Fatheadz Eyewear fast time for the 22nd time in his USAC AMSOIL National Sprint Car career, tying him with Steve Butler with 18th all-time. He collected a total of $300 for his qualifying efforts courtesy of ProSource and Fatheadz Eyewear.