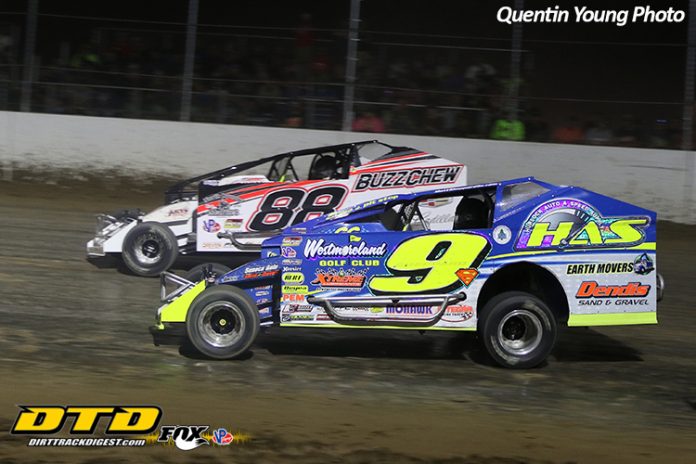 WEEDSPORT, NY – Weedsport Speedway will roar to life once again on Sunday, July 28 for the Super DIRTcar Series Big Block Modified Hall of Fame 100, paying $10,000 to the winner along with a guaranteed starting spot in the NAPA Auto Parts Super DIRT Week Billy Whittaker Cars 200.

The Hall of Fame 100 will mark the second of three stops for the Super DIRTcar Series to Weedsport, as Ransomville, NY driver Erick Rudolph looks to keep his run alive at The Port.

Rudolph has won the last two series stops at Weedsport coming in as the defending champion of the Hall of Fame 100, his first career Big Block win at Weedsport, as well as the winner of the Heroes Remembered 100 on Memorial Day.

Over the course of the last year, nobody has stood on top of Weedsport Speedway’s Victory Hill more than Rudolph in Modified competition.

The third-generation racer added yet another Series victory at Weedsport last October by winning the 358-Modified Series event at The Port during Super DIRT Week.


Rudolph aims to continue that momentum in this year’s Hall of Fame 100, as he looks to battle his way back to the top of the Super DIRTcar Series point standings.

Despite being fast all year long, an up and down campaign has dropped Rudolph to sixth in the series points as of July 17, seeing his lone Weedsport win coupled with two Top 5 finishes and three Top 10 runs in the first six events of the year.

Rudolph will be joined in the Hall of Fame 100 by a long list of Modified contenders hoping to knock him off Victory Hill including Matt Sheppard, Larry Wight, Mat Williamson, Jimmy Phelps, Billy Decker, Peter Bitten, Danny Johnson, Mike Mahaney and more.

The Hall of Fame 100 comes in the middle of a busy stretch of July action for the Super DIRTcar Series which sees six events scheduled across two weeks including stops at Orange County Fair Speedway, Autodrome Drummond and Autodrome Granby as well as Sharon Speedway and Eldora Speedway.

Joining the Super DIRTcar Series Big Block Modifieds as part of the Hall of Fame 100 will be the DIRTcar Sportsman as well as the Classics on DIRT.

Pit gates will open on July 28 at 4 p.m. with grandstand gates opening at 5 p.m.  Racing will start for the evening at 7 p.m.

The Sunday, July 28 Hall of Fame 100 is the culmination of a full weekend of action at Weedsport.

The Northeast Dirt Modified Hall of Fame Induction Ceremony will take place on Thursday, July 25 as drivers Danny Johnson, Pat O’Brien and Ray Brown will all be inducted.

On Saturday, July 27, round three of the Performance Manufacturing Super Kart Series at Weedsport Kartway will take place.  Action will begin at 2 p.m.

Following the Hall of Fame 100, the Super DIRTcar Series Big Block Modifieds will next return to Weedsport Speedway on Monday, September 2 for the Labor Day 100.