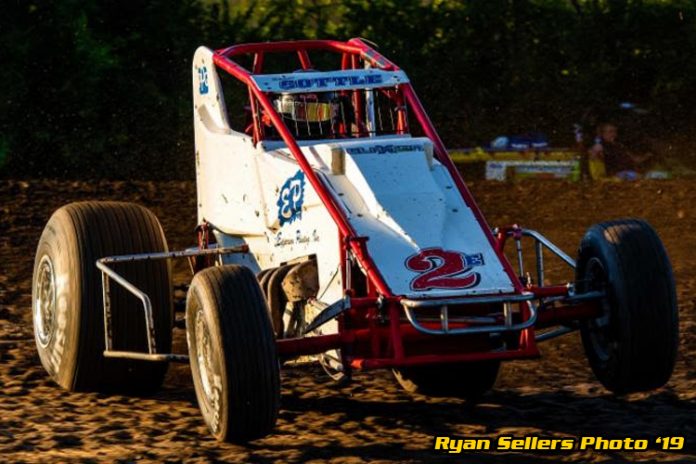 GAS CITY, IN – No longer will Shane Cottle have to answer the question of when his day will come during NOS Energy Drink Indiana Sprint Week.

It took 72 ISW feature starts for the Kansas, Ill. native to get his long-awaited breakthrough, and the way it all unfolded in Thursday night’s opener at Gas City I-69 Speedway will be one that won’t be forgotten anytime soon.

Starting 18th, Cottle picked his way through the field and positioned himself second with five laps remaining. Cottle worked the bottom as Leary operated up top and, on the final corner of the lap, Cottle surged ahead to beat Leary to the stripe for the win in one of the closest finishes in USAC racing history.

According to Cottle, his feelings following the dramatic final lap heroics were only comparable to his 2008 victory at Anderson Speedway’s Little 500. Cottle’s third career USAC National Sprint Car victory is the first series win for him since 2008, which also came at Gas City. In fact, all three of his wins have come on the quarter mile at Gas City dating back to his first career USAC victory in 2006.

Mired on the outside of the ninth row for the start of the 30-lap feature, it didn’t take long for Cottle to realize he had something special on this night with a car that could take him to the front. He moved up three positions on the opening lap to 15th, then hovered around the edge of the top-ten for the remainder of the first half.

“I knew pretty quickly,” Cottle said when asked when he knew he had a winning car. “I just knew that if I got to the bottom, we were going to be good as long as we could just pick them off one at a time. We got the right yellows at the right time; a lapped car helped us out one time. I tried wrecking it a couple times on those infield tires. The car was really good, and it was fun to drive.”

On the 17th lap, ninth-running Thomas Meseraull got sideways at the entrance of turn three. Eleventh place driver Tyler Courtney had nowhere to go and plowed into the side of Meseraull, sending both to the sidelines for the remainder of the night.

When racing resumed, a pair of lapped cars separated leader Leary from the second-place car of Kevin Thomas, Jr. Leary had a near-perfect restart to open up his lead to 1.5 sec. as Thomas tried to keep tabs. As the pair of 19s broke away from the field, a scramble for third ensued involving the balance of the top-ten all under a figurative blanket. Defending ISW champ Chris Windom was riding high, splitting his way through traffic from ninth to break into the top-three with seven laps remaining while Cottle quietly, but methodically, snuck around the infield tires to move to third by Windom just before the caution.

Twelfth-place Isaac Chapple spun in turn one on the 25th lap, setting up a six-lap race to the finish with race-long dominator Leary out front ahead of Thomas while Cottle raised curiosity if he could continue his upward trajectory through the field in the final laps.

On the restart, Cottle stuck to his guns on the low line and pulled even with Thomas off the bottom of turn two before finally clearing him with a drive off the bottom of four to secure second. Now, the test was administered to see whose strategy would prevail, if Leary could continue to rip the top or if Cottle could breeze the infield tires to the front. It takes a virtue of patience to stay the course, to stuck with what got you there, to go low and slow into the corner as the driver beside you gasses it up and pulls away, momentarily, entering the corner.

“I could see him up there,” Cottle recalled. “When they’re out there in front of you, you just want to push the gas harder and harder, but you can’t. You just have to roll around there and keep the wheels under you. I messed up a couple times during the last six laps and I thought I gave it away.”

When Cottle initially slipped into second on the 25th lap, he was about five car lengths behind Leary. The same scenario played out lap-after-lap with Leary moving ahead in the corner, and Cottle seeming like his car was pulled by a chain off the corners, quickly erasing Leary’s advantage.

Coming to the white flag, the interval seemingly never wavered between a car length in either direction between the two where they remained side-by-side for the entire duration of the 30th and final lap. Coming off four, with Cottle low and Leary high, the two hit the line nearly simultaneously with Cottle taking the victory over Leary, Windom, Brady Bacon and Thomas.

It was a monumental win for Cottle in many ways, but it was even more special coming with Epperson Racing, the team for which Cottle was associated with for several seasons in the decade of the 2010s and hadn’t driven for in USAC competition since the beginning of the 2016 season in Ocala, Fla. It marked Tony Epperson’s second USAC National Sprint Car victory as an owner following last August’s win at Kokomo (Ind.) Speedway with driver Tyler Thomas.

“I wanted to be the first to get him his USAC win, but Tyler Thomas got it last year,” Cottle remembered. “I was so happy for (Tony) because he’s one of the greatest car owners ever. We got him one tonight and I appreciate everything he does for me.”